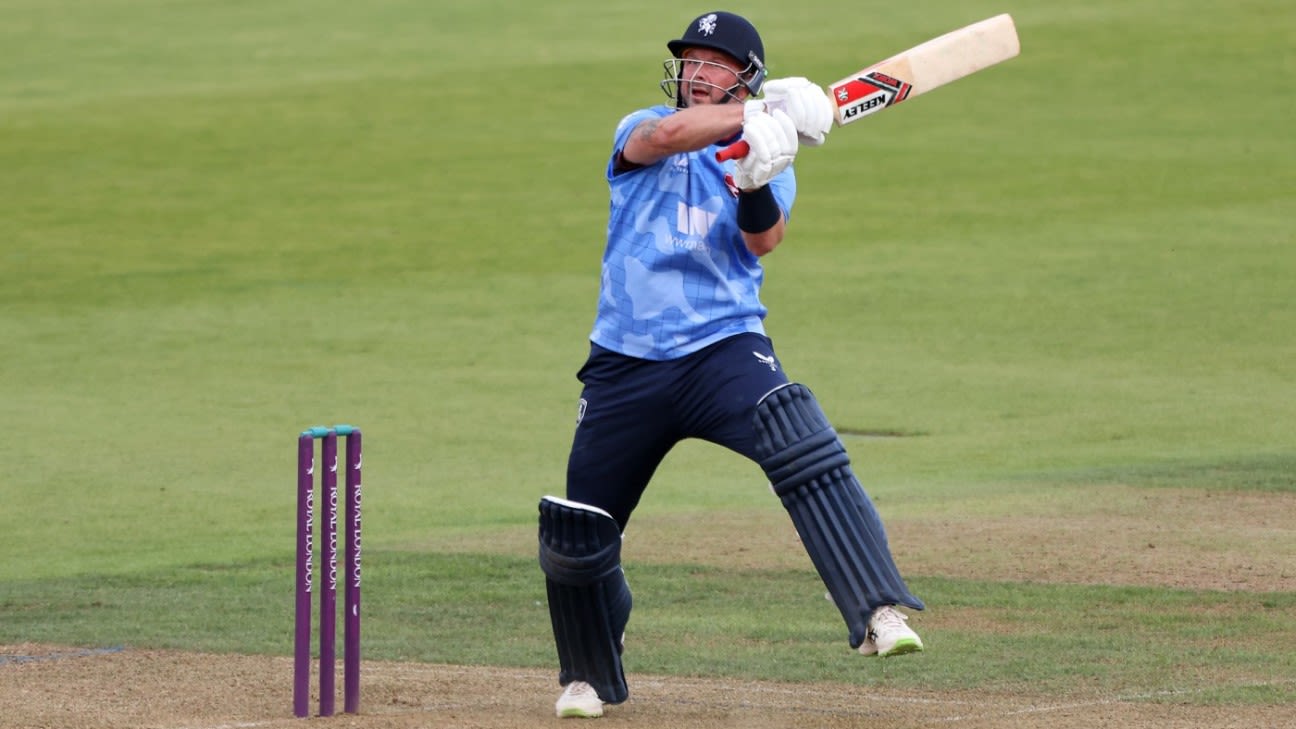 Darren Stevens continued his farewell tour with an outrageous 84 off 65 balls to send Kent Spitfires to the Royal London Cup final and end Hampshire’s hopes of the treble in the process.

Veteran all-rounder Stevens is leaving Kent at the end of this season after they decided not to renew his contract. He will round off his Kent List A career at a one-day final after striking a six off his legs and then a driven four to take his side over the line with an over to spare.

Ollie Robinson‘s 95 and Harry Finch’s 63 had set up Kent’s pursuit of 310 before the 46-year-old marshalled his side to a three-wicket victory.

Kent, who lost to Hampshire in the 2018 final, will face Lancashire in the Trent Bridge showpiece on September 17.

Kent openers Joey Evison and Ben Compton were both dismissed inside the first six overs of the reply, both edging to Scott Currie at second slip. At the other end, Robinson was playing with a sublime touch, with all 12 of his fours coming on the offside to go with a beautifully flicked six.

Joe Denly put on 48 with Robinson before edging behind before Harry Finch arrived to substantially chip away at their task. A quick outfield paired with well-placed shots made scoring seem easy, with the duo’s 100 stand coming in 101 balls. But the momentum swung back towards Hampshire as Robinson spooned to midwicket for 95 and Finch chopped on.

Enter Stevens, on the back of 41 off 24 in the quarter-final.

He bossed a 60-run stand with Grant Stewart, and then dominated a 45 partnership with Harry Podmore. Power was the name of his game, whether it was down the ground or through point; every other ball had the kitchen sink thrown at it. His 50 came at a run-a-ball, before an extraordinary slapped four over extra cover, off a no-ball bouncer, and a checked straight six combo silenced the Ageas Bowl. He even had time to hug umpire David Millns after smashing back at him.

Seventy-two were needed from the last 10 overs, which Stevens expertly systematically knocked off to win with an over to spare.

Earlier, Nick Gubbins and Ben Brown had set the platform with 106 for the first wicket – Hampshire’s highest opening stand of the tournament. Gubbins was dropped on 33 at first slip but moved past 50 for the third time in the competition in 54 balls – brought up with a sweetly timed cut for four.

The impressive start was halted by leggie Hamidullah Qadri in controversial fashion. Brown was adjudged to have been caught at short fine leg, giving a sarcastic thumbs up and applause to the away side on his way off – with club captain James Vince also tweeting his disbelief at the decision. The next delivery, Hampshire’s leading run scorer Tom Prest edged behind.

Aneurin Donald skewed the hat-trick ball away before forging stands of 40 and 42 with Gubbins and, when he had been bowled on 75, Fletcha Middleton, in a controlled half-century.

Another pair of wickets – Donald lbw while attempting a one-handed reverse sweep and Middleton tamely caught at cover – dragged the Spitfires back into things, onl for Toby Albert and Felix Organ to thrash 88 runs in 57 balls.