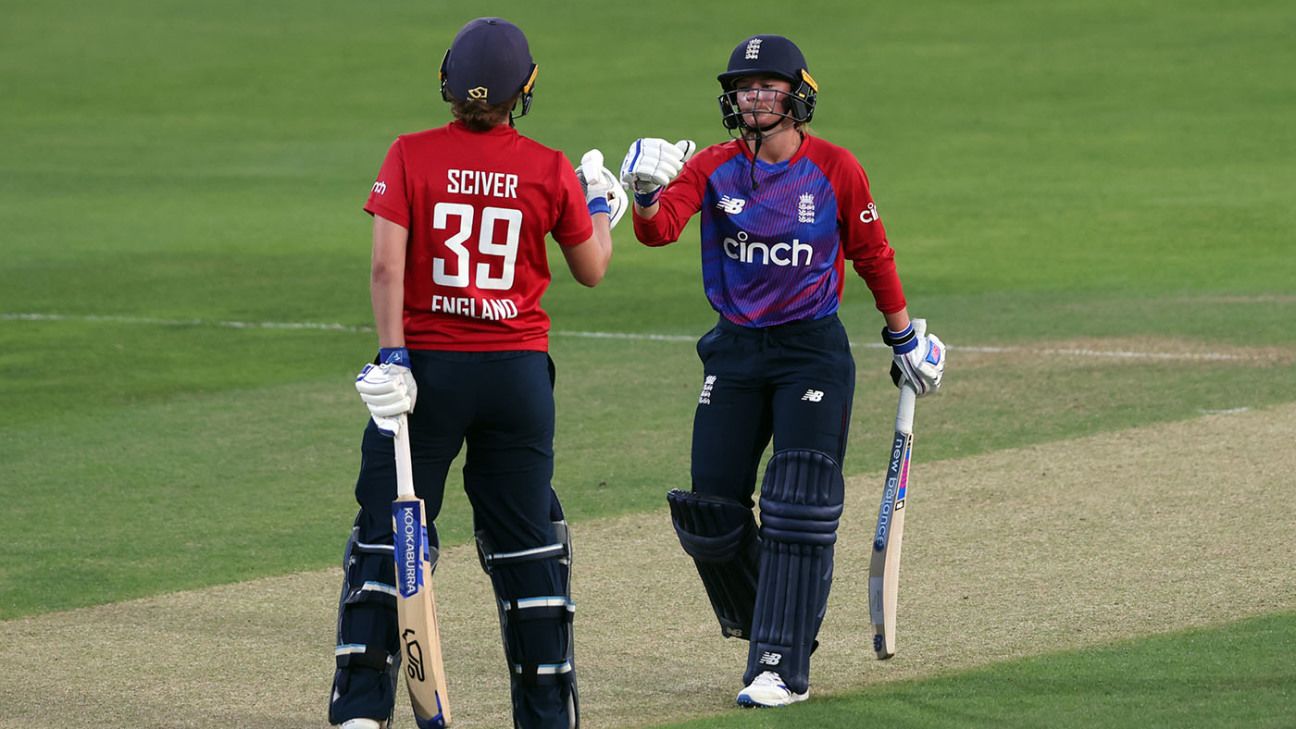 Danni Wyatt‘s unbeaten 89 led England to an eight-wicket victory over India in the third and final T20I to seal victory for the hosts in their multi-format series.
Wyatt reached her score off just 56 deliveries and shared a 112-run partnership with Player of the Series Nat Sciver, who struck an excellent 42 in support, as England overhauled the target of 154 with eight balls to spare at Chelmsford. India reached 153 for 6 on the back of Smriti Mandhana‘s classy 70 off 51 balls, but with only two other batters breaking out of single-figures, their total was found short.

When Sciver fell in the 17th over, bowled by Sneh Rana, it fell to Wyatt and Heather Knight to guide England home and, after a couple of nervous moments when Knight narrowly evaded the fielder at cover in the 18th, they needed 13 off the last 12 balls. A pressure-easing six by Wyatt over deep square leg off Deepti Sharma was followed immediately by a four swept behind square and, fittingly, Wyatt struck the winning run, a single to midwicket.

India’s defeat denied them the chance to draw the series after the sides took two points each from the drawn Test before England claimed both the ODI and T20I legs 2-1 to win 10-6 overall.

Overlooked for the ODI leg of the series, despite having scored three half-centuries in the 50-over Rachael Heyhoe Flint Trophy, Wyatt brought up her eighth T20I fifty – and first in 19 innings since December 2019 – with a four through point off Shikha Pandey. The stroke, her eighth boundary of 12 for the innings, also brought up the team hundred and she helped herself to another from the next ball. After scores of 31 and 3 in the previous two T20Is against India, Wyatt was under some pressure to produce an innings of note.

Having seen opening partner Tammy Beaumont fall lbw to Sharma for just 11, Wyatt played an intelligent innings of deft placement, excellent timing and authority. In the fifth over, she struck Rana for three fours, clearing the covers either side of a neat glance through third man, to help England to 42 for 1 at the end of the Powerplay. Consecutive fours swept off Poonam Yadav followed and, at the halfway point of the innings, England needed 72 runs. That the powerful and in-form Sciver played the supporting role in their union highlighted Wyatt’s fine touch.

Having been hauled for five consecutive fours by Shafali Verma in the previous match at Hove on Sunday, which India won in an eight-run thriller, there was a sense of unfinished business for experienced England seamer Katherine Brunt. Just four balls into this match, Brunt ended Verma’s knock, an inside-edge on to her own stumps bringing a second-ball duck. Brunt showed that the wicket meant something too, placing a finger to her lips in a “shushing” motion in her follow-through as Verma trudged off – though she later said it wasn’t aimed at her opponent.

After her initial three-over spell, Brunt was re-introduced to the attack in the 17th as England looked to prise out a dangerous-looking Mandhana. Brunt obliged with her second ball back, which Mandhana picked up on the full and sent to Sciver, who took a good low catch at deep midwicket.

Mandhana’s innings was pivotal in raising a competitive total, with Harmanpreet Kaur’s 36 from 26 balls and Richa Ghosh’s excellent cameo of 20 off 13 the only other scores in double-figures for India’s innings.

Having seen Verma and Harleen Deol fall cheaply – India were 28 for 2 at the end of the Powerplay – and just as the run rate was looking a little low, Mandhana launched Freya Davies over the long-off boundary for six. Kaur hit back-to-back fours off Sarah Glenn, swept past deep midwicket and drilled through the covers, before she fell lbw to Sciver. Mandhana then brough up her fifty with four off Davies through deep square leg and found the long-leg boundary for four more off a low full toss from Davies two balls later.

Rana would have been comfortably run out at the non-striker’s end when she and Mandhana ran a second off Davies, the bowler fumbling Wyatt’s throw in. Mandhana then slog-swept Sophie Ecclestone for six before Ecclestone bowled Rana. Mandhana had one more boundary in her, advancing to Brunt and chipping over mid-off, before she fell.

Ghosh, India’s other prodigiously talented 17-year-old alongside Verma, responded to Mandhana’s dismissal by hitting Brunt’s next two balls for four through mid-on, the first beating a slightly hesitant Ecclestone and met with a scream of “Oh my god!” from Brunt. Ghosh then hit Ecclestone for consecutive fours over short fine leg and backward point before Ecclestone finally beat her with an arm ball that clipped the top of leg stump.