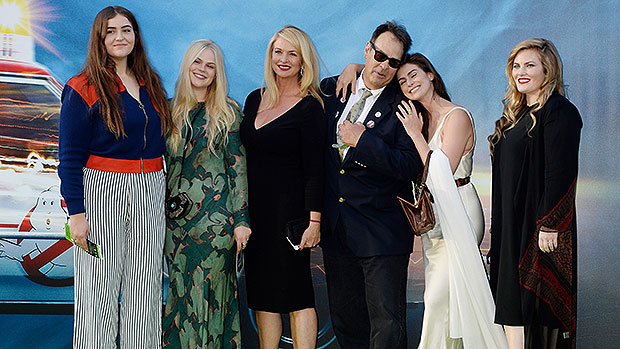 Dan Aykroyd, 69, is one of Hollywood’s most lovable actors, but he’s also a doting dad! The Ghostbusters star shares three adult daughters, including Danielle aka Vera Sola, 32, Belle, 28, and Stella, 24, with Donna Dixon, 64, whom he announced his separation from on April 30. Although the former lovebirds are splitting after almost 40 years of marriage, their strong bond with their children will remain, and from the memorable moments they’ve shared together over the years, it’s clear to see they’ve been a tightknit family.

Find out more about Dan and Donna’s daughters below.

Danielle Aykroyd, who is professionally known as Vera Sola, is Dan and Donna’s oldest daughter. She was born in Nov. 1989 and has had a career as a poet and singer-songwriter. She studied under Jorie Graham at Harvard University and worked as a voice actor and on the radio after graduating. Her music career took off when she joined friend and songwriter Elvis Perkins‘ touring band and in 2017, she decided to pursue a solo music career.

She self-released her debut album, Shades, in 2018 and performed, produced, and arranged everything on it. Danielle has previously admitted that she came up with her stage name, Vera, because she wanted to establish a career on her own and not use her famous last name to catapult into music. She often takes to social media to promote her music and share various selfies whenever she can.

Belle is Dan and Donna’s second-born child. She was welcomed into the world in June 1993 and has followed in her dad’s footsteps by working as an actress. She’s appeared in various features, including the TV series, Workin’ Moms, the short IRL, and the film, Highway One. Although she tends to keep a low profile when she’s not acting, the supportive daughter sometimes boasts about her dad and his achievements on social media.

She shared a series of photos of her, Dan, and her younger sister Stella hanging out on the set of the 2021 film Ghostbusters: Afterlife in Dec. and admitted she was “proud” of the movie in the caption. “Proud of this film and this legacy @ghostbustersafterlife thank you @jasonreitman,” she wrote.

Stella is Dan and Donna’s youngest daughter. She was born in April 1998 and has also worked as an actress. She appeared alongside her dad in the 2021 film Ghostbusters: Afterlife, in which she played the role of Deputy Medjuck, and it was her first full-length feature. She’s also appeared in the TV series Born to Explore and the video short Don’t Mind Alice.

Stella’s Instagram page is full of various interesting photos of places and people and things she loves, including her adorable animals. She appears to have a close relationship with her sisters and often shares pics and videos of memorable moments they’ve shared like going on walks and singing while riding around in cars.