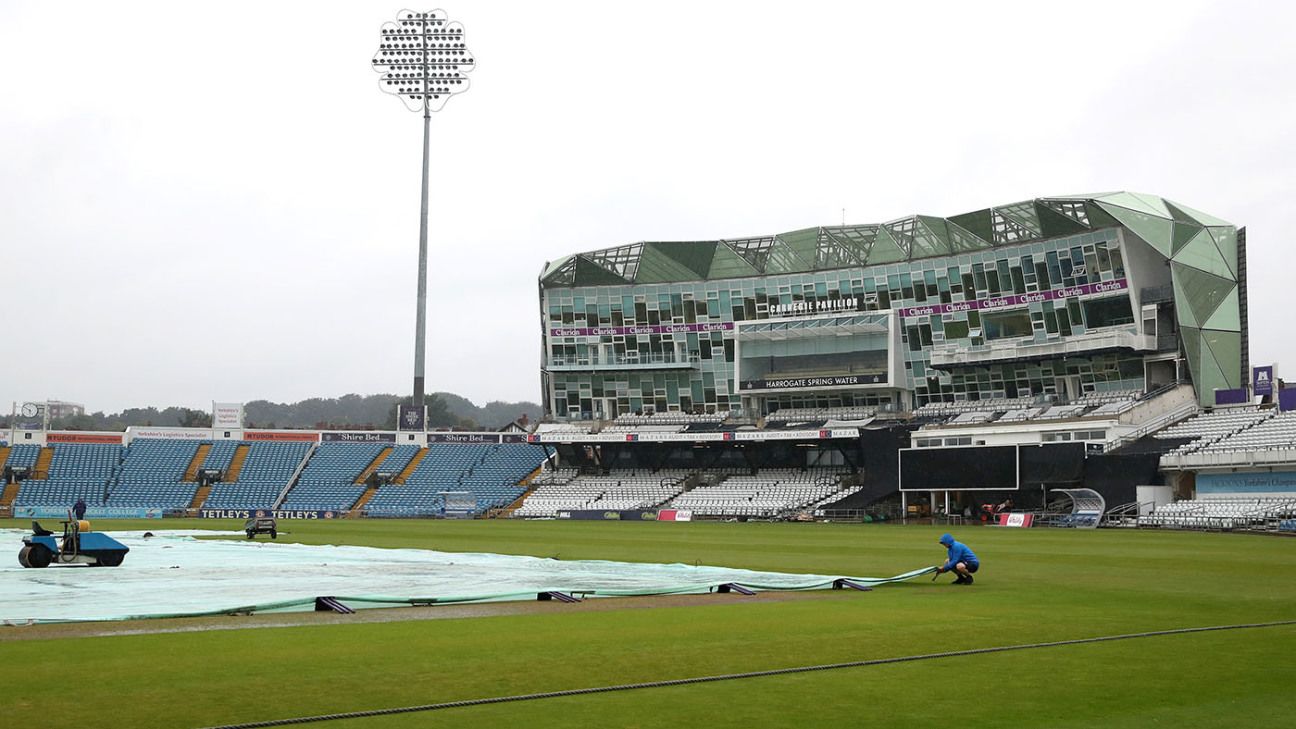 No play was possible on the final day of the drawn Roses LV= Insurance County Championship fixture between Yorkshire and Lancashire at Emerald Headingley due to a wet outfield.

Umpires Ian Gould and Nigel Llong inspected the problematic Emerald Stand End of the ground, which also forced the abandonment of yesterday’s play 7.2 overs into the afternoon.

Gould, Llong and both coaches and captains were involved in lengthy early morning discussions, and play was called off just after 10am. England’s cricketers are due to play a T20I against Pakistan at Headingley on Sunday.

Both counties had already qualified for the late season top group in the Championship before this final round Group Three fixture, which has seen two days abandoned completely and only 23.2 overs bowled on day three.

Having won the reverse fixture at Emirates Old Trafford in late May, Lancashire will carry forwards 16.5 points and Yorkshire 4.5 into the top group, when four more games will be played to decide the county champions and the Bob Willis Trophy finalists.

“We’re disappointed,” Steve Patterson, Yorkshire’s captain, said. “We’d have loved to play some cricket today with points up for grabs to take through to the next round.

“But the way I look at it is that you have two of the most experienced umpires in the country who are very, very good at their job.

“They thought the safety of the players couldn’t be guaranteed and made the tough decision to call it off.

“As frustrating as it is from a cricket perspective, we accept their decision. I believe they made the right call, and I back them.”

The carrying forward of points was the reason this fixture was of major importance. Yorkshire finish this fixture with eight points to Group Three winners Lancashire’s 11.

Yesterday’s third day was abandoned due to unsafe conditions, though the decision was not a direct consequence of the leg injury suffered by Yorkshire’s young fast bowler Dom Leech whilst fielding on the boundary in front of the Western Terrace.

Yorkshire this morning released an update on his condition. They said: “Dom Leech has dislocated a joint at the side of his left knee.

“An X-ray has shown no broken bones, and Leech will have an MRI scan today. The fast bowler is scheduled to see a specialist tomorrow.”

Lancashire coach, Glen Chapple, added: “We knew yesterday the outfield was struggling to deal with the water that had fallen on the previous days. Unfortunately, things haven’t changed a great deal this morning. The outfield is still soft. It’s obvious that won’t repair in one day.

“From both teams’ perspective, I think everyone has dealt with it fairly and with a level head. I’m delighted with the points we are carrying forward. If you go back to April, I’d have snatched your hand off for what we’ve got and what we’ve achieved so far.”

The abandonment means England’s James Anderson has not bowled a ball in two of his four Championship appearances for Lancashire this summer.

Their game against Northamptonshire at Wantage Road in May was also heavily weather-affected. In all, ahead of the forthcoming Test series with India, Anderson has taken 11 wickets for the Red Rose in 2021, including a career-best 7 for 19 against Kent last week.

Lancashire’s statement on the abandonment read: “Unfortunately the final day’s play of the Roses clash at Emerald Headingley has been abandoned.

“Conditions at the Emerald Stand End of the ground have not sufficiently improved, and it has therefore been deemed unfit and unsafe to play.

“The umpires inspected at 9am and made the decision to abandon the game. All parties agreed that player safety is paramount.”