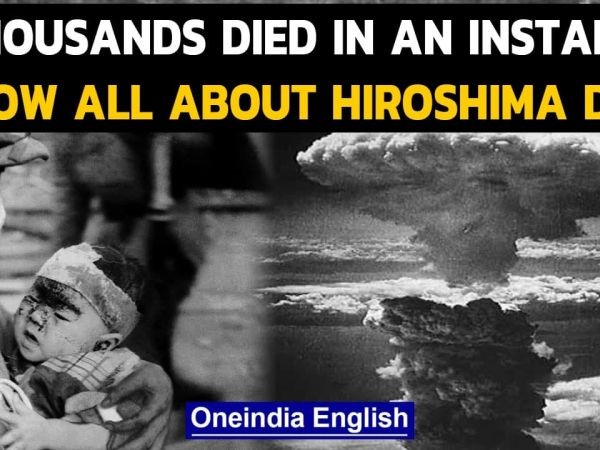 There is presently a conflict going on in Ukraine. And there might break out another one in Taiwan. In both cases, aggressors are nuclear-powered neighbors. And it’s scary!
It’s under these circumstances, that we are going to commemorate pro-peace, anti-nuclear, and anti-war Nagasaki Day.

Hiroshima Day is observed on 6 August. And Nagasaki Day is observed on 9 August. Pro-peace and anti-war demonstrations are held world-over in remembrance of deceased – most of them civilians who had nothing to do with war. These two days are a scary reminder of the hell the world will turn into if nuclear weapons – much more powerful now than those used then – are used ever again.

How many people were killed in Hiroshima and Nagasaki?

Somewhere between 1.3 – 2.3 lakh people – half of them instantly – were killed.
Even those who somehow survived the bombing suffered immensely. Radiation caused by the bombing later gave rise to diseases like cancer, thyroid, and leukemia. And the radiation-induced disease is not the only thing they suffered. They also suffered social discrimination. They become a pariah – a social outcast, somebody untouchable due to being affected by radiation.

Facts about the bombs dropped on Hiroshima and Nagasaki

The bomb dropped on Hiroshima was a uranium-based nuclear weapon. It had an innocent-sounding name: The Little Boy. And this little boy – with about 15 kilotons of blast capacity – wiped off almost 40% of the city population.

The nuclear bomb detonated on Nagasaki was even more devastating. It had a blast capacity of 22 kilotons – 7 kilotons higher than that of Hiroshima’s. This heavier and more powerful plutonium-based nuclear bomb went by the name ‘Fatman’.

What was it like when the nuclear bomb dropped?

At first, it was blindingly white, like the sun has come down in the nearby backyard; with the temperature exploding to as high as 4,000 degrees Celsius.
There was no explosive sound that we normally associate with a bomb blast. Then everything fell dark and silent. With thousands burned, buried, or evaporated in between.

Why did Japan surrender immediately after the bombings?

The devastation was so massive and scary that Japan succumbed to unconditional surrender 6 days later on August 15.

Why did they bomb Nagasaki instead of Kokura?

With the war in Europe over after the German surrender, the US wanted to quickly conclude the conflict in the pacific as well. They wanted to avoid the heavy casualties that fighting conventionally with the Japanese – who were resorting to an increased number of suicide attacks with every passing day – would have caused.

The US had zeroed in on five targets for the nuclear attack: Kokura, Hiroshima, Yokohama, Niigata, and Kyoto. Yes, there was no Nagasaki on the list initially.

The then US secretary of War Henry Stimson had spent his honeymoon in the city of Kyoto. He didn’t want to ruin his fond memories and thus got the city of Kyoto removed from the list and replaced by Nagasaki.
Nagasaki would still have survived on that fateful day as it wasn’t the primary target. Kokura was!
But due to clouds and smoke covering much of the sky of Kokura, the bombers decided to move on to Nagasaki.