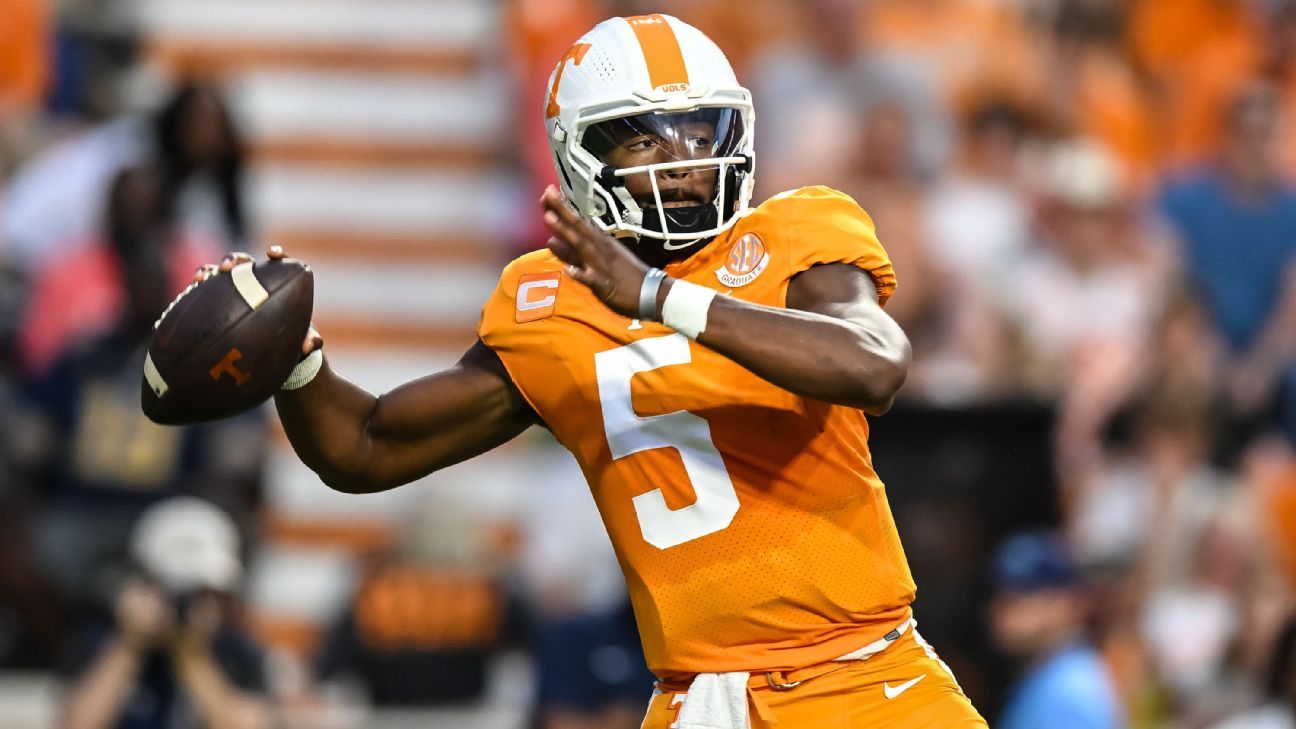 Sure, we’ll miss the nonconference battles like Appalachian State upsetting Texas A&M in College Station or Georgia proving why the title still runs through Athens, but conference play is where seasons are defined.

Saturday’s schedule kicks off with some historic matchups and newfound rivalries. Wake Forest welcomes Clemson to town in what should be a litmus test for the program while Ohio State hosts Wisconsin in an age-old rivalry that has been a little one-sided of late.

Speaking of recent lopsided rivalries, Florida travels to Tennessee, where the Vols are favored despite their ineptitude in the SEC East clash over the past couple of decades. Arkansas and Texas A&M meet in the Southwest Classic, where the Hogs erased a nine-year losing streak last year and, while it isn’t a conference game, Kansas and Duke play in a battle of unbeatens — yes, you read that right.

With October around the corner and the season heating up while the temperatures cool down, these are college football’s top storylines this weekend.

A week ago, Liberty‘s Dennis Osagiede raised eyebrows by calling the Wake Forest offense “cute.” Get pressure on Sam Hartman, he surmised, and the Deacons were vulnerable.

Turns out, he was right.

Of course, suggesting a QB under pressure performs worse than one who’s not isn’t exactly breaking news, but the key to Liberty’s near-upset was the Flames’ ability to disrupt the Wake backfield. The Deacons all but abandoned their run game, and Hartman had an up-and-down day. Through three games now, Wake’s QBs are 5-for-13 with an interception and six sacks when pressured, with a raw QBR of 0.5 — second-worst in FBS.

Here’s the real problem: This week, the Deacons get Clemson, which may have the best defensive front in college football.

“That’s where we lost this game a year ago,” Wake coach Dave Clawson said. “I mean, right away. How many sacks did we have in the first quarter?”

The answer: four. Wake averaged about a half-yard per dropback in the first quarter of last year’s 48-27 loss to the Tigers, and frankly, Clawson said, there weren’t many answers up front. Clemson brought exotic looks, stacked the box, blitzed repeatedly. That helped neutralize Wake’s biggest asset — a deep and talented receiving corps that had feasted on explosive plays.

“Trying to mess up their timing, on the back end, it helps,” Clemson co-defensive coordinator Mickey Conn said. “That’s a big part of defensive football.”

The line of scrimmage offers a clear advantage for the Tigers.

Clemson has NFL-caliber talent across the D-line, from Bryan Bresee to Tyler Davis, K.J. Henry to Myles Murphy.

What Wake has is an experienced O-line with far less pedigree.

That’s largely been the difference between the Deacons and the big, bad Clemson Tigers, who’ve won every head-to-head matchup dating back 15 years, including last season, when Wake won the division title but still proved no match for the Tigers on the field.

“It’s a little bit the nature of our offense is they outnumber us in the box,” Clawson said. “Last year, we didn’t execute the passing game, in part, because of the pressure. We didn’t protect well enough. They’re not going to let us run the ball. They never have. And they’re going to pressure the quarterback and be disruptive. That’s the game. Can we protect long enough to get guys open?” — David M. Hale

It took Josh Heupel all of what he says was “probably 30 seconds” once he arrived on Tennessee’s campus as coach last year to realize what the Florida game means to the folks on Rocky Top.

Once one of the most anticipated rivalries on the field in the SEC, the Florida-Tennessee rivalry has been a rivalry in name only for much of the past two decades. The Gators enter Saturday’s game at Neyland Stadium having won 16 of the last 17 meetings in the series.

Heupel isn’t much of a believer in psychological hurdles. He’s changed the environment inside the Tennessee football complex and brought a much-needed steadiness to the program. The Vols are up to No. 11 in the latest AP poll and playing with as much confidence and momentum as they have in years.

“Our kids are extremely confident, as they should be,” Heupel said. “They’ve prepared the right way. They’ve worked hard, and we continue to grow. They know that preparation is going to be the most important thing.”

In other words, Heupel isn’t seeing ghosts. He has a veteran quarterback in Hendon Hooker, who has accounted for 42 touchdowns, thrown just two interceptions and completed 68% of his passes since taking over as the starter a year ago in Week 3.

It’s always a plus in these types of games to have a seasoned quarterback. Florida’s Anthony Richardson is still learning how to play the position, but has uncanny athletic ability and a huge upside. But after dazzling in the season-opening win over Utah, he’s thrown four interceptions in his last two games and has yet to throw a touchdown pass this season. The 6-4, 232-pound Richardson may look to run more in this game and test the Tennessee defense on the edge. He rushed for 106 yards and three touchdowns against Utah, but the next week, Kentucky kept one player assigned to Richardson (a spy) and limited him to just 4 yards on six carries.

An even more important matchup in this game is Florida’s front seven on defense against a Tennessee offense that operates at warp speed and averages 7.1 yards per play. The Gators allowed 230 rushing yards against Utah and 286 rushing yards last week in a 31-28 win over South Florida. The Vols’ running game is augmented by Hooker’s ability to run on zone read plays, and they’ve also hurt teams with explosive plays. In three games, they already have seven plays from scrimmage of 40 yards or longer.

This will be Florida’s first road game of the season and Richardson’s first career start in a true road game. Napier, while not specifically dissing the environment at Neyland Stadium, nonetheless stoked the fires among Tennessee fans when he downplayed what a road environment would mean for Richardson.

It’s been 17 years — seventeen — since Wisconsin has won at Ohio State, and it would be a jaw-dropping, field-storming upset if it happened on Saturday.

(Not that we’ve seen any of those this season.)

Unranked Wisconsin, which is 1-2 in three straight home games and has yet to beat a Power 5 team, hasn’t defeated the Buckeyes since 2010, and hasn’t won in the Shoe since 2004. The Badgers are making their first road trip for what will be the Big Ten opener for both teams, and ESPN’s FPI gives Ohio State an 89% chance to win.

Here’s why Wisconsin has a shred of hope: The Badgers can run the ball, control the clock and boast one of the nation’s best defenses. Since 2015, Wisconsin’s opponents have scored a touchdown on just 46.4% of red zone drives, the lowest percentage allowed by any team during that span. The Badgers enter Columbus allowing just eight points per game — but are facing an offense that’s averaging 47.7 points.

The statistics for both teams are a bit misleading, as the Buckeyes are coming off a 77-21 win against Toledo, and Wisconsin’s wins were against FCS Illinois State and New Mexico State.

While Ohio State and Wisconsin are in different divisions, they are well aware of what to expect from each other. Wisconsin is notorious for its punishing running game, which this year is led by Braelon Allen. He’s averaging 4.6 rushing yards per attempt after contact, the third-most in FBS among players with at least 40 rushes.

Wisconsin’s first-year offensive coordinator, Bobby Engram, has aimed to make the Badgers’ offense more balanced, and so far it’s working. Through the first three games, Wisconsin has 1,436 yards of total offense, 781 through the air and 655 on the ground.

“They’re a lot more multiple than you think when you look at what they’re doing on offense,” Ohio State coach Ryan Day said. “They’re throwing the ball more than they ever have, at least in recent years. We’ve got to be prepared because they are very intelligent. They can handle high levels of information.”

The question is if they can handle Ohio State’s offense. — Heather Dinich

In perhaps the most improbable matchup of undefeated teams this week, Duke (3-0) travels to Kansas (3-0) to play a big early season … football game. Note to lost readers: Their basketball teams, which have combined for nine national titles, are scheduled to play each other Nov. 15.

There are so many “firsts” with both teams, it would take up too much space to include them all. But it is important to point out that Kansas football has had a much longer dry spell than Duke. This is its first 3-0 start since 2009. Duke started 3-0 as recently as 2018, but coach Mike Elko is the first Duke football coach since Fred Goldsmith in 1994 to win his opening three games.

Perhaps most impressive for Kansas is the way the Jayhawks have done it, with two huge come-from-behind victories against West Virginia and Houston on the road. Consider this: The Jayhawks won just three road games total from 2010-21.

Kansas officials are expecting a capacity crowd of 47,233 to fill Memorial Stadium on Saturday, a sign that enthusiasm is high for a team that coach Lance Leipold has rolling right now. That starts with the offense and quarterback Jalon Daniels, who has thrown for seven touchdowns and rushed for three more. The Jayhawks have scored 159 points through three games, matching its best three-game offensive stretch to start the season (2007).

Kansas director of sports performance Matt Gildersleeve has had a front row seat for the transformation of the team, coming with Leipold from Buffalo following the 2020 season. He said every step of the process put in place was intentional. “Every day in this program, we’ve always talked about taking advantage of every day we have to fill the gap of where we were, where we are now and where we want to go.

“I’m so happy for the guys that the work that they put in is all coming to, but they also know we can’t sit there and talk about 3-0. We’re not worried about that. That’s passed. It’s this game right now. It’s this moment.”

Kansas has gone 12 straight seasons winning three or fewer games. The Jayhawks already have their three. That countdown to basketball season needs to be put on hold for the time being.

“The idea of having the opportunity to go take over a program that is considered a basketball school,” Gildersleeve said, “I love that.” — Andrea Adelson

The Aggies are favored in the game by 1.5 points, but have scored just 31 total points in the past two weeks against Appalachian State (a stunning 17-14 loss) and Miami (a 17-9 win).

“I know this sounds crazy, but we’re a lot closer than it seems in some things,” Aggies coach Jimbo Fisher said this week. “We’re getting it and it’s got to keep progressing.”

The Aggies’ offense struggled mightily against the Razorbacks last year, gaining just 272 yards in a 20-10 loss that snapped a nine-game winning streak over Arkansas since the Aggies joined the SEC in 2012.

Could the Razorbacks be the cure for Fisher’s ailing passing attack? Razorbacks coach Sam Pittman is frustrated with his team’s performance in the secondary.

But the Hogs lead the country with 17 sacks, so pressure could be an issue against a struggling Aggies offensive line.

Pittman, meanwhile, isn’t letting on if he thinks he has an advantage.

“I’m sure that coach is working on whatever problems they may have,” he said of Fisher. “I don’t see a lot of them. I see a great opponent we’re getting ready to play.” — Dave Wilson