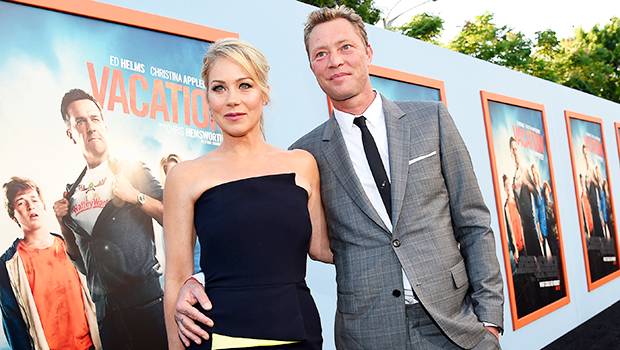 No matter what comes Christina Applegate’s way, she will never face any adversity alone. “I don’t think I would have been able to get through any of it without him,” Christina said in 2009 of her then-boyfriend, Martyn LeNoble. At the time, the Married…With Children star was battling breast cancer. In the years since that, she has had her highs – tying a knot with Martyn, starting a family, appearing in the hit Netflix series Dead To Me – and lows.

In 2022, Christina revealed that she was diagnosed with multiple sclerosis, tweeting, “It’s been a strange journey. But I have been so supported by people that I know who also have this condition. It’s been a tough road. But as we all know, the road keeps going.” As she walks down this road, meet the one who will be by her side – and get the scoop on Christina’s previous relationship with Johnathon Schaech

Martyn LeNoble was born in the Netherlands and seemed destined for a life on the stage. “I was really lucky,” he said in an interview published on the official Thelonious Monster website. “My parents always had a great music collection. A lot of Velvet Underground. Lou Reed, when he went solo. The Beatles, George Harrison. Bob Dylan. Brian Eno. Rolling Stones. … Later on, The Stooges and The Ramones, The Sex Pistols.” Martyn said that he grew up in the first wave of punk and that his parents would have a lot of late-night parties where they played that new and exciting music.

“If you’re a kid laying in your bed, the only thing you can hear is the kick drum and the bass. So I knew the bass lines to every song before I could play an instrument,” says Martyn. He began to play at age 7, starting with the violin. “I didn’t like it at all.” He started playing bass by age 13.

In 1989, he moved to the United States. “I landed here with $75 in my pocket. The first night, I met Pete Weiss [co-founder of the band Thelonious Monster], Dick Rude [underground actor and director], and Angelo Moore [of Fishbone]. … All those people I met that first night and in the years afterward are still my best friends. It’s really cool.”

‘Dead To Me’ Season 3: The Official Trailer, Release Date, & More We Know

Before Martyn and Christina tied the knot in 2013, they were both previously married. Not much is known about Martyn’s first wife, save she was also a musician. He does have a child from a previous relationship – a daughter named Marlon. “My sweet Marlon is turning 20 tomorrow. Truly one of my angels. I love you, Marlon,” Martyn wrote in June 2017 while sharing a photo of him and his girl. In 2019, she graduated from NYU. “

“He’s been a friend for about 13 years,” Christina said about Martyn in a 2009 interview with PEOPLE. “Our relationship gets stronger and stronger. I’m really lucky. I’m very grateful to Martyn for coming along at a time that he did because he’s been my rock through all of this [her battle with breast cancer]. He gave me something to really want to live for and something to smile about.” She referred to her then-boyfriend as her “angel,” who “loves me from head to toe.”

The couple got engaged on Valentine’s Day 2010, and married in a private ceremony three years later. Between those two events, they welcomed a daughter, Sadie Grace LeNoble. Martyn continues to be a rock for his family.

Johnathon Schaech (b. Sept. 10, 1969) is an actor best known for his roles as Xavier in The Doom Generation, Jimmy in That Thing You Do!, Richard in the 2008 remake of Prom Night, and Jonah Hex in DC’s Legends of Tomorrow. As an actor, he continues to work.

Christina and Jonathon were married in October 2001. He filed for divorce in 2005. “After four years of marriage, actors Johnathon Schaech and Christina Applegate have filed for divorce. The decision is mutual. We have no further comment at this time,” their publicist at the time said in a statement, per PEOPLE. He cited irreconcilable differences. The divorce was finalized in 2007.

Johnathon spoke about his failed marriage to Christina and country singer Jana Kramer in 2020. “Jana and I had a wedding, but we were never married. It simply came down to this: She wasn’t ready to be married,” he wrote in a Reddit AMA, per PEOPLE. “[Christina is ] cancer free and is an absolute hero for others and my family. … All the Christina Applegate and Jana Kramer fans should know – I’m rooting for them too.”

He married Julie Solomon in 2013. They have two children together.

In 2018, Johnathon accused director Franco Zeffirelli of sexually assaulting him during the filming of 1993’s Sparrow. He has since worked with the Rape, Abuse & Incest National Network (RAINN) to raise awareness of sexual violence and extend support to survivors.