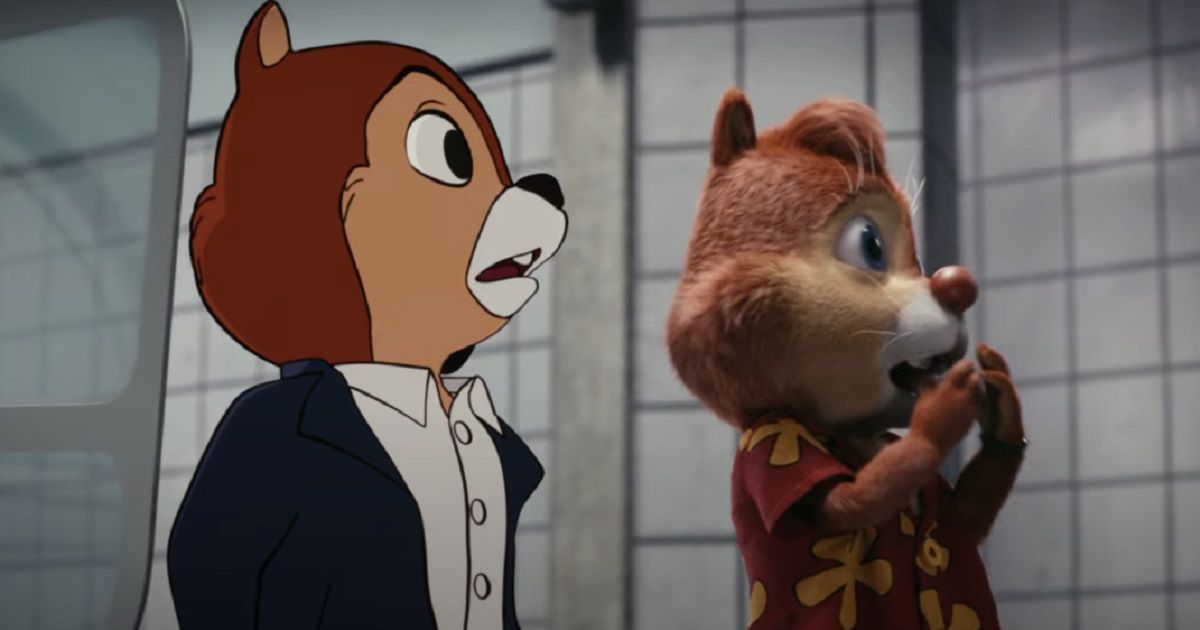 The Rescue Rangers are back in the latest trailer for their upcoming resurgence Chip ’n Dale: Rescue Rangers, an original movie from Walt Disney Studios, which will be available to stream on Disney+ from next month. Starring John Mulaney and Andy Samberg alongside an assortment of other familiar names from the realm of comedy, the movie looks far better than the usual live-action cartoon reboots usually do…

Much like previous footage, the newest trailer for Chip ‘n Dale: Rescue Rangers approaches the Disney material with its tongue firmly in its cheek. All the while paying respect to both the characters themselves and the fans that have loved them for so long. Falling somewhere between Who Framed Roger Rabbit? and The Lego Movie (with a dash of some lesser live-action cartoon reboots, though hopefully not too much), Chip ‘n Dale: Rescue Rangers takes a decidedly meta look at the life and times of its title characters, alongside the Disney world they inhabit.

In Chip ‘n Dale: Rescue Rangers, beloved Disney duo Chip and Dale are living amongst cartoons and humans in modern-day Los Angeles, but their lives are quite different these days. It has been decades since their successful television series was canceled, and Chip (voiced by John Mulaney) has succumbed to a life of suburban domesticity as an insurance salesman. Dale (voiced by Andy Sandberg), meanwhile, has had CGI surgery and works the nostalgia convention circuit, desperate to relive his glory days.

When a former castmate mysteriously disappears, Chip and Dale must repair their broken friendship and take on their Rescue Rangers detective personas once again to save their friend’s life.

Chip ‘n Dale: Rescue Rangers certainly has all the ingredients necessary to make something rather special, with a cast led by Saturday Night Live alum John Mulaney as Chip and Palm Springs and Brooklyn Nine-Nine star Andy Samberg as Dale.

The superb supporting cast includes the likes of KiKi Layne (If Beale Street Could Talk) as Ellie Whitfield, a rookie detective and avid fangirl of the Rescue Rangers; Will Arnett (Arrested Development) as an adult version of Disney’s Peter Pan, Seth Rogan (Pam and Tommy, Knocked Up) as Bob, a motion capture Viking dwarf; and Tress MacNeille (The Simpsons) as Gadget Hackwrench, an inventive mouse and member of the Rescue Rangers.

The comedy talent continues behind the camera as well as in front, with Chip ‘n Dale: Rescue Rangers directed by Akiva Schaffer of Saturday Night Live and The Lonely Island fame, working from a script written by Dan Gregor and Doug Mand (Crazy Ex-Girlfriend). The movie is produced by Todd Lieberman (Wonder) and David Hoberman (Beauty and the Beast), with Alexander Young (Extinction) and Tom Peitzman serving as executive producers.