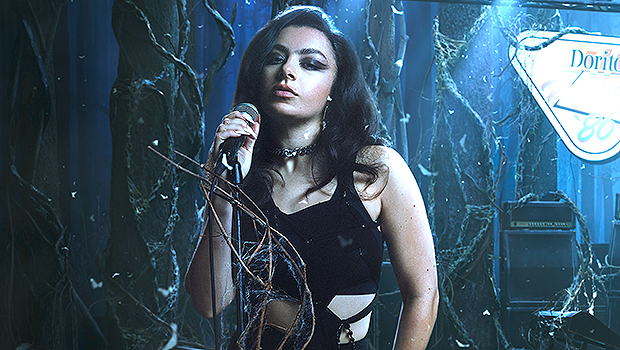 Considering the unexpected success of “Running Up That Hill (A Deal With God),” it’s a shame that Kate Bush isn’t one of the names listed for Live From The Upside Down. However, one artist who will partake in the June 23 concert – a unique music experience from Stranger Things and Doritos – is Charli XCX. “Oh, it’s so amazing,” Charli says of the “Running Up That Hill” resurrection during an EXCLUSIVE interview with HollywoodLife. “I love that song, and I love the way that it gets used as this kind of protective power in the show. I also think it’s really cool that people are rediscovering the song, or maybe even discovering it for the first time. I mean, [Kate] ‘s such an icon, and that song is so timeless and amazing.”

The lasting image from the first part of Stranger Things 4 is Max (Sadie Sink) with her eyes rolled back into her head before someone puts on a song to bring her back from the Upside Down and away from Vecna‘s clutches. The meme has been used for people to share their favorite songs (or make fun of other tracks). The question is: what would pull Charli back? Surprisingly, it’s not an ’80s classic but a ’90s one. “Oh, let me think,” Charli tells HollywoodLife. “It might be ‘Firestarter’ by The Prodigy.”

“Yeah! We walk onto that song backstage,” she adds. “So I feel like that’s a good one. And also, I know there’s some kind of beef between things in The Upside Down and fire. So maybe it’s a good one.”

At first glance at the lineup for  Live From The Upside Down, you might start humming “Back In Time” by Huey Lewis and the News. While every act on the bill is iconic, Charli seems to be the odd one out, since she’s sharing the stage with The Go-Go’s, Corey Hart, and Soft Cell. But, her inclusion makes more sense than one would think at first glance. After all, Charli is an avid fan of Doritos. “I’ve had Doritos on my tour rider forever,” she tells HL, “I was very, very excited that the whole collaboration is so inspired by 80s music, which is something that I’ve been really inspired by recently with my latest album [Crash], in particular.

Secondly, as she said, the ’80s are in Charli’s DNA. “I’ve always predominantly gravitated towards 80s music and 80s artists,” says Charli, “because there’s such a sense of escapism and freedom and joy within the music. I also feel like there’s this lack of boundary in a lot of my favorite 80s artists, in the sense that a lot of [those] artists were really otherworldly. You felt like they were true rock stars from another place.”

“I really like that in all of my favorite musicians, whether they’re from the 80s or from now,” she adds. “I like people who feel like they see the world through a different lens or are kind of transported here from another time.”

That unidentifiable intrigue about an artist helps make their music “more of an escapism,” says Charli. “And I think that’s why I’ve always been really drawn to about 80s music. But, also, I just think the songwriting is really classic and really powerful and emotive. A lot of the synths and sounds that were being used and pioneered in the 80s — they just sounded so luscious and beautiful and really warm. Musically, they have always been very inspiring to me.”

Charli may have told one of these inspirations how she felt, personally. She teased a team-up with one of the “iconic acts” taking part in Live From The Upside Down, but she was not allowed to reveal who “because it’s a surprise, and you’ll have to watch the virtual concert on June 23rd to find out.”

To watch Live From The Upside Down, pick up a bag of Doritos or Doritos 3D Crunch featuring the limited-time Stranger Things packaging. Or, visit Doritos.com/StrangerThings to reserve your ticket and pick up exclusive merch.