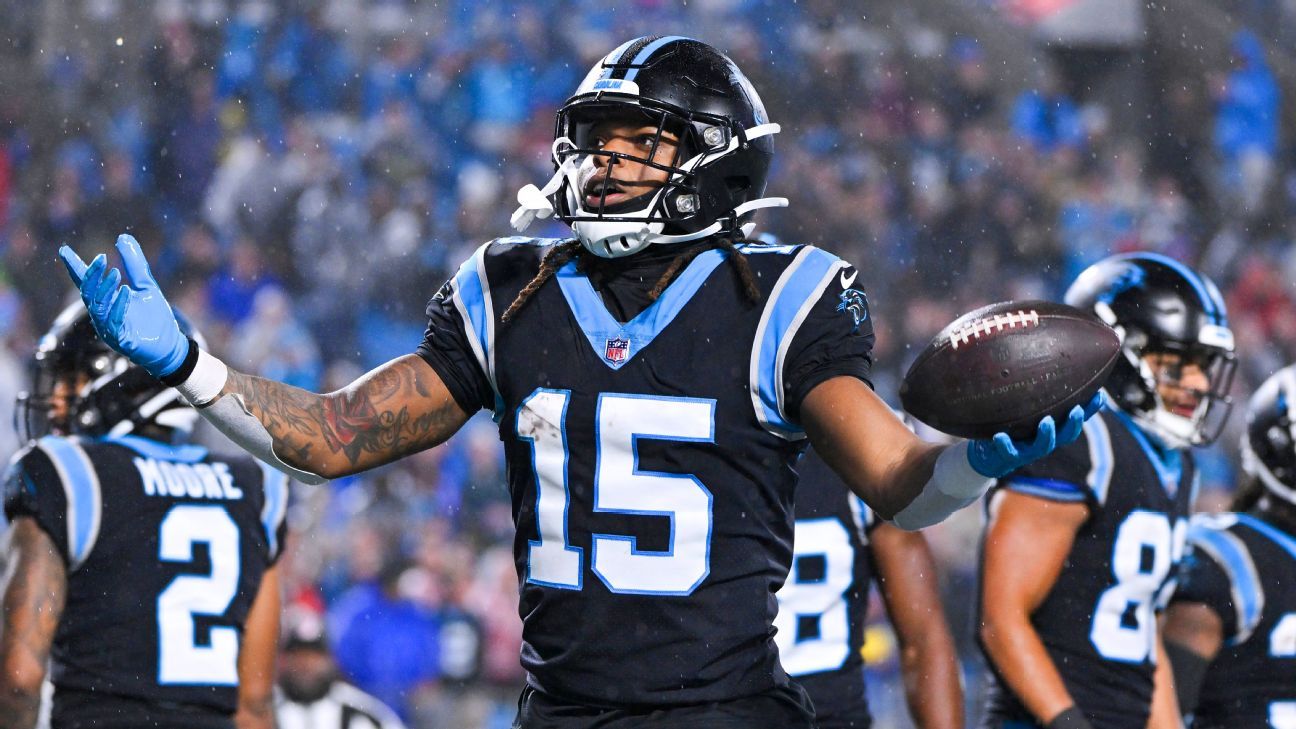 CHARLOTTE, N.C. — A steady rain fueled by Tropical Storm Nicole made for some messy conditions in Thursday night’s tilt between the Atlanta Falcons and Carolina Panthers.

The Panthers came through with a 25-15 victory, 11 days after the Falcons beat the Panthers in a wild 37-34 overtime game at Atlanta.

Don’t laugh, but the Carolina Panthers remain relevant in the NFC South. As bad as they’ve been, the division has been nearly as bad and is winnable for a team that is 3-7 after Thursday night’s victory over the Falcons. Carolina is only a game-and-a-half behind first-place Tampa Bay (4-5), a team it has already beaten. It’s only a game behind Atlanta (4-6) with a 1-1 record against the Falcons. And consider, the Panthers have the best division record (3-1) and their remaining schedule is the 27th toughest in the NFL. New Orleans’ schedule is the seventh toughest and the Bucs’ is 22nd. Again, don’t laugh. In 2014, a 3-8-1 Carolina team won its final four to win the South and then a playoff game.

Promising trend: The Panthers topped 169 yards rushing for the third time in five games since trading star running back Christian McCaffrey after a Week 6 loss to the Los Angeles Rams. They entered Thursday averaging 135.7 yards, 11th best in the NFL, since Week 7. That number is going up after the team rushed for 232 yards against Atlanta, and D’Onta Foreman is a big reason. He’s had three games with at least 118 yards rushing, topped by 130 against the Falcons. If Carolina can continue to run the ball and play good defense, it has a chance to at least be in games.

QB breakdown: PJ Walker wasn’t spectacular, but he didn’t have to be on a night when the running game was in high gear. But did he play well enough to keep the starting job next week against the Baltimore Ravens? He didn’t see tight end Stephen Sullivan wide open in the first quarter and was lucky not to have his attempted pass to DJ Moore in the end zone intercepted. He took a bad sack in the first half that took Carolina out of field goal range. He seemed hesitant to run, something the Panthers want him to do more. Looming is Sam Darnold, a quarterback the Panthers might be inclined to give another shot.

Bold prediction for next week: The Panthers start Darnold, activated from injured reserve earlier this week, against the Ravens and make Walker the backup. At worst, Darnold is the backup and Baker Mayfield is either inactive or released. The team really wants to get a look at Darnold, who was 4-7 as the starter last season. It’ll happen at some point, whether it’s next week or soon after that. He’s a player the team could consider as a veteran to help mentor whatever quarterback the team selects in the 2023 draft.

That’s the best way to describe the Falcons on Thursday evening. In prime time for the first time this season, nothing worked. Not close.

The offense was ineffective. The defense was porous. Special teams included kicker Younghoe Koo missing two extra points for the first time in his career. And while the Falcons’ loss to the Panthers doesn’t look like a blowout on the scoreboard, the Falcons very rarely looked like they had a chance in the game.

In a contest that once again could have given them first place in the division and brought them again to .500, Atlanta will instead lament another missed opportunity to try to get to first place in a poor division.

While this doesn’t put the Falcons out of anything because of the ineffectiveness of the division, it does send Atlanta back into the thick of the mess that is the NFC South. So. Ugly.

Troubling trend: The Marcus Mariota–Kyle Pitts misconnection continued Thursday. Mariota connected with Pitts on the second play of the game. Then he couldn’t find his tight end again until late in the fourth quarter. Mariota and Pitts entered the game connecting on 51% of their passes — worst among any quarterback-tight end combination with at least 20 attempts — and Thursday didn’t improve things at all after just two catches for 28 yards on eight targets.

Biggest hole in the game plan: After playing the Panthers less than two weeks ago, when Foreman rushed for three touchdowns, Atlanta had to know Carolina would be running the ball. And that did not matter. The Panthers ran for 232 yards on Thursday, completely mowing through the Atlanta defense. The Falcons even cycled through linebackers in the first half with Rashaan Evans, Mykal Walker and Troy Andersen — and it did not matter.

QB breakdown: More like broken down. This was the worst Mariota has looked all season, even if the stats aren’t as bad as in some other games. While his 19-of-30, 186-yard, 2-touchdown, 1-interception (two others were dropped) stat line is below average for him, his play was so much worse. His deep passes were not on target (a consistent issue), and for one of the first times in 2022, his decision-making seemed equally poor. He wasn’t assisted by multiple low snaps from center Drew Dalman and shaky offensive line play, but it was quite a poor performance for Mariota.

Silver lining: Cool moment for KhaDarel Hodge. In his fifth NFL season and 65th NFL game, Hodge scored his first receiving touchdown. He has played on four teams, and on career catch No. 41, he got his first score.