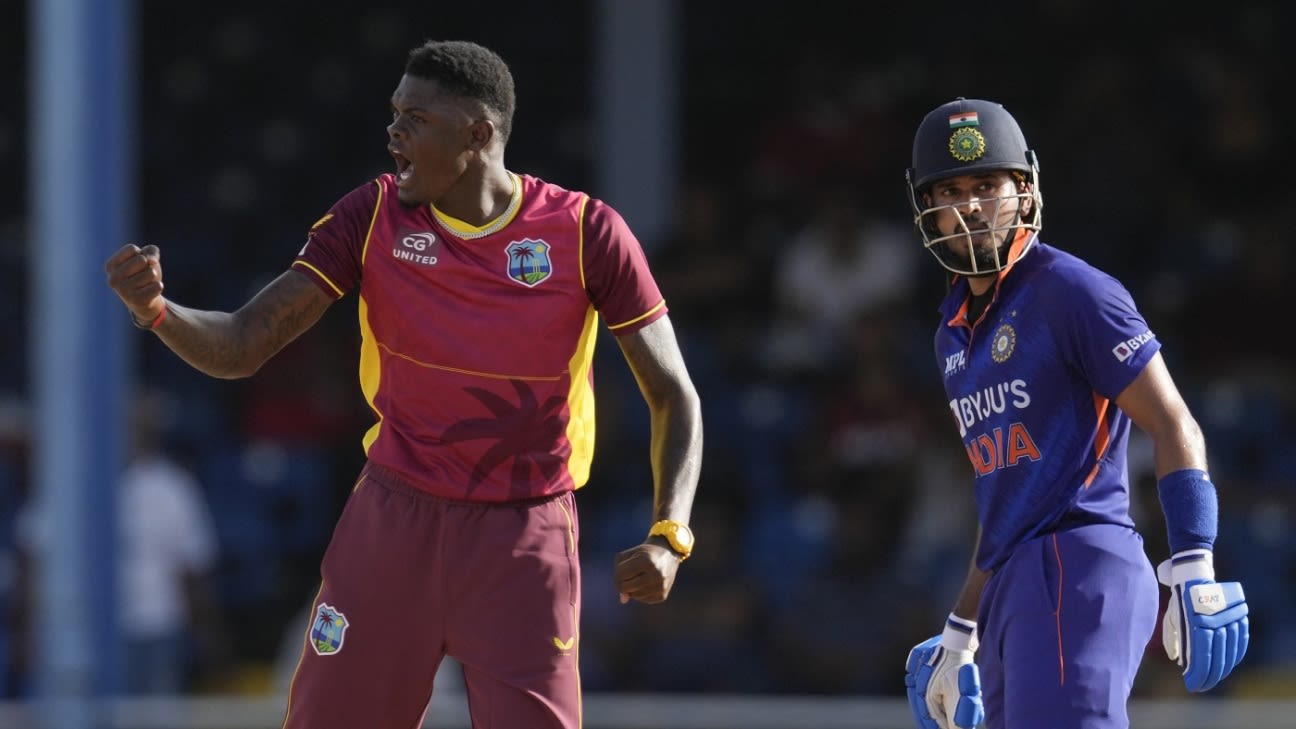 India are on the cusp of their second successive ODI series sweep against West Indies. This is a team without Rohit Sharma, Virat Kohli, KL Rahul and Jasprit Bumrah, to name just a few. Mohammed Siraj’s economical outings coupled with Shardul Thakur’s knack of picking up wickets have ensured India haven’t missed Bumrah or Bhuvneshwar Kumar.

While Siraj’s accuracy in the last over denied West Indies in the first ODI, Axar Patel’s heist in the second ensured that they pulled off a record chase at the Queen’s Park Oval to seal their third consecutive ODI series win.

It’s been smooth sailing for most part, but if there’s still an issue for India to sort out, it could be their batting through the middle overs. From overs 11 to 40 in the second ODI, India scored 170 but also lost five wickets. In the first match, they managed 175 for 4 in the same phase.

In ODIs this year, India have lost an average of 4.18 wickets per innings – 46 wickets in 11 outings – in the middle overs. Only West Indies (5.29), Australia (5.25) and Zimbabwe (5) have done worse than them, among Full-Member teams. More runs from Suryakumar Yadav and Deepak Hooda – who are yet to fire at full potential in this series – could go some way towards improving this facet of India’s game.

West Indies haven’t done all that badly either, despite results not having gone their way so far. They’ve struck regularly through the middle overs to keep India in check, and their batters have posted two successive 300-plus totals.

Perhaps one area they could look into is their death bowling, and particularly their use of Romario Shepherd in that phase. He bowled the 42nd and 47th overs of India’s chase on Sunday, and gave away 27 runs off those two overs, and the punishment he took wasn’t a one-off. Among all bowlers to have bowled at least 60 balls in the last 10 overs this year, Shepherd (10.28) has the worst economy rate. Moreover, he only has three wickets in seven innings in that phase.

With Keemo Paul and Jason Holder – who missed the first two ODIs after testing positive for Covid-19 – breathing down his neck, Shepherd may have to improve this facet of his game to keep his place in the XI.

Despite India scoring over 300 in each of the first two ODIs, Alzarri Joseph has managed an economy rate of 5.35 and has also picked up four wickets. In the absence of Holder, he has assumed a leadership role, often running in from deep third to offer suggestions to Jayden Seales during the second ODI. He was expensive with the new ball in the first ODI, conceding 29 off his first three overs, but came back well to help West Indies tie India down later on, getting both Axar and Hooda bowled in the 49th over. In the next match, he was tighter in his lines and more disciplined in his opening spell, giving away just 14 off his first three overs. Joseph will have to keep his impressive form going if West Indies are to end their run of eight successive ODI defeats.

On Sunday, Suryakumar Yadav inside-edged the ball onto his stumps for the third time in his last four ODI innings. While Reece Topley had him playing on at Lord’s earlier this month, he has chopped on to Akeal Hosein and Kyle Mayers in this series. This run of dismissals has also coincided with a bit of a lean patch in the format – he has only crossed 20 once in his last five ODI innings. Can he break this sequence on Wednesday?

It is unclear yet if Jason Holder has recovered enough to feature in the final ODI. With the series already lost, young Keacy Carty and Keemo Paul could get an outing.

India could get Prasidh Krishna back, perhaps in place of either Mohammed Siraj or Avesh Khan. Ravindra Jadeja’s knee niggle had ruled him out of the first two ODIs, as per BCCI’s release. In case he’s fit to return, Axar may have to make way despite his match-winning half-century on Sunday, unless India choose to play two left-arm spinners – and strengthen their batting – and leave out Yuzvendra Chahal, who is also not part of the squad for the T20I series. With the series already in their bag, India may also look to give the likes of Ruturaj Gaikwad, Ishan Kishan or Arshdeep Singh a go.

The pitch for the first two games were largely good for batters, with changes in pace proving effective for the seamers. With only a two-day gap between the second and the third ODIs, a fresh track could be used. Weather-wise, there are thunderstorms predicted through the day – spectators may have to brace for stoppages.

S Sudarshanan is a sub-editor at ESPNcricinfo