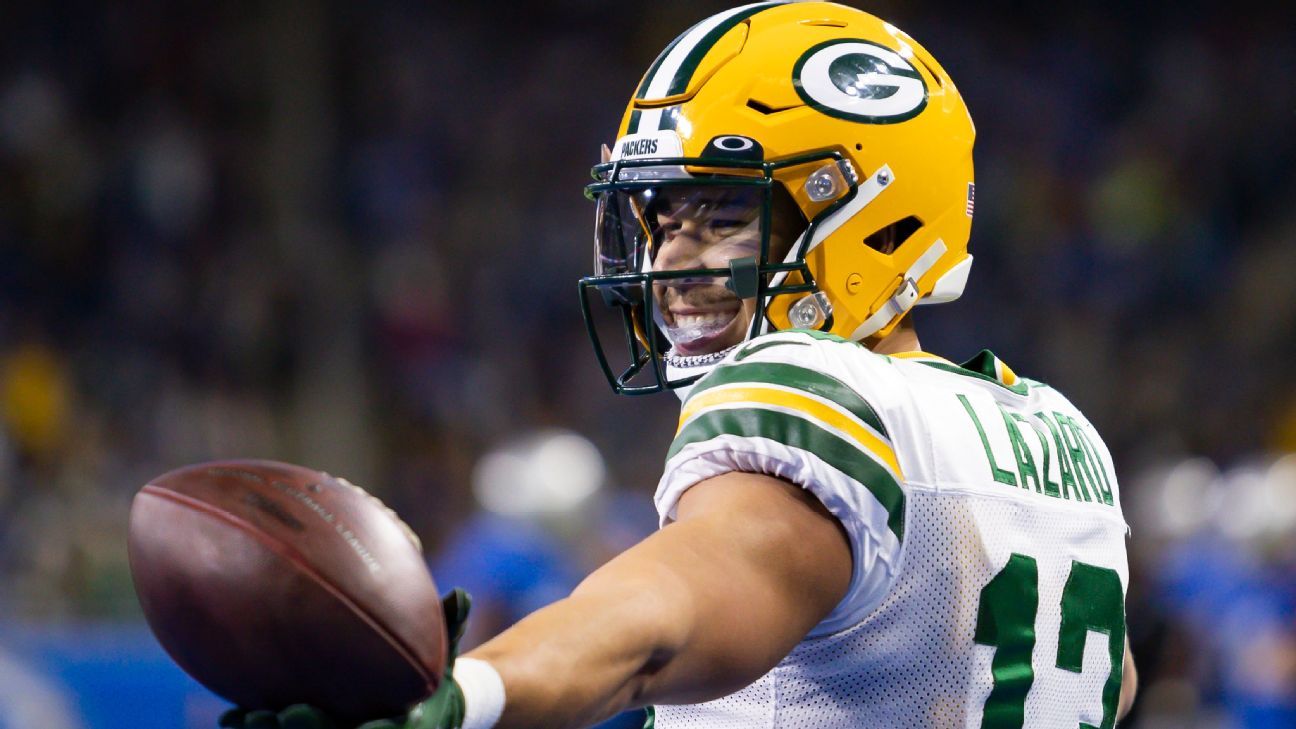 GREEN BAY, Wis. — Aaron Rodgers has been an Allen Lazard fan from the beginning.

He loves to retell the story from Lazard’s first training camp with the Green Bay Packers in 2019. It was Matt LaFleur’s first season as coach, and in order to maximize practice reps, he occasionally split the team into two groups: the starters and top backups (called the green group) at one end of the field, and the bottom-of-the-roster players (the gold group) at the other end.

When Rodgers would look toward the other end of the field, he’d see a relatively unknown receiver make play after play.

“It was every day we were watching the gold reps, and you’re saying, ‘Who’s 13?’” Rodgers said at the time. “I’m like, ‘Get him down on the green side, at least for a couple days. I need to see this guy against some 1s and 2s down here.’”

While many around the NFL might not think the Packers have a true WR1 after they traded All-Pro Davante Adams to the Las Vegas Raiders in March, it should come as no surprise that Rodgers doesn’t share that viewpoint.

“I really think Allen is ready to make a jump and be a No. 1 receiver,” Rodgers said as training camp opened last week. “And I’m excited about the opportunity to work with him.”

Rodgers has never entered a season without an established top receiver before this. He has always had someone like Donald Driver, Greg Jennings, Jordy Nelson, James Jones, Randall Cobb or Adams — someone he described as “that guy.”

“When you walk in the locker room for so many years and you see 87’s locker over there, Jordy Nelson, you see Davante Adams, it gives you a different feel,” Rodgers said. “You just know you’ve got that guy.”

The 6-foot-5, 227-pound Lazard has never had WR1-type numbers. His 40-catch, 513-yard, eight-touchdown season in 15 games last year was a career best. But those who have been around Lazard since he arrived in Green Bay late in the 2018 season, when the Packers signed him off Jacksonville’s practice squad, have seen a steady progression from a player willing to do whatever it takes to one ready to break out.

He has drawn nearly as much praise for what he does in the run game than as a pass-catcher. Last summer, LaFleur said that he calls Lazard the offense’s “goon,” a reference to a hockey player willing to get physical. In Lazard’s case, it was because he was more than willing to throw a block downfield to spring a long gain.

“He can be everything for us,” Packers running back Aaron Jones said. “He’s already the goon in the run game, and then I think he’s shown when he gets the opportunity, he could be a dominant receiver. He can go up and get it, he can run across the middle and get it, he can go deep and get it.

“I’m happy that he’s getting the opportunity to be a No. 1 because he’s earned it. He’s put his body on the line the last two, three years for us, running down [and] blocking.”

Is this heaven? No, it’s Iowa

IN ORDER TO prepare for this season, Lazard took a different approach. He stayed away from Green Bay in the offseason; he didn’t sign his restricted free agent contract (one year, $3.986 million) until after the mandatory minicamp, so technically he wasn’t in violation of the rules.

Instead, he stayed home in Iowa — his very own field of dreams.

To hear him tell it, his mom “guilted” him into it, saying she never gets to spend time with him.

But he had another reason.

“That’s where my roots are,” Lazard said. “Being this fourth-, fifth-year season and everything, obviously I wanted a new contract and extension. I’m going into free agency next year. Let me go back to where everything started. That’s really where I found myself as a man, a kid and my identity as a player and as a person as well.”

Because Rodgers also skipped most of the offseason program, it wasn’t like Lazard was missing valuable time with his quarterback. They made up for lost time almost immediately in training camp, with Lazard as Rodgers’ first option early and often.

But Watson (knee) and Watkins (hamstring) started training camp with injuries. And the more camp Watson misses — and it looks like he will miss a decent chunk while recovering from June knee surgery — the less likely he can push for the No. 1 spot right away. In fact, Doubs might be Lazard’s biggest challenger after his hot start to camp.

“I’m excited to see what he can be for us in a different role,” Gutekunst said of Lazard at the start of camp. “Allen’s a confident guy. Every time we’ve given him opportunities, he’s produced. So with these new opportunities, I’m excited to see him grow and develop. But I think sky’s the limit for him. I think he can be a really good player in this league. He has been a really good player for us, and I think he’s excited for the opportunity, as well.”

DON’T EXPECT LAZARD to suddenly get all 169 targets that went to Adams last season. But he believes he’s worthy of his fair share.

Take your shot at picking win totals for all 32 teams for a chance to win up to $10,000!
Make Your Picks

“Obviously, when Davante was here, his talent is extreme,” Lazard said. “It’s tremendous, undoubtedly, he’s the best wide receiver in the league right now and probably will be for a while. That doesn’t mean I’m far behind him from that standpoint. I learned a lot from him. He’s taught me a lot, not only on the field but also off the field and how to carry yourself as a professional and as a man as well. I’m thankful for my time with him, but things move on and it’s a different age now.”

It’s a critical year for Lazard from a financial aspect as well. He will be an unrestricted free agent next offseason and a big year could mean big bucks.

But he’s not big-timing anyone.

Lazard has regularly stayed on the field after the main portion of practice has concluded to stick around for the developmental period. That’s when rookies and other young players stick around for extra work.

“Obviously, Allen wasn’t here with us during the OTAs, but the moment he got here, he’s been helping,” Watson said. “He was out there during the developmental period when it was just the young guys, coaching the guys up and letting guys know what they should be doing.”

The rebuilding of Anthony Joshua

WNBA playoffs 2022 – Best outfits from the first round