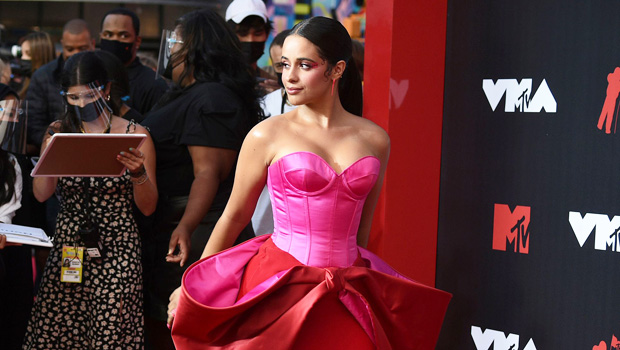 Camila Cabello looks to be all in for her role as judge on the upcoming season of The Voice — which includes tolerating the shenanigans from fellow judge Blake Shelton! The “Bam Bam” singer showed off her sense of humor in the latest ad for the NBC singing competition, which comes as a horror movie parody with Blake as the culprit. Blake’s wife Gwen Stefani and returning judge John Legend get in on the all the scary fun as well!

In the video, Camila receives a threatening letter warning her of losing at the job as judge, as Gwen wonders aloud about the author of such messages. After John announces he has also been the recipient of a mystery note, made with cut outs from magazines, Blake repeatedly insists the sender is “anonymous”. The show’s host Carson Daly eventually reveals Blake is behind the prank, with Camila rolling her eyes and saying, “Busted.” Watch the cute clip above!

While being a host on the uber popular series will surely shine a bigger spotlight on Camila, the former Fifth Harmony member recently revealed she is not interested in the fame that follows a pop star, much like her pal and “Bam Bam” collaborator Ed Sheeran. “I want to be an artist, not like a ‘celebrity’,” she told Cosmopolitan. “[Ed] just strives to be an artist, and then also just lives his life as a normal dude. I think Ed just lives it – he’s just out here trying to have fun with good people and make music he loves. And that’s the same thing I’m trying to do.”

She also dished about her love life, saying she’s in no rush to start a new relationship since breaking up with her ex Shawn Mendes in November of 2021. “If something happens, then that’s really fun, but I don’t put any pressure on it.” she admitted to the outlet. “Before I used to be like: ‘Yes, love, oh my god, love,’ and now I’m just trying to have a good time. I just want to live my life and have great friendships. If something comes out of [them] that’s something more, then that’s great.”

When Camila and Shawn first announced their decision to go their separate ways on November 17, they released a joint statement, noting they would “continue to be best friends.” “We’ve decided to end our romantic relationship but our love for one another as humans is stronger than ever,” the couple said.