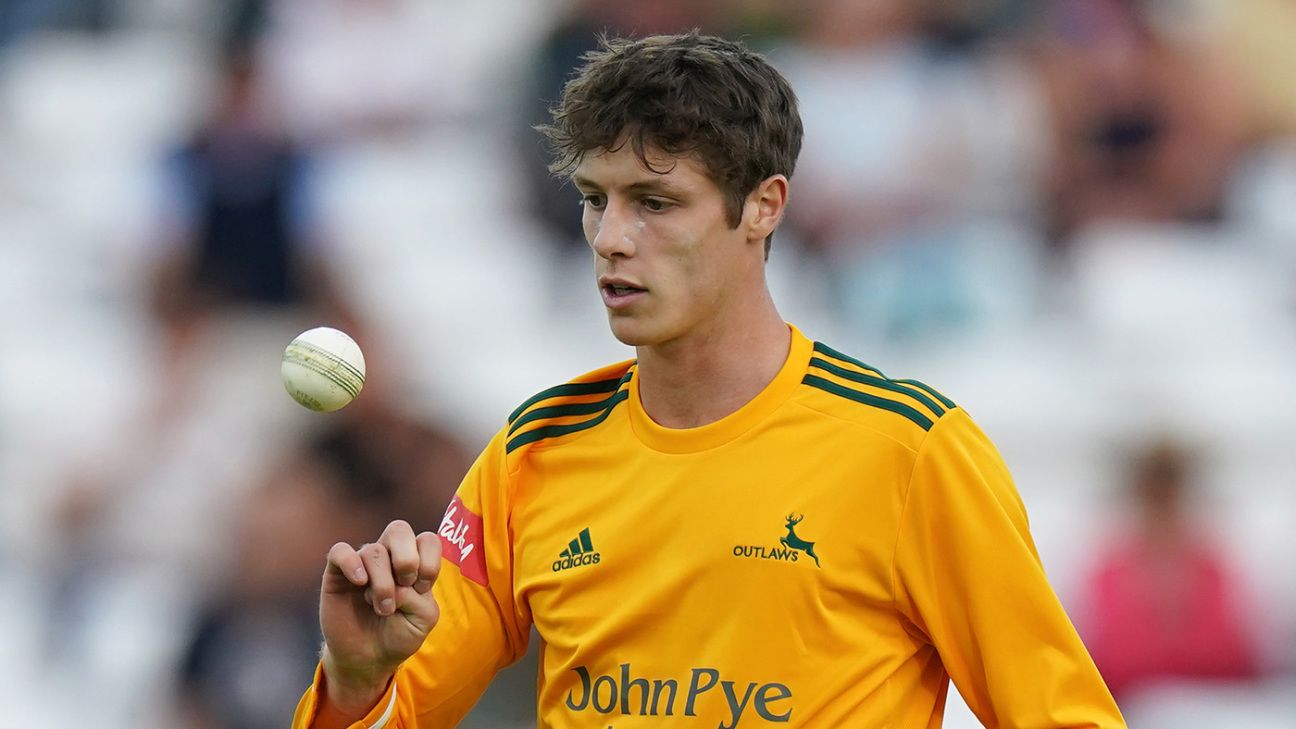 Notts Outlaws celebrated an impressive Vitality Blast group campaign with a crushing 78-run victory over Durham although the game was marred by a nasty injury to Brydon Carse. The pace bowler was hit in the face by an Alex Hales drive when he slipped in his follow-through in the 4th over and played no further part in the match.

Ben Duckett, with an unbeaten 74 from 41 balls, and 43 not out off 17 balls by Steven Mullaney propelled the Outlaws to 221 for 4 which was far too much for Durham. They collapsed to 59 for 6 and were bowled out for 143 in 16 overs with Calvin Harrison taking 4 for 36 as the North Group winners claimed a ninth victory.

Joe Clarke, awarded his Nottinghamshire cap before the game, and Hales gave the Outlaws early momentum before both fell in Paul van Meekeren’s second over. Clarke skied to point and Hales, missed on 14, failed to clear mid-on as the Outlaws ended the Powerplay on 70 for 2.

Although Tom Moores was lbw first ball to Scott Borthwick, Duckett and Samit Patel got the Outlaws back on track by adding 67 in 7 overs. Duckett swept Liam Trevaskis for two fours and a six and made Durham pay for dropping him on 28 when Alex Lees spilled a chance at deep midwicket.

Matty Potts held a much harder catch running in from long on to remove Patel for 34 off 26 balls but that only opened the way for Mullaney’s brutal late onslaught. He pulled Graham Clark’s legspin for three sixes in the 15th over which cost 24 and he and Duckett plundered 83 from 37 balls to take the Outlaws to an imposing total.

Any chance Durham had of chasing it down vanished when they lost four wickets in the Powerplay with Clark and Alex Lees both failing to score. David Bedingham struck some defiant blows before he skied Dane Paterson and after Cameron Bancroft was yorked by Zak Chappell, Harrison removed Ben Raine and Borthwick in the 9th over.

Potts at least went down swinging, heaving Patel for three sixes in the 13th over, but Harrison wrapped up a comprehensive win with four overs to spare.