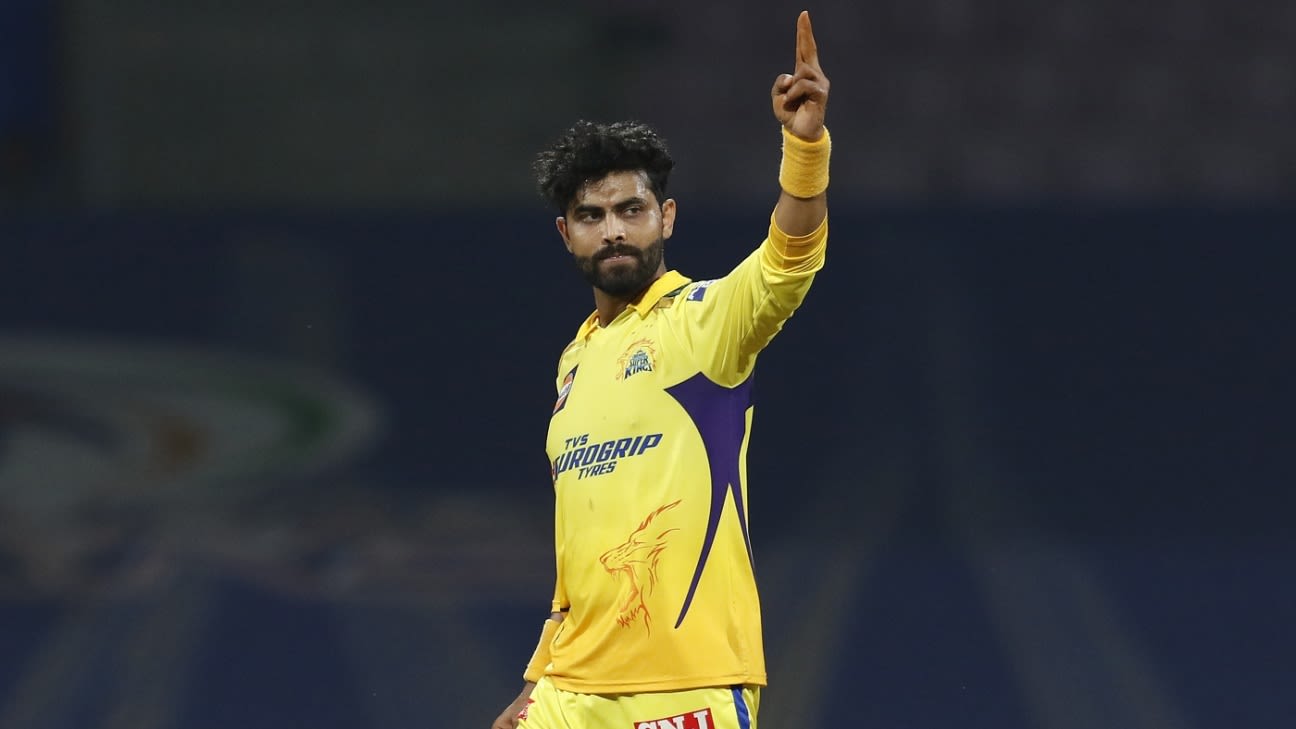 Ravindra Jadeja‘s IPL has come to an abrupt end because of a rib injury. Jadeja picked up the injury while attempting a catch after running in from the deep against Royal Challengers Bangalore on May 4. While he continued playing that game, Jadeja sat out Chennai Super Kings’ last match, against Delhi Capitals.

Kasi Viswanathan, Super Kings’ chief executive officer, confirmed to ESPNcricinfo that both franchise and Jadeja agreed it was best for him to recover outside of the IPL. “He has a bruised rib,” Viswanathan said. “The medical advice is he should not strain it, so we have decided that he should leave the IPL.”

Super Kings are currently ninth on the points table with eight points from 11 games. To qualify for the playoffs, they need to win all their remaining games and hope other results go their way.

Incidentally, the Capitals game was only the second time Jadeja had missed a match for Super Kings since the franchise bought him in 2012. The only other instance was in the 2019 season, when he missed a match against Mumbai Indians because of illness, a game that even MS Dhoni missed in another rare occurrence.
Among the fittest players in cricket, Jadeja is going through one of the most challenging phases of his career. He was handed the captaincy two days before IPL 2022 began. At that time, Jadeja said he had “big boots” to fill, but he was confident as Dhoni was still around and would continue to be his “go-to man”. However, eight matches into Super Kings’ season, he stepped down, saying he wanted to focus more on his game. Super Kings had won two of those eight matches under Jadeja, before Dhoni took the reins back.
Jadeja, 33, had never led a senior team full-time prior to being handed the Super Kings gig; his only prior experience as captain in top-level cricket was a tournament for India Under-19s in 2007. But Dhoni and Super Kings’ team management, as well as owner N Srinivasan, felt Jadeja’s immense experience along with his rich pedigree as a match-winner made him the best choice to succeed Dhoni. A couple of weeks before the IPL bagan, Jadeja had summited the ICC’s Test-allrounder rankings, and over the previous two IPLs, he had taken over the finisher’s mantle from Dhoni, scoring 459 runs at an average of 57.37 with a strike rate of 157.73.
That form fell away with the added demands of captaincy: so far this season, he has 116 runs in ten innings, including two ducks, at an average of 19.33 and a strike rate of 118.36. With the ball, he has five wickets from 33 overs at an average of nearly 50. Also Jadeja, one of the best fielders in cricket, has dropped four catches.

After his first match back as captain, against Sunrisers Hyderabad on May 1, Dhoni had said that he looked to help Jadeja with his captaincy in the first two games this season as part of a “gradual transition” plan. “At the end of the fifth-sixth-seventh [game] or the full season you don’t want him to feel as if the captaincy was done by somebody else,” Dhoni told host broadcaster Star Sports. “So it was a gradual transition where I said, ‘Okay, this is what I will do. I will take care of the fielding angles and everything for the first game, second game. After that, you will have to decide on your own because that’s the only way you will learn what captaincy is.’ Spoon-feeding doesn’t really help the captain. On the field, you have to take those crucial decisions and you have to take responsibility for those decisions.”

Asked whether Jadeja agreed with his reasoning, Dhoni said he tried to help him out as Super Kings wanted the allounder at his best across all three skillsets even while taking on the many other duties that come with captaining. “What is important is once you become the captain, you have to take care of many things. And that also includes taking care of your own game. And with him, his mind was working a lot.

“It’s not easy to control your mind, it’s the strongest feature… body, physiques, all of those things are fine, but once your mind starts working and it wants to contribute more: okay, what’s the combination I can play with; okay, who can bowl at what point of time. It doesn’t really stop. So, what really happens is the individual is not able to relax – even when he closes his eyes and wants to sleep, the mind is still working.

“So what I felt was, it was having an effect on his game also. When he was going in to bat, or when it comes to his preparation, is putting this [extra] burden affecting his game? Because I would love to have Jadeja as a bowler and batter and fielder. Captaincy, fair enough. Even if you relieve [him of] captaincy, and if he is at his best [as a player], that’s what we really want because we were also losing a great fielder. We were struggling [to find] a deep-midwicket fielder.”