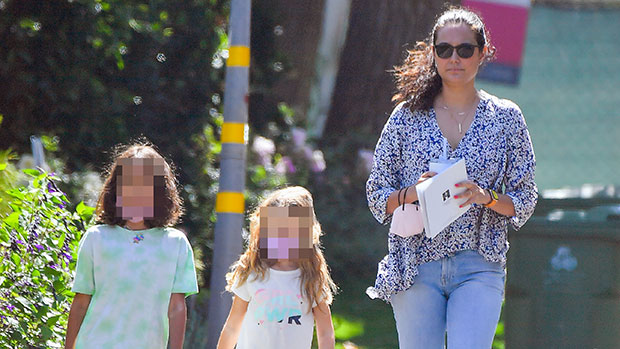 Emma Heming is having some fun in the sun with her daughters! The 44-year-old British model and actress shared a compilation video of a vacation spent in what looks like tropical waters with her and Bruce Willis‘ girls, 10-year-old Mabel and 8-year-old Evelyn. “We’re in a sunshine state of mind,” Emma captioned the post. The video, which was set to Harry Styles‘ hit song “As It Was”, began with a short clip of Mabel riding a motorboat to her and her family’s picturesque getaway spot. The montage then sowed various clips of Emma and her daughters splashing around in shallow waters and a pool.

At one point Emma got down on her knees and posed with both Mabel and Evelyn. The Red 2 actress rocked a black one-piece and accessorized with black sunglasses and a gold necklace. Evelyn glanced away from the camera in a blue one-piece with a rainbow pattern printed on it. Meanwhile, Mabel looked adorable in a tie-dye, one-shoulder bikini that featured ruffles across both the top and bottoms. She cheekily stuck her tongue out at the camera.

Another portion of the video showed Emma and Evelyn sipping out of coconuts while sitting on a gorgeous beach. Evelyn wore the same tie-dye bikini and a matching tie-dye bucket hat. Emma donned a crochet-covered green one-piece and a tan bucket hat. Other footage in the video showed the cute kids hopping out of a pool, riding on another boat, and Emma splashing around in the shallow waters in a multi-colored one-piece swimsuit.

Celebs On The Beach In Swimsuits: Photos

It certainly seems to be a fun summer for Emma, Mabel, and Evelyn, and the season technically hasn’t even begun! In May, Emma shared a video of Evelyn in Disneyland attempting to get a hug from Star Wars‘ Chewbacca. After a failed attempt, she shared a clip of her finally getting to hug the furry character a few hours later. Emma brought both of her daughters to The Happiest Place on Earth on May 7 to celebrate Evelyn’s 8th birthday. “14 hours… 27,000-ish steps … 14-ish miles of PURE birthday fun! But who’s counting,” Emma wrote alongside her post.

Bruce, 67, was not seen on any of the joy-filled trips. The actor announced in March that he would be stepping away from his acting career due to worsening symptoms from aphasia, a disorder that affects speech and cognitive functions. “To Bruce’s amazing supporters, as a family we wanted to share that our beloved Bruce has been experiencing some health issues and has recently been diagnosed with aphasia, which is impacting his cognitive abilities,” Bruce’s family members wrote in a joint statement across their social media pages on March 30. “As a result of this and with much consideration, Bruce is stepping away from the career that has meant so much to him. This is a really challenging time for our family and we are so appreciative of your continued love, compassion and support. We are moving through this as a strong family unit, and wanted to bring his fans in because we know how much he means to you, as you do to him. As Bruce always says, ‘Live it up,’ and together we plan to do just that.”

Herschel Walker’s Son & His 3 Other Secret Kids: Everything To Know

On March 31, Emma shared another message with Bruce’s fans. “Your love, support, compassion, prayers really help,” she wrote on her Instagram Story. “I’m grateful. Thank you from the bottom of my heart.”