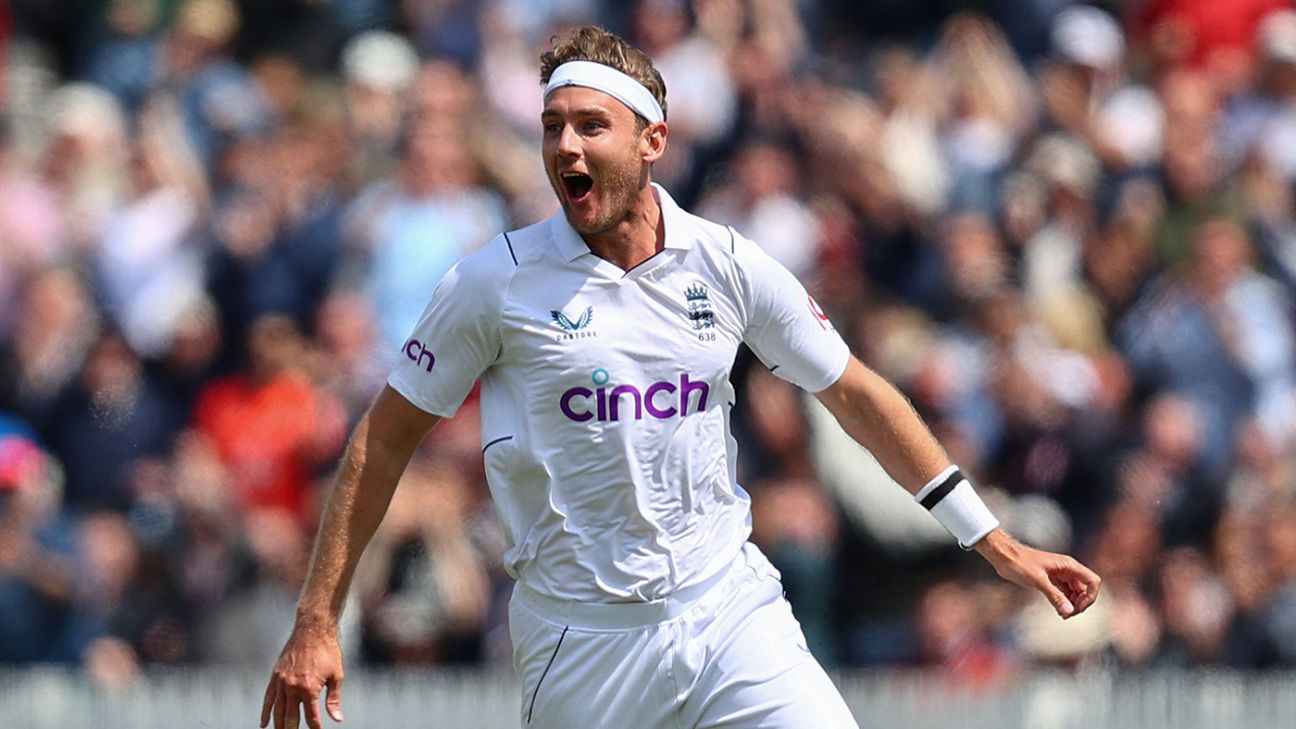 England need 277 runs to win the opening Test of their summer against New Zealand after a scintillating Stuart Broad spell with the second new ball helped bowl out the visiting side on the third morning at Lord’s.
Daryl Mitchell scored a century to bump up the New Zealand lead marginally, while Tom Blundell fell four runs shy of his own century, as England’s blend of experience and youth joined forces to pluck out six wickets inside the first hour-and-a-half of play.

Despite the dreary prelude of a half-hour delay to the start because of rain and general gloom, the match resumed its highly entertaining narrative as soon as the cloud cover gave way to bright skies. Mitchell and Blundell both resumed in the 90s, with their side 236 for 4, and Mitchell brought up his century off the first ball he faced, running three after driving Broad crisply through the covers.

Just over a quarter of an hour passed before Broad’s spell tore the lid off the morning session, starting with the wicket of Mitchell, drawn into offering a thick outside edge to Ben Foakes by a length ball outside off to perish for 108, ending his partnership with Blundell at 195 in the fifth over of the day.
Next ball, Broad unleashed a huge appeal for lbw against Colin de Grandhomme, which was turned down. But, in an enthralling subtext, Ollie Pope fired the ball at the stumps from fourth slip as de Grandhomme – who had wandered down the pitch – was sluggish getting back with his back to the action and seemingly oblivious to the urgency required.
Broad waved his arms furiously in a successful attempt to rev up the Lord’s crowd, which went wild when he ripped out Kyle Jamieson‘s off stump to make it three New Zealand wickets to fall in as many balls and, all of a sudden, the tourists had gone from 251 for 4 to 251 for 7.
Blundell remained stranded in the 90s for what seemed like an eternity as the wickets tumbled around him, and James Anderson sealed his fate with a nip-backer that struck the front pad in line with middle and leg. A hopeful review by Blundell only prolonged his agony and he was left to trudge off on 96.
Potts struck with his second ball of the day, Ajaz Patel failing to overturn his lbw dismissal, and Parkinson claimed his maiden Test wicket when he looped the ball up outside off stump and Southee sent a catch to Joe Root at slip.