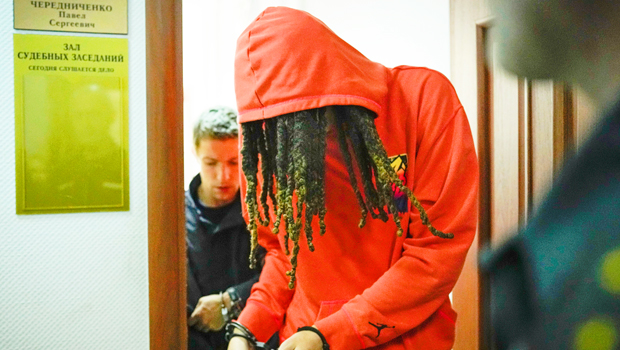 WNBA star Brittney Griner appeared in a Russian courtroom on Friday, May 13, as state officials extended the athlete’s detention for another month. Brittney, 31, was pictured in handcuffs wearing an orange hoodie with her hood over her head inside a courtroom near Moscow. It was there that Brittney learned she’d remain imprisoned in the country until at least June. Her lawyer, Alexander Boikov, told The Associated Press that the short extension of Brittney’s detention means her trial should start soon.

Brittney is currently facing up to ten years in prison over drug charges due to allegedly having marijuana vape cartridges containing hash oil in her possession at the Sheremetyevo airport near Moscow in February, which resulted in her arrest. Brittney did not express “any complaints about the detention conditions” at her May 13 court date, according to her lawyer.

The two-time Olympic gold medalist’s situation has been national news, especially because it’s happening amidst Russia’s invasion of Ukraine. President Joe Biden and his administration have openly said that Brittney is being wrongfully detained. U.S. officials and the WNBA have reportedly been working to free her, but so far they’ve had no luck.

In a statement previously given to HollywoodLife, the WNBA said, “Brittney Griner has the WNBA’s full support and our main priority is her swift and safe return to the United States.” Her team, the Phoenix Mercury, also released a statement, saying, “We are aware of and are closely monitoring the situation with Brittney Griner in Russia. We remain in constant contact with her family, her representation, the W.N.B.A. and N.B.A. We love and support Brittney and at this time our main concern is her safety, physical and mental health, and her safe return home.”