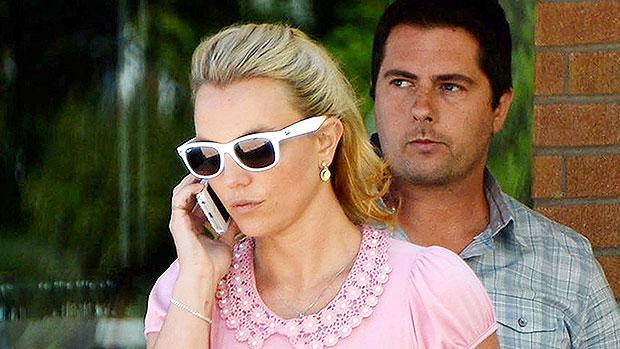 Britney Spears, 40, looked incredible during a workout session on Aug. 6! The singer rocked a pink crop top and blue short shorts as she lifted weights and took a drink from a bottle of water, in a new Instagram video that was set to her hot song “Boys.” She also shook her hips from side to side as she flaunted her toned abs, in some clips in the middle of the video, and at one point, she shared a cuddle and kiss with husband Sam Asghari, 28.

The beauty added white sneakers to her look and had her blonde hair up in a messy bun as she broke a sweat. She revealed she lost weight, in the caption for the post. “Ok so yeah … I’m showing my body !! I’m sweating like crazy !!! I’m proud I lost 5 pounds 😊,” the caption read.

Her fans were quick to respond to the video in the comments section and they encouraged the fit star to keep doing what she’s doing. “I love when you put your songs in your videos,” one fan wrote while another wrote that she was “glowing” and looking “strong.” A third called her “so cute” and a fourth revealed she motivated them to “hit the gym.”

Before Britney wowed with her latest video, she made headlines for diving off a boat and wearing a purple bikini, in a throwback post from a sailing vacation. “reflecting back. Cute right ??? My first time sailing ⛵️🐠 !!! It was actually one of the best experiences of my life … and for 2 hours 🌹🌹🌹😉!!!” she wrote in the caption of the post. Some of the pics showed her holding up a delicious-looking plate of fruit while other showed her posing with a smile on the boat before jumping into the water.

When Britney’s not looking for moments to enjoy solo or with Sam, she’s doing so with her sons, Sean Preston, 16, and Jayden James, 15, who she shares with ex Kevin Federline. A source recently told us how the teens have been adjusting to their mom’s new marriage with Sam and it turns out their relationship with her is “stronger than ever,” especially since she moved closer to them.

“Now that she lives in the same neighborhood as her sons in Calabasas, they are over her house quite often,” the source EXCLUSIVELY told HollywoodLife. “They dig their mom’s pool and they like having her so accessible. It means a lot to her, and this was one of the main reasons that she chose this place. The boys know that her house is their house, and they each have their own bedroom’s there so that they have their own space and feel at home. Britney wanted them to look at her house the same way that they look at their dad’s place.”