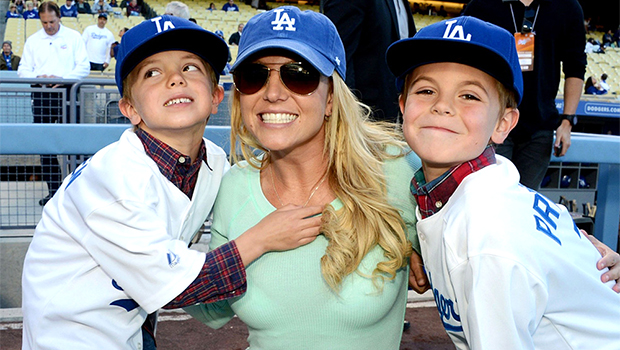 Britney Spears’ sons with ex Kevin Federline towered over their pop star mama in sweet new photos as they checked out an interactive art exhibition in Los Angeles!

Britney Spears, 39, posted a rare new photo with her kids Sean Preston Federline, 16, and Jayden James Federline, 15. The blonde was all-smiles as she put her arms around her teenage sons at the Van Gogh art exhibition in Los Angeles, who both towered over her. “Me and my boys last night,” the Crossroads actress captioned a trio if images, including three lip kiss emojis. Britney looked flawless in a brown polka dot crop top and black pants, keeping her hair up in a half ponytail.

In a follow up post, she gave her 35 million followers a glimpse at the experience, which has been blowing up on Instagram. “My children and I went to to the amazing @vangoghla… it was so freaking cool … I obviously don’t get out much so I was pretty excited !!!” she wrote alongside the video, which clocked in at over two minutes. “I went with the people who would love me anyways no matter how silly I acted when I opened my mouth!! The end of the video is me and a friend playing and dancing to the music… don’t worry it was VIP so nobody else was there … we got to really play !!! Thank you  #VanGoghLA for my backpack and the cool cupcakes !!!” she added.

The Louisiana native’s fiancé Sam Asghari, 27, added a sweet comment to the photo. “I love you! And the boys,” the trainer and model added, including a heart emoji.

The popular immersive exhibit has been making the rounds to different cities, landing in Los Angeles in late September. The late Vincent Van Gogh‘s iconic works are projected across 300,000 cubic feet of screens, bringing his paintings from the 1800s to life.

Brit rarely shares photos of her two boys, who she shares with ex-husband Kevin Federline, 43. In a recent Instagram post, the “Toxic” singer shared a sweet throwback of the kids as babies and expressed her heartbreak over them getting older. “So bittersweet to see them get older … why can’t they just stay babies forever???” she pondered in her caption. “They will always be MINE,” she declared.

Her latest outing comes just days ahead of her Nov. 12 court date where the future of her conservatorship will be decided for good. Her father Jamie Spears formally stepped down as conservator of her estate in late August, and has since been replaced with certified public accountant John Zabel, while Jodi Montgomery remains conservator of her person. Britney has legally requested to end the legal arrangement altogether, which will be decided in just days.