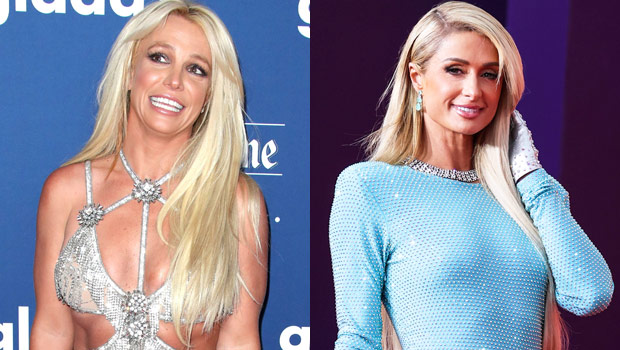 Britney Spears, 41, and Paris Hilton, 41, reunited for Hollywood agent Cade Hudson‘s big 35th birthday bash in California this past weekend. The Crossroads actress and the “Stars Are Blind” singer posed with Cade for a photo that Paris shared to Instagram. Britney and Cade both stuck their tongues out while Paris smiled wearing a pair of black sunglasses. Cade’s party took place at The Park Santa Monica and the guest list included other huge stars like Robert Pattinson, Emma Roberts, Demi Lovato, and Tiffany Haddish, according to TMZ, who also reported that Britney and Paris “were together all night.”

Paris included another photo of Britney in her birthday tribute to Cade on Instagram. In the snapshot, Britney was in between Paris and Cade as all three smiled for the camera. But fans who are still concerned for Britney’s well-being accused Paris of photoshopping the “Toxic” singer into the photo. Paris addressed this “ridiculous conspiracy theory” in a comment on her post.

“To all of those asking. Some of these photos were taken on an iPhone so they ended up being blurry,” Paris wrote. “So they used this app called Remini to make it look unblurry and sometimes the Ai distorts images. Didn’t want to even dignify this with a response. But some of these conspiracy theories are absolutely ridiculous🤦🏼‍♀️,” she added.

Paris and Britney obviously go way back and they’ve stayed close friends over the years. Paris notably attended Britney’s intimate wedding to Sam Asghari in June 2022. Paris later gushed about the wedding in an interview with E! News, saying, “It was a magical fairytale. I’m so happy for her. She’s like an angel. And it was just an iconic night with so many incredible powerful women and we had the most epic night ever.”

The socialite also revealed on her podcast that she turned down a DJ gig for President Joe Biden to be at Britney’s wedding. “I’m not going to go into any details because it was the princess bride’s night and that’s her story to tell, but all I can say is that I’m so incredibly happy for her,” Paris said about Britney. “She looked stunning and it just made me so happy to see that she found her fairytale,” she added.