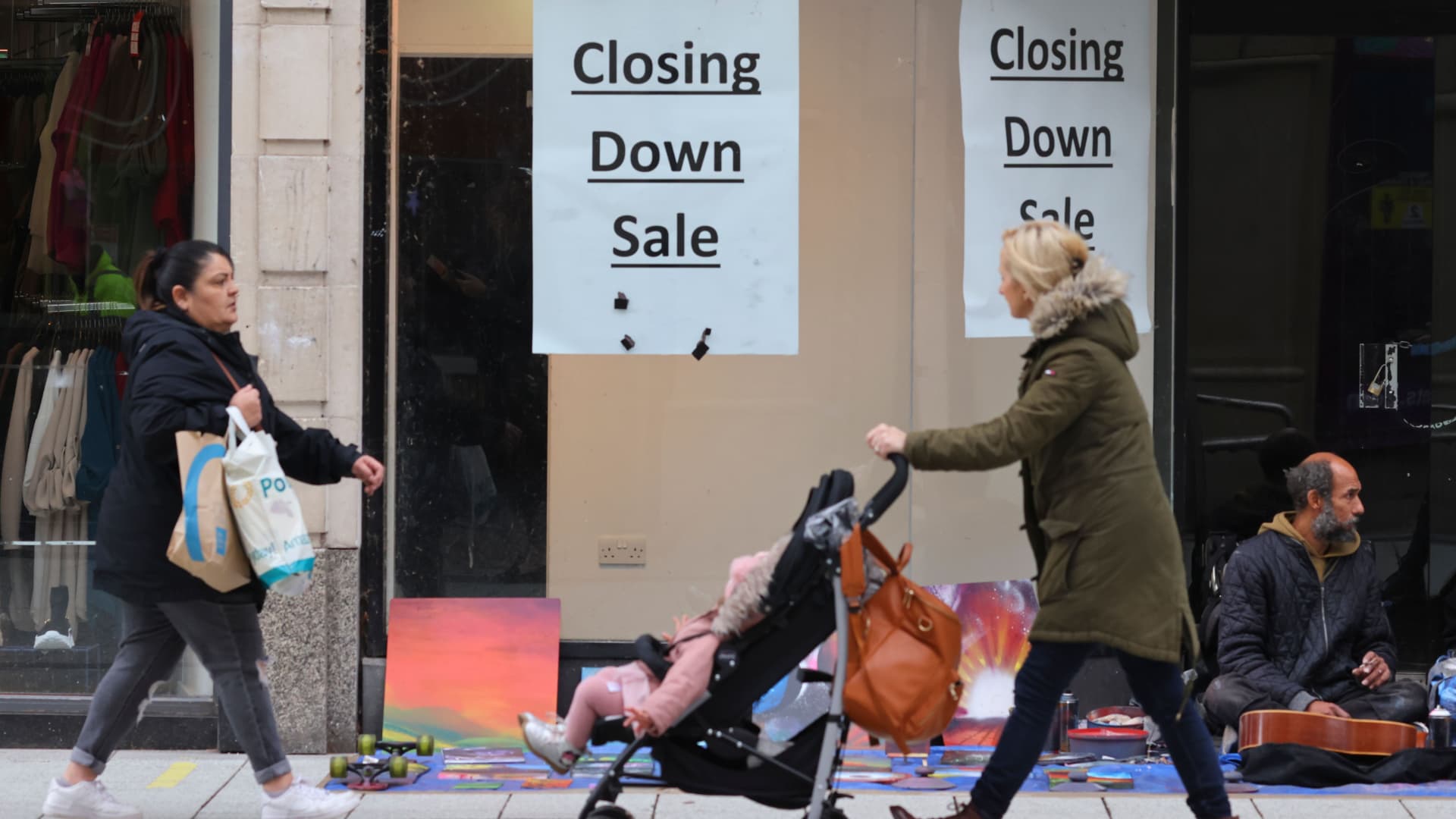 U.K. businesses are bracing for a difficult winter amid soaring inflation and higher energy bills.

LONDON — The doors to The 25, a Torquay-based boutique bed and breakfast on the U.K.’s southwest coast, are now closed for the winter period. But this season, they will remain shut for longer than usual.

With rising energy bills and higher costs piling pressure on U.K. businesses, owner Andy Banner-Price has deferred reopening by a month until well into the spring.

And while forward bookings from regular guests remain strong, new enquiries are down 50% and bookings 15% lower than previous years, painting an uncertain outlook for the year ahead.

“I suspect many people are having a wait and see approach as there is so much uncertainty in the economy at present,” Banner-Price told CNBC.

The U.K.’s latest economic data brought some clarity to the picture Friday — albeit to the downside.

Many (businesses) are aiming to get the Christmas rush over, and then close the doors in January.

chair of policy and advocacy, Federation of Small Businesses

U.K. gross domestic product (GDP) shrank by 0.2% quarter on quarter in the three months to September, official figures showed, down from a growth rate of 0.2% in Q2 2022. A second consecutive quarter of negative growth going forward would indicate that the U.K. has entered a technical recession.

“It’s a cumulative effect of bad news every time you turn the TV on or open a newspaper,” he said.

“I think we talk ourselves into recession sometimes,” he continued. “Negative growth will just make some people even more worried about their jobs and wary of spending money.”

The Bank of England warned last week that the U.K. is now headed for its longest recession since records began a century ago.

The central bank expects GDP (gross domestic product) to continue falling through 2023 and into the first half of 2024. The projected two-year downturn is set to be “very challenging,” the Bank said, costing around 500,000 jobs, and piling the pressure on already pinched businesses and households.

A woman walks past rundown, shuttered shops in Romford, England.

Tina McKenzie, chair of policy and advocacy at the Federation of Small Businesses, said many small and medium-sized U.K. businesses are now “under attack from various sides,” citing reduced access to cash and labor, as well as inflationary pressures.

U.K. consumer inflation hit a 40-year high of 10.1% in September, while the producer input prices remained stubbornly high at 20%. The BOE has warned that interest rates, currently set at 3%, will now likely have to rise further than previously predicted to push inflation back toward its 2% target.

Still, the worst effects of a forthcoming downturn may not become apparent until the first or second quarter of 2023, McKenzie said. In the meantime, many businesses — particularly those in the hospitality and retail sectors — are just biding their time.

“Businesses are under a huge amount of pressure. Many are aiming to get the Christmas rush over, and then close the doors in January,” McKenzie told CNBC via zoom call.

More than a third (35%) of the U.K.’s hospitality sector say they are at risk of closure early next year due to higher costs, soaring energy bills and weakened consumer spending, according to a survey of operators released last week.

The Bank of England has warned that the U.K. is facing its longest recession since records began a century ago.

Until now, Holliday said his business has been “taking the hit” and absorbing increased production and energy costs to buffer customers. But if by the spring those price rises look set to continue, he’ll have to pass on those costs.

A percentage of the industry will say, for me, there is no next.

For many, however, a further surge in costs could be the death knell in a “three-year uphill struggle” for an industry already maimed by Covid-19 restrictions, staff shortages and inflationary pressures.

“They’re kind of running out of fight,” Holliday said. “A percentage of the industry will say, for me, there is no next.”

Businesses owners will now be looking ahead to the U.K.’s much-anticipated Nov. 17 Autumn Statement, during which Finance Minister Jeremy Hunt is expected to outline £60 billion ($69 billion) of spending cuts and tax hikes to plug the hole in the country’s battered public finances.

But many worry that the Treasury could go too far in its attempts to recover the U.K.’s economic standing — damaged as it was by Liz Truss’ chaotic mini-budget — that it would spell further trouble for struggling industries and stymy economic growth going forward.

“Because of Liz Truss and Kwasi Kwarteng, they went the other extreme and they’re in such a cautious mode,” said McKenzie.

Early drafts of the government’s plan contain up to £35 billion of spending cuts and around £25 billion of tax rises, according to the Guardian. That as the BOE’s Chief Economist Huw Pill warned Monday that extensive tax rises and spending cuts could put Britain at risk of a deeper than expected “economic slowdown.”

The U.K. Treasury said it would not comment on “speculation around tax changes” when contacted by CNBC.

“Our fear is they’re going to go so extreme to please investors. And if they don’t do anything to protect the most vulnerable, then they won’t get the growth,” McKenzie said, citing improved migration policies and a VAT rate reduction as potential areas in which the government could offer support.

And while some business owners like Banner-Price are confident they will pull through as consumers scale back to fewer but more quality experiences and products, his fortunes and those of many others will depend on the wider business community’s ability to weather the storm.

“Even if we survive well, our guests still need to visit thriving local restaurants, cafes, tourist attractions etc. They still need to be able to shop and visit the theatre, catch a taxi and use all the other small businesses,” Banner-Price said.

Don’t want to give your kid a smartphone? Here are some alternatives

Brain expert: The No. 1 thing that sets ‘SuperAgers’ apart from people with ‘weak memory skills’