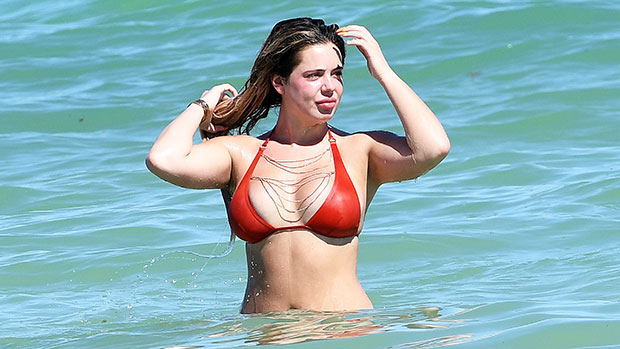 Brielle Biermann looked fabulous when she showed off her behind in a cheeky bikini from her mom’s swimsuit line.

If there’s one thing for sure about Brielle Biermann, 24, it is that she loves to show off her incredible body in sexy swimsuits on Instagram, and that’s exactly what she did in her latest post. Brielle posted a black and white photo of herself, taken from behind while swimming in the ocean. Her backside was on full display in the super cheeky bottoms.

Brielle posted the photo rocking a floral print two-piece from her mom, Kim Zolciak’s, bikini line, Salty K Swim, with the caption, “let’s sail away.” The bottoms were ruched in the center and had a tie in the middle while the top was a bandeau. She kept her long hair down and wet in beachy waves.

Brielle is constantly rocking sexy bathing suits on social media and they’re almost always from Kim’s line, or in some cases, they’re bathing suits she borrowed from Kim. Just recently, she rocked Kim’s Gucci g-string thong that had a large diamond GG medallion at the top of the back. In the photo, Brielle didn’t show off anything other than her butt and gorgeous long blonde hair.

Brielle posted the photo which was taken on a beach with the caption, “my mom bought it first but i wore it first.” Kim took to the comments section to write, “I bought it for us both crazy,” while Brielle’s sister, Ariana, 19, commented, “UNBELIEVABLE.”

When Brielle isn’t borrowing Kim’s suits, she’s modeling Kim’s collection, and one of our favorites was her tiny leopard print string bikini which was the same exact one that Kim and Ariana modeled earlier in the summer. The top was a triangle bikini top while the bottoms were low-rise and had thin straps on the sides.