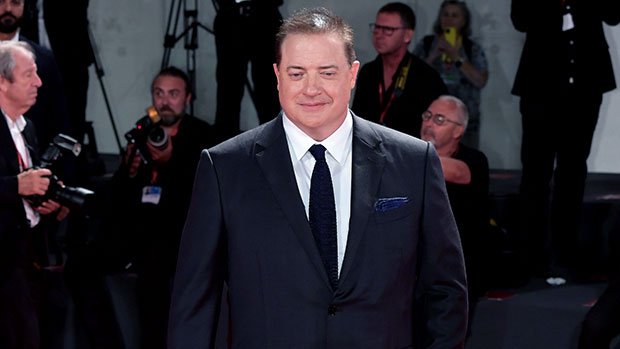 Brendan Fraser, 53, looked very appreciative for the support of his latest role in The Whale at the Venice Film Festival this past weekend. The actor, who plays a 600-pound man named Charlie in the upcoming flick, got emotional after an early screening of the film received a 6-minute standing ovation from the audience. He sat in his seat as the applause erupted before being encouraged to stand up among the other actors in the film.

Brendan Fraser is back — and he sobbed during the #Venezia79 six-minute standing ovation for #TheWhale. pic.twitter.com/y4l10ZFWQa

Before the screening, Brendan was cheered on during his arrival on the red carpet of the festival as he donned a black suit and tie. He posed for photographers with a smile and fans took to social media to express their joy over seeing his appearance. “Brendan Fraser is back and better than ever!” many fans similarly wrote on Twitter and Instagram.

Brendan’s new role in The Whale, which is directed by Darren Aronofsky, is already receiving Oscars buzz. Some reviews say his performance as the morbidly obese man trying to reconnect with his estranged daughter, who is played by Stranger Things star Sadie Sink, is worthy enough to snag an Academy Award, which isn’t too surprising considering the talent Brendan has brought to the big screen throughout his career. The film is based on the 2012 play written by Samuel D. Hunter and from the reception at the Venice Film Festival, it’s sure to be a hit when it hits theaters in Dec.

Before Brendan wowed in The Whale, he talked about making the film, in a 2021 interview with Unilad. “It’s gonna be like something you haven’t seen before,” he, told the outlet. “The wardrobe and costume was extensive, seamless, cumbersome. This is certainly far removed from anything I’ve ever done but not to be coy … I do know it’s going to make a lasting impression.”

The Whale is Brendan’s first film since 2013’s Breakout. Despite taking a break from the big screen, he seems to not have lost a beat. Before his latest release, he was best known for being a main star of The Mummy film series.

Pat Stay: 5 Things About The Canadian Rapper Stabbed To Death At Age 36