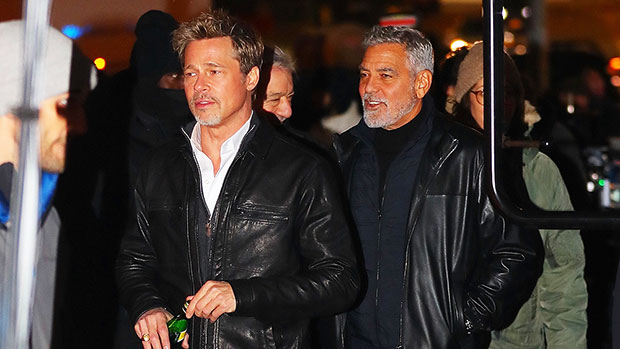 The boys are back! Ocean’s Eleven‘s dynamic duo Brad Pitt, 59, and George Clooney, 61, were spotted filming their upcoming Apple thriller, Wolves, in New York City on Jan. 24. While on the set of the new project, Brad rocked a pair of grey dress pants, a grey sweater, and a white button-up shirt complete with a leather jacket. George, for his part, looked dapper in dark dress pants, and a black turtleneck. He even twinned with his pal in a black leather jacket!

It has been a while since audiences have seen these two Hollywood hunks on the screen together, as their hit Ocean’s Eleven film premiered over 20 years ago in 2001. Following the franchise’s first film, the duo went on to appear in Ocean’s Twelve and Thirteen together alongside Matt Damon, Julia Roberts, and more. There have been talks of an upcoming Ocean’s Fourteen, which The US Sun reported was happening as of Sept. 2022.

“Rumours of a film starring George, Brad and Matt have swirled for years but the timing was off and their jam-packed schedules meant that it was just not possible,” the outlet’s source claimed. “Finally the right team for the job has come together in a bid to make it a huge success and the main stars thought it would be good fun to revisit. The franchise is hugely popular and the brilliant storyline was an opportunity that was too good to miss.” Most recently, the franchise released an all-women film in 2018. Ocean’s Eight stars Sandra Bullock, Carol‘s Cate Blanchett, Anne Hathaway, and AHS star Sarah Paulson.

Aside from the Ocean‘s franchise, the pair’s NYC night of filming comes just three weeks after the 59-year-old was spotted in Los Cabos, Mexico with his latest fling, Ines de Ramon, 30. Brad and his new leading lady were spotted hanging out poolside just two days after the New Year (see photos here). The brunette beauty appeared to be topless while her rumored beau also opted to go shirtless on the sunny day.

More recently, a source close to the couple told US Weekly on Jan. 18, that their age gap is a nonissue for them. “Brad and Ines are having a really wonderful time with each other,” the insider told the mag last week. “Their relationship feels comfortable and playful.” They made sure to note that the age gap “isn’t an issue for either of them,” and that Ines is a “big hit with Brad’s friends.” Brad was previously married to actress Angelina Jolie, 47, from 2014 until their 2019 divorce. The ex-couple share six children including: Shiloh, 16, Vivienne, 14, Maddox, 21, Knox, 14, Zahara, 18, and Pax, 19.