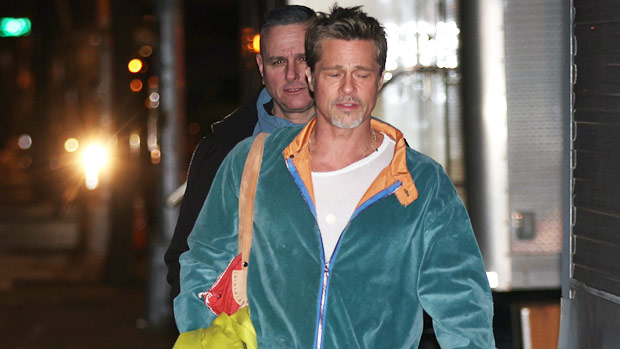 Brad Pitt might have the best fashion in Hollywood! The beloved 59-year-old Oscar winner wore a bold but fabulous outfit as he filmed his upcoming Apple thriller, Wolves, in Harlem, New York on January 24. Brad rocked a teal velour tracksuit over a white T-shirt with a pair of white slip-on shoes. The handsome star, who is still sporting his sexy short haircut, carried a red shoulder bag and a green blanket as he stepped out in the Upper Manhattan neighborhood.

Brad appeared to be on set for his new film all night on Tuesday. Either before or after the tracksuit photos were taken, Brad was spotted with his Ocean’s Eleven buddy George Clooney, 61, as they filmed Wolves in the Big Apple. For those scenes, Brad wore grey dress pants, a grey sweater and a white button-up shirt complete with a leather jacket. Meanwhile, George wore dark dress pants, a black turtleneck, and a black leather jacket.

The pair star in the upcoming Apple project which is directed by Spider-Man: No Way Home leader Jon Watts. Brad and George are producing and starring in the thriller as “two lone wolf fixers assigned to the same job”, according to The Hollywood Reporter. Their involvement in the project was announced in September 2021.

Brad’s been involved in some big-wig movies lately like Bullet Train and Babylon, the latter of which earned him the nomination for the Golden Globe Award for Best Supporting Actor. He ultimately lost in the category to Everything Everywhere All At Once star Ke Huy Quan. Brad was in contention to possibly snag an Oscar nomination, as well, but the Academy didn’t recognize his performance when they announced the nominations on January 24. Instead, Brad spent Oscars nomination day working hard on his new movie and reuniting with his longtime friend George. We can’t wait to see those two share the screen again on Wolves!