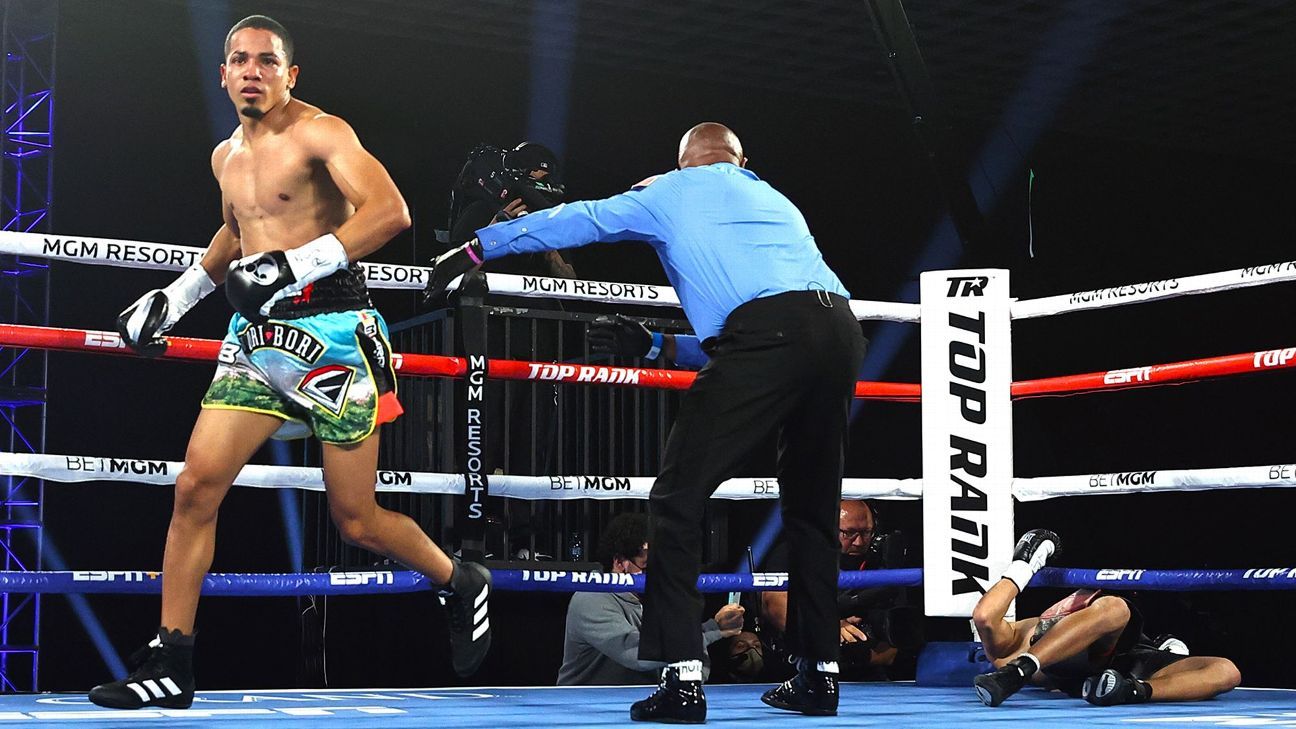 A 27-year-old woman whose body was found in a lagoon in Puerto Rico was a companion of lightweight boxer Felix Verdejo, who turned himself in to federal agents on Sunday night, according to officials.

The body of Keishla Rodriguez was found a couple of days after she was reported missing. She was identified Sunday via dental records, Puerto Rico’s Institute of Forensic Science said in a statement.

A criminal complaint filed by the FBI accuses Verdejo of punching Rodriguez in the face and injecting her with a syringe filled with an unidentified substance bought at a public housing complex. It alleges that he then bound her arms and feet with wire and tied a heavy block to her before throwing her off a bridge at 8:30 a.m. Thursday.

The complaint states that Verdejo then shot at Rodriguez’s body as he stood on the bridge. The complaint says a witness it did not identify helped Verdejo kidnap and kill Rodriguez.

FBI spokeswoman Limary Cruz told The Associated Press that the federal agency was filing charges that would soon be announced. Meanwhile, the U.S. Attorney’s Office said no decision had been made whether to pursue the death penalty.

Verdejo and his attorneys previously declined comment, and police said the boxer did not originally cooperate and refused to answer questions.

Top Rank, which has promoted Verdejo, 27, since he turned pro in 2012, released a statement on the situation Saturday.

“Top Rank’s thoughts and prayers are with Keishla Marlen Rodriguez Ortiz’s family and friends, and with all those in mourning,” the statement read. “We are deeply disturbed by the news reports, and we will continue to monitor developments in the case as it progresses.”

Rodriguez’s family has said she was pregnant with Verdejo’s child. Keila Ortiz, the woman’s mother, told reporters that her daughter had called her before she vanished Thursday and told her Verdejo was going to her house to see the results of a pregnancy test.

“I told her, be careful, because he had already threatened her” and told her not to have the baby, mentioning his career and family, she said.

Verdejo is married but has known Rodriguez since middle school and had kept in touch with her, her parents said. They reported her missing after she never showed up to work at an animal grooming business.

Verdejo (27-2, 17 KOs) is a former Olympian who represented Puerto Rico in 2012. His professional career was temporarily sidetracked after he was hospitalized following a motorcycle crash in 2016.

The case has outraged many in Puerto Rico, where another woman was recently found burned to death after she filed a domestic violence complaint that a judge dismissed. A Superior Court judge has announced an investigation into that decision.

Hundreds of people gathered Sunday at a bridge that crosses the lagoon where Rodriguez’s body was found to demand justice for her and other women killed, with some throwing flowers into the water below.

ESPN’s Brett Okamoto and The Associated Press contributed to this report.

How does the NBA play-in tournament work? Dates, projections and rules explained

Is Dest as good at Barcelona as USMNT fans had hoped?...