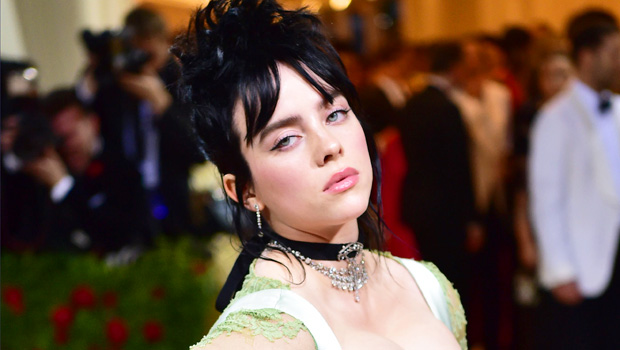 Billie Eilish looks fierce in two new photos posted to her Instagram page on August 1. The singer kicked off a new month by rocking a sexy, summery look, donning a plunging green top which she paired with an open button down to show off the shirt. She completed the look with casual, layered necklaces, and wore minimal makeup on her face. Her freckles were on full display, with her green eyes popping against the shirt of the same color.

The 20-year-old had her hair pulled back into an updo, with bangs framing her forehead. She also showed off rings on several of her fingers to accessorize, holding her phone up to snap selfies in the mirror for her fans. In the background, there was a glimpse of some of her album accomplishments, which were framed and hung up on the wall.

Billie has been keeping a fairly low profile in recent months. However, she did surprise fans with a two-song EP, Guitar Songs, in July. The EP followed the July 2021 release of her album Happier Than Ever, which was recognized with seven nominations at the 2022 Grammy Awards.

Although Billie didn’t take home any honors for the record or its songs, she did win big at the Academy Awards this year. Billie took home the Best Original Song award at the high-profile show. She was recognized for “No Time To Die,” which she recorded for the James Bond movie of the same name. The song won at the 2022 Golden Globe Awards and the 2021 Grammy Awards, as well.

Amidst her professional accomplishments, though Billie recently went through a breakup when she ended her relationship with Matthew Tyler Vorce in May. Although Matthew was accused of cheating to cause the split, he denied rumors of infidelity. “Nobody cheated on anyone,” he wrote on Instagram. “Relationships end. Simple as that. Creating rumors and LYING on the Internet is dangerous.” Billie has not publicly commented on the split.

Billie Eilish’s Tourette Syndrome: Everything The Singer Has Said About Her Disorder Through The Years