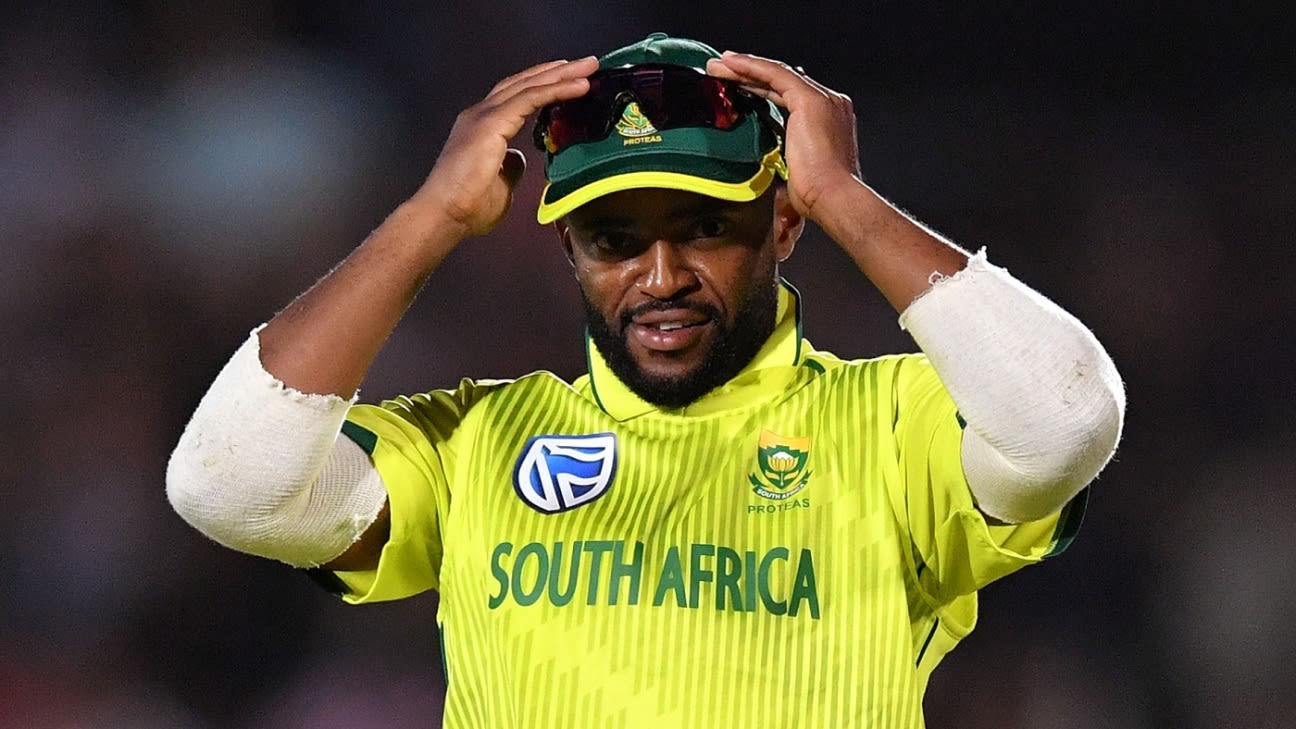 Temba Bavuma will lead South Africa at the men’s T20 World Cup after recovering from the elbow injury that has kept him out since the T20I tour of India in June. It’s also been confirmed that he will play as an opener.
Bavuma missed the entire all-format tour of England to recover, and opted for conservative treatment instead of surgery with a view to being fit for the World Cup. He has made sufficient progress and will make a comeback on the white-ball tour of India, of three ODIs and three T20Is, in September-October, where he is expected to be available for all the games. The squad for the World Cup will play the T20Is, while there are expected to be some tweaks for the ODI squad.
Rassie van der Dussen, however, has been ruled out. Van der Dussen broke his left index finger while fielding during the second Test against England at Old Trafford but batted in South Africa’s second innings, routinely taking his top hand off the bat after playing a shot. He returned home after that match to see a finger specialist and is expected to be out for “up to six weeks”.
“Temba has recovered well. He has been playing for the Lions in Namibia over the last week and he is good to go,” Victor Mpitsang, CSA’s convenor of selectors, said in a press briefing. “Rassie – we are all aware that he broke his finger a week ago. He went for surgery. It will take up to six weeks before he has recovered. Unfortunately, the timing of his injury didn’t come at the right time.”
Van der Dussen’s absence has created an opening for Kolpak-returnee Rilee Rossouw in the squad. Reeza Hendricks, who has come off a run of four consecutive T20I fifties and a 42, is also in the squad, which means South Africa are spoilt for choice in the top order, which also includes Quinton de Kock and Aiden Markram.

But with Mpitsang confirming Bavuma would open – “That’s a role he has played in the last year or so” – Markram might continue to be a middle-order option.

Hendricks and Rossouw, meanwhile, could play crucial roles in that top order too, even thought it might be tricky to fit all the excellent options in, with de Kock and Miller in the mix too.

“We’ve seen the impact of all the players that have come back from Kolpak. We’ve seen the impact they’ve had on our system,” Mpitsang said. “They bring maturity, they know their games. The roles Rilee played against England was great to see. He threw the first punch when we were under pressure. We hope he continues that good form in the World Cup.

“We saw Reeza opening the batting in India with Temba batting at three. Rilee has done a great job at three in England. So we need to see how to balance the top-order.”

An interesting aspect of the squad is the selection of two fast-bowling allrounders, in Dwaine Pretorius and Wayne Parnell. Parnell, before turning out for Northern Superchargers in the men’s Hundred in England, played in the T20I series in India and in England [against Ireland]. While Pretorius, one of the more in-demand T20 cricketers around the world at the moment, also played the T20I series against Ireland, and has since been busy at the Hundred, with Welsh Fire, and then in the CPL, where he is a part of St Kitts & Nevis Patriots’ squad.

“Wayne gives us a different variation upfront, and his performances with the new ball and at the death,” Mpitsang explained. “The way Pretorius has bowled at the middle and the end has stood out. A guy like Andile [Phehlukwayo] had a good run. It’s a good back-up to have.”

As such, the squad doesn’t look too different from the one that took part in the T20 World Cup last year. Van der Dussen, of course, has been ruled out, and Wiaan Mulder has been omitted, while Bjorn Fortuin has been moved to the reserves’ list. In their place, Rossouw and Tristan Stubbs have come in, along with Parnell.

One of the players who might just have made it but hasn’t is Dewald Brevis, the top-order dasher.
“We have been engaging with someone like Brevis in terms of the way forward,” Enoch Nkwe, South Africa’s director of cricket, said. “He is currently at the CPL [with Patriots]. We can’t ignore the fact that he is someone who has played some good cricket. He is very excited to come into the domestic frame and prove himself. He is passionate about South Africa.”

It might have ended up being a toss-up between Stubbs and Brevis, with Brevis losing out.

“We’ve seen how versatile Tristan Stubbs is. The way he has finished innings has been very impressive,” Mpitsang said. “He is young, he is exciting, he is fearless and not only has he showed it at international level but also domestically. He has ticked the boxes. There is enough experience there to guide him if needs be.”

South Africa are in Group 2 in the main round of the T20 World Cup, with Bangladesh, India, Pakistan and two qualifiers.