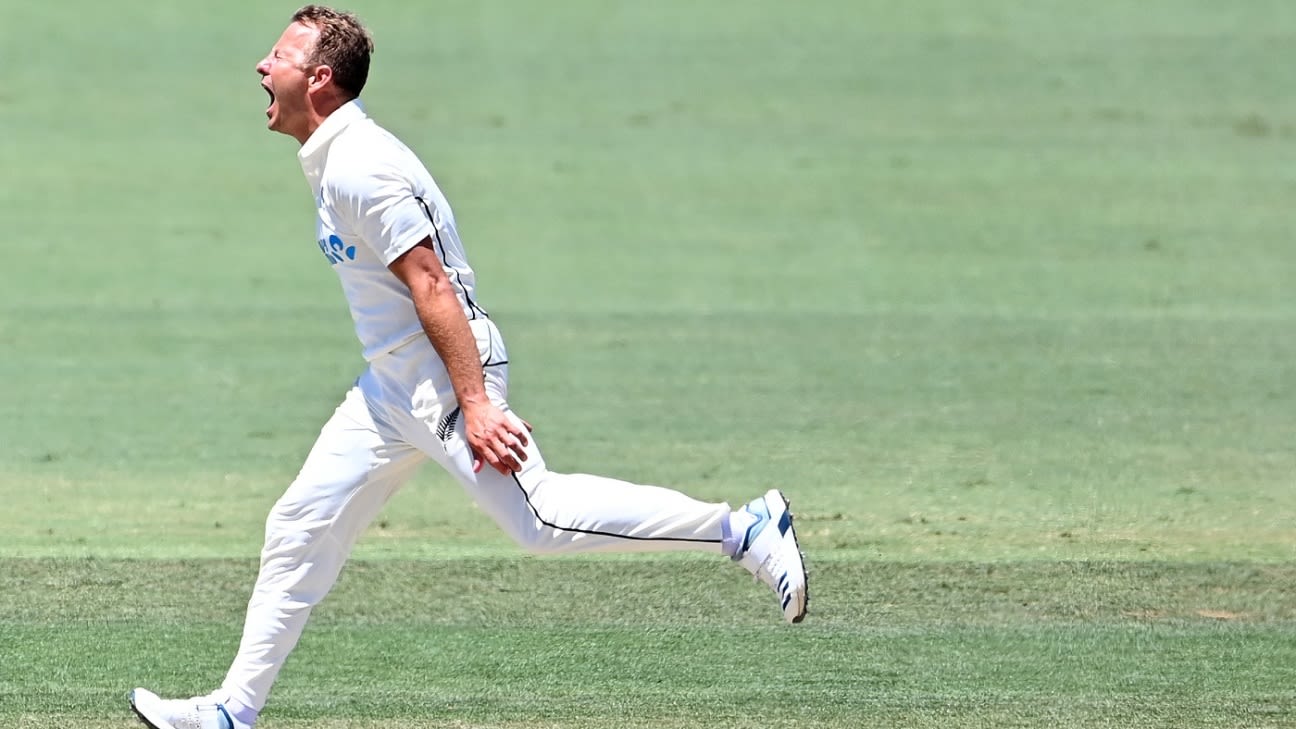 Hosts would have had another wicket had Daryl Mitchell hit the stumps with a direct hit, with Mominul Haque out of the frame

Bangladesh put up a bit of fight on the third morning after being made to follow on by New Zealand. The visitors batted out the 28 overs till the lunch break, reaching 74 for 2. Although they lost Najmul Hossain Shanto minutes before the lunch break, the top three resisted the New Zealand pace attack after a first-innings collapse.
Shanto struck Neil Wagner for three fours and a six in his 36-ball knock, but lost out in his toe-to-toe battle with him, getting caught at fine leg by a tumbling Trent Boult. Mominul Haque, new to the crease, nearly got himself run out trying to get off the mark as Daryl Mitchell missed a direct hit from mid-on, with Mominul out of the frame.
However, Mohammad Naim remained unbeaten on 15 off 81 balls while Mominul was on 2 off 5 deliveries.

But Bangladesh’s openers Shadman Islam and Naim had tried to keep things quiet at the start of the day. Shadman struck three fours before getting caught down the leg side off Kyle Jamieson at the hour-mark having made 21 off 48 balls. Jamieson then had Shanto dropped in the slips shortly after the left-hander got off the mark, as the ball was spilled by the diving Mitchell at third slip in front of Tom Latham at second.

At the other end, the resolute Naim hit his first boundary in the 22nd over with a square-cut off Trent Boult, before Shanto went after Wagner. Bangladesh may have wanted Shanto to tamper his charge a little, but after hitting a few boundaries, a pull shot found Boult at fine leg in the 25th over.

On the second day, Bangladesh were bowled out for 126 in the first innings in response to New Zealand’s 521 for 6 declared. Boult had taken his ninth five-wicket haul, during which he also completed his 300 Test wickets. Tim Southee took three wickets while Jamieson picked up two.

The visitors were reduced to 27 for 5 shortly after tea, followed by Yasir Ali getting his maiden fifty as he added 60 runs for the sixth wicket with Nurul Hasan. But that was all of Bangladesh’s resistance on the second day’s play.