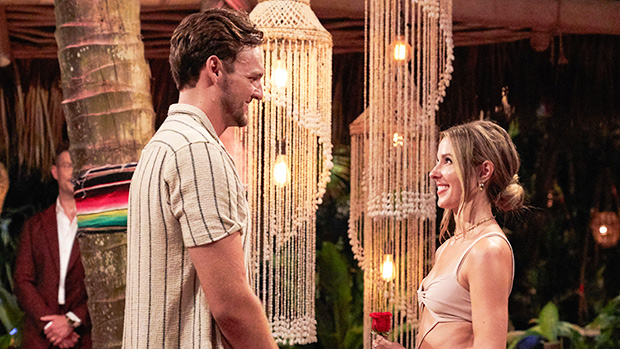 Gabby Windey and Rachel Recchia made an appearance on the Nov. 15 episode of Bachelor in Paradise, and they had some opinions to share with Kate Gallivan about Logan Palmer. Even though Kate and Logan had a good connection, she was already going back and forth about whether or not he’d be the right person for her outside of Paradise. Hearing concerns from Gabby and Rachel, who dated Logan on The Bachelorette, only furthered Kate’s anxieties about the relationship.

“Logan was our only flip-flopper the whole time,” Rachel recalled, referring to Logan dumping her for Gabby on The Bachelorette. “It was just so disrespectful. I don’t respect Logan.” When Kate heard that, she pulled Gabby and Rachel aside to get more information. Kate explained that she had great chemistry with Logan, but Gabby and Rachel were also aware that he was also dating Shanae Ankney on the beach before flipping over to Kate. “Hearing [that], we’re like….not again,” Gabby admitted. “When someone said something about him going on a ton of dates, it’s like…well, naturally. He doesn’t know when something good is in front of him and he doesn’t have it within himself to commit to it.”

The day prior, Logan was asked on a date by Lyndsey Windham, and before giving her an answer, he said he had to talk to Kate. Kate was flabbergasted that Logan wouldn’t just say no on the spot, considering they’d already been through this back and forth. Logan wound up saying no to Lyndsey, but only after Kate told him she didn’t want him to go. Rachel and Gabby told Kate that she deserved someone who was “sure” about her and not willing to potentially flip to someone else, especially this far along into Paradise. “I know you know what’s the right decision,” Rachel told her. “We can only put in so much input. No matter what we say, do what you need to do. Protect your heart.”

Needless to say, Logan was shaking in his boots when he saw his exes talking to Kate. Before Rachel and Gabby left, Gabby told Logan that she had “beef” with him for how he handled things on The Bachelorette, which put him even more on edge. “I got some goosebumps,” he admitted. “I felt my heart pounding. I’m not sure what’s going on there. Hopefully Gabby and Rachel didn’t ruin my relationship with Kate.”

Leaving the conversation with Gabby and Rachel, Kate was “conflicted” about what to do. Aside from what the girls said, she also still had the “lingering” feeling about him not being “man” enough for her because of their seven year age difference. “Logan is tall and hot but we’re in very different places in our lives,” she admitted. “To hear Gabby and Rachel say that he flip-flopped during their season, it does give me some reservations. I’m just torn and confused. I don’t know if I can see an engagement ring [with him] and that’s kind of the point for me. I need to know if we’re a match long term.”

Kate pulled Logan aside to get his two cents on the situation. “I am out of breath trying to convince and explain who I am,” Logan told her. “I want you to see who I am.” They went back and forth over how Logan handled the Lyndsey situation. “It’s not like you told her point blank NO,” Kate explained. “You had to have a conversation with me. I thought we were further along than that. To hear you even entertain the idea of going and then my conversation with Rachel and Gabby…I spiraled.”

Ency Abedin: 5 Things To Know About The New ‘BIP’ Arrival Who Went On A Date With Andrew

Logan assured Kate that she didn’t have to worry that something was always “lurking” around the corner to ruin their relationship. By the end of the conversation, Kate was relieved. “I’m feeling a huge wave of relief,” she admitted. “I want to just squash this with him so we can go into tonight with a clean slate. I’m excited to go with him and just have a ball. I’m really happy with where it’s at and I can’t see it slowing down.” Of course, Kate has had these back and forth feelings about Logan all season long, so we’ll have to wait and see what happens between them next!