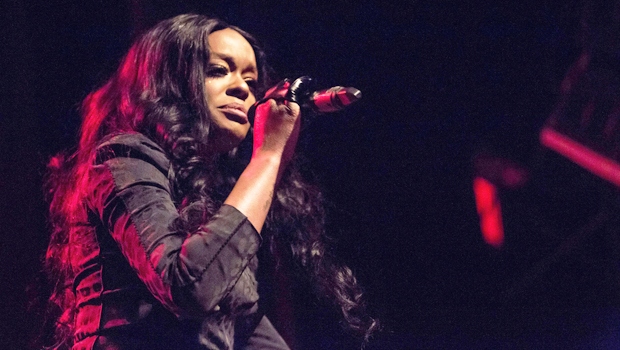 So much for being subtle. Azealia Banks New Music kicked off her musical comeback in the most Azealia way — with an explicit track all about having sex with Kanye West.

There is shooting your shot, and then there’s what Azealia Banksdid. Days after the controversial rapper unveiled the cover art to her new Song. Azealia Banks new music track  “F-ck Him All Night” – in which her fingers nails are painted to spell out the name Kanye West and placed around the crotch of her barely-there denim shorts  – Azealia, 30, dropped the single, and it’s pretty much what one expected.

This single marks the latest chapter in the odd, ongoing Azealia-Kanye saga (though, to be fair, it has been pretty one-sided, so far, with Azealia making a lot of public comments with Kanye not responding at all.) In April, after a report claimed that Kanye wanted his first post-Kim Kardashian divorce relationship to be with an artist who can “speak the same language,” Azealia posted a screenshot of the report to her Instagram, along with a comment. “It’s me guys,” she wrote. ““The powerful black demon entity awaiting in my ovaries and Kanye’s testicle is finally about to be unleashed upon the world. All of you n—– are going to JAIL.”

Azealia Banks wasting no time at all shootin her shot on Kanye West 😱 pic.twitter.com/q6ja9FzDDD

In the comments section, she said that she wanted to be the “mother of the fully African azealia banks x kanye west child,” that they would “most likely have a Sagittarius baby as payback for the both of us sh-t talking Jay-Z,” and that their child would “make the art world stop. It would be another 50 years before anyone was adept enough to cause a shift.” Later, she said that it was all a joke. In the past, Kim has been the target of Azealia’s ire ( “Kim Kardashian ruined Kanye West and won’t be done with him until she’s sucked the last drop of blood,” Banks wrote in 2018) but in September 2020, she demanded Ye “apologize for calling your wife a whore, apologize for terrorizing North West with that abortion meltdown, apologize for sexually harassing Taylor Swift, [and] congratulate Teyana Taylor on the new baby (h/t CaptialXtra.)

Azealia, who was recently seen partying with Lourdes Leon at a Real Housewives of New York event, got engaged to conceptual artist Ryder Ripps earlier in 2021. “I just got engaged, k-nts,” she captioned a Feb. 22 Instagram post, one that showed off a golden ring bearing a menorah. ““I’m Jewish now. MAZEL TOV BITCHES! WE IN HERE…. YERRRRRRR.” A week later, the engagement was off. “Lol, I just dumped [Ryder],” she posted to her Instagram Story. “He’s too insecure for the wildly creative she-wolf in me. I’m keeping the menorah ring tho.”

“F-ck Him All Night” will be part of Azealia’s forthcoming mixtape, Fantasea 2: The Second Wave. Earlier in 2021, she put out “Six Flags” featuring Slim Dollars, a song that is reportedly off her second studio album, Business & Pleasure. This increased output might mean Banks’ career is back on track. In 2011, she broke through with “212,” a track Pitchfork listed as No. 6 on its 200 Best Songs of the 2010s. Producer Jef Martens told Billboardthat “212” was “one of the most relevant songs of the decade” and “is the ultimate fusion of hip hop and electro house. Not that it hadn’t been done before, but never in a way that it came together like that, effortless, without feeling like a mix of two genres or cultures. To me, that is why it’s a work of art. It has a weird unifying quality.”

Owning a racehorse in the Belmont Stakes is more attainable as...

Budget 2021: Amid Opposition sloganeering, Sitharaman highlights increase in MSP under...