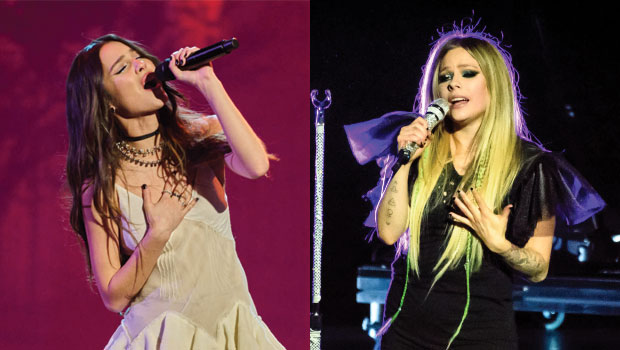 The fans at Olivia Rodrigo’s concert in Toronto on Friday (April 29) must have been shocked — and totally giddy — to see one of their hometown heroes join the singer on stage. The Grammy-winning artist invited Canada’s own Avril Lavigne to take over the microphone and belt out her hit “Complicated.” In social media clips of the dream collaboration, the pop punk princesses threw the crowd in a frenzy with their rocking rendition of the 2002 song.

“Jumped up to sing ‘Complicated’ on stage with @oliviarodrigo in Toronto tonight,” Avril captioned snaps and videos from the performance on her Instagram late Friday night. “It was very sweet to perform with you tonight on your SOUR tour!! Have an incredible tour gurl. Keep killing it. Sending you so much love.”

As the audience cheered on the stars and sang along with the lyrics, Olivia and Avril looked like the perfect pair in their matching outfits. Both donned plaid miniskirts, black leather military boots and ripped tees. They bounced around on stage and bopped their heads to the beat in unison. It was truly an epic surprise for the adoring fans.

Speaking of surprises, Olivia appeared floored at the 2022 Grammy Awards, where she took home three prizes: Best New Artist, Best Pop Solo Performance (for “Driver’s License”), and Best Pop Vocal Album (for Sour). The wins truly shook her up, as Olivia even dropped one of the trophies and shattered it while trying to pose with all three!

In other happy news, Avril recently said “I do” to her beau Mod Sun! The adorable couple decided to celebrate their engagement with a big party back home after they had an incredible proposal in front of the Eiffel Tower. “It was the most perfect, romantic proposal I could ever ask for,” Avril revealed to People. “We were in Paris on a boat in the Seine River. We had a violin player, champagne and roses. It felt like time stood still, and it was just the two of us in the moment.” Talk about a romantic proposal!