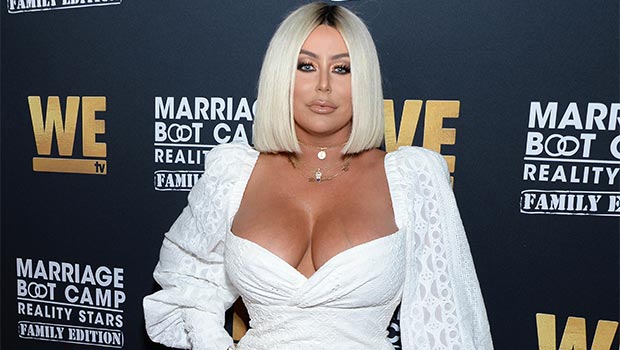 Blonde beauty Aubrey O’Day, 38, is reportedly pregnant with her first baby, as of Jan. 20. The exciting bundle of joy news was first reported by The US Sun, which had a source claim that Aubrey is “so excited” to be a mom. “She’s pregnant,” the outlet’s insider claimed. “She’s early on in her pregnancy, and is so excited.” The bombshell’s pregnancy news also comes just three days after she was spotted at the SPiN Awards Gala on Jan. 17, where she rocked a figure-hugging white dress.

Aubrey reportedly told a reporter at the gala on Tuesday that she recently has been “having mom fever.” She also told The US Sun on Jan. 17 that she was recently dating someone new, however, it is not known who is the father of her baby. “I have someone special in my life,” Aubrey shared. “When I got home from Bali, which wasn’t too long ago, I was open to dating again. After my relationship with Pauly D, I hadn’t had sex or been intimate with anyone for about three years, so this was the first person that I felt comfortable being vulnerable with.”

Although the “Show Stopper” songstress has not publicly addressed the baby news herself, she did open up about a myriad of other personal topics during a Nov. 2022 interview with ET. Aubrey revealed that she recently went on a trip to Bali where she did “two weeks of PTSD shrooming” to combat her Post-traumatic stress disorder. “What I learned at 17 was Ambien,” she said at the time. “I couldn’t sleep on planes. I was the only one in Danity Kane that thought she was going to die on an airplane because I listened to that Alanis Morissette song too many times as a child.”

Aside from her recent interview, Aubrey also released new music on Nov. 21, 2022. Her latest track titled “Couple Goals” was released along with a nude video on her OnlyFans account. The 38-year-old expecting momma also shared a detailed message on her Instagram at the time of the song’s release. “I waited until I wasn’t emotionally attached to my experience before releasing this so that my only intention would be about sharing my experience & support for other people in the same position I was in,” she captioned the black-and-white snapshot. “This is the first time I’m releasing in the Rock genre & it’s by far my favorite vocal performance.. hope y’all enjoy!”

Aubrey’s reported pregnancy also comes two months after she spoke to HollywoodLife about her previous relationship with the Jersey Shore alum. “I had to go to Bali. I had to heal. I had to get in a place that I’m comfortable in,” she told us in Nov. 2022. “And I have a wider perspective of everything. You know, I could take ownership accountability of, of why I stayed in something that was so toxic, why I, you know, why I tolerated what I did. I was suffering from like, you know, not loving myself properly,” Aubrey continued to explain. “And I had to take care of myself and grow and learn and evolve and get to a place where now I can release this,” she added, referencing her new hit song. Pauly D and Aubrey dated from 2015 until they called it quits by mid-2017.