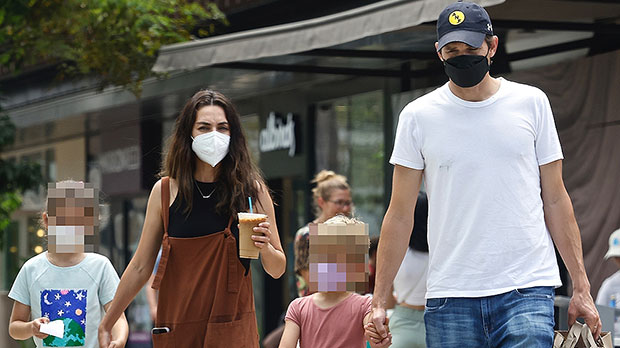 Ashton Kutcher and Mila Kunis are parenting champs! The A-list Hollywood couple stepped out in Los Angeles to run some errands on Saturday, July 30, and brought along their adorable daughter Wyatt, 7, and son Dmitri, 5, to share in the adventure. The Dude Where’s My Car star, 44, rocked a tee and jeans as he held his boy’s hand, while the Black Swan actress, 38, looked chic in brown overalls keeping an eye on her baby girl.

The fun family outing comes as Ashton and Mila — who met on the set of That 70s Show in 1998 but didn’t become romantically involved until 2015 — recently reprised their characters of Michael Kelso and Jackie Burkhart for the upcoming spinoff That 90s Show. “Mila and I were contemplating it,” Ashton told Variety of filming for the new series. “We thought, ‘Listen, we’re only in the position that we’re in because of that show, so let’s just go back and do this.’ We just went back and had fun for a week. It was so random and fun.”

Speaking with ET, he added, “It was super nostalgic and really odd. Like, going back into the basement, just going back on to the set was like, weird. And then being around everyone, it’s… bizarre.”

Meanwhile, Ashton and Mila recently announced that they would match up to $3 million in donations to relief funds for Mila’s home country of Ukraine, which is suffering immensely under Russia’s invasion. “While we are witnessing the bravery of Ukrainians, we are also bearing witness to the unimaginable burden of those who have chosen safety,” the couple said in an Instagram video post. “Through GoFundMe, this fundraiser will provide an immediate impact on refugee and humanitarian aid efforts.”