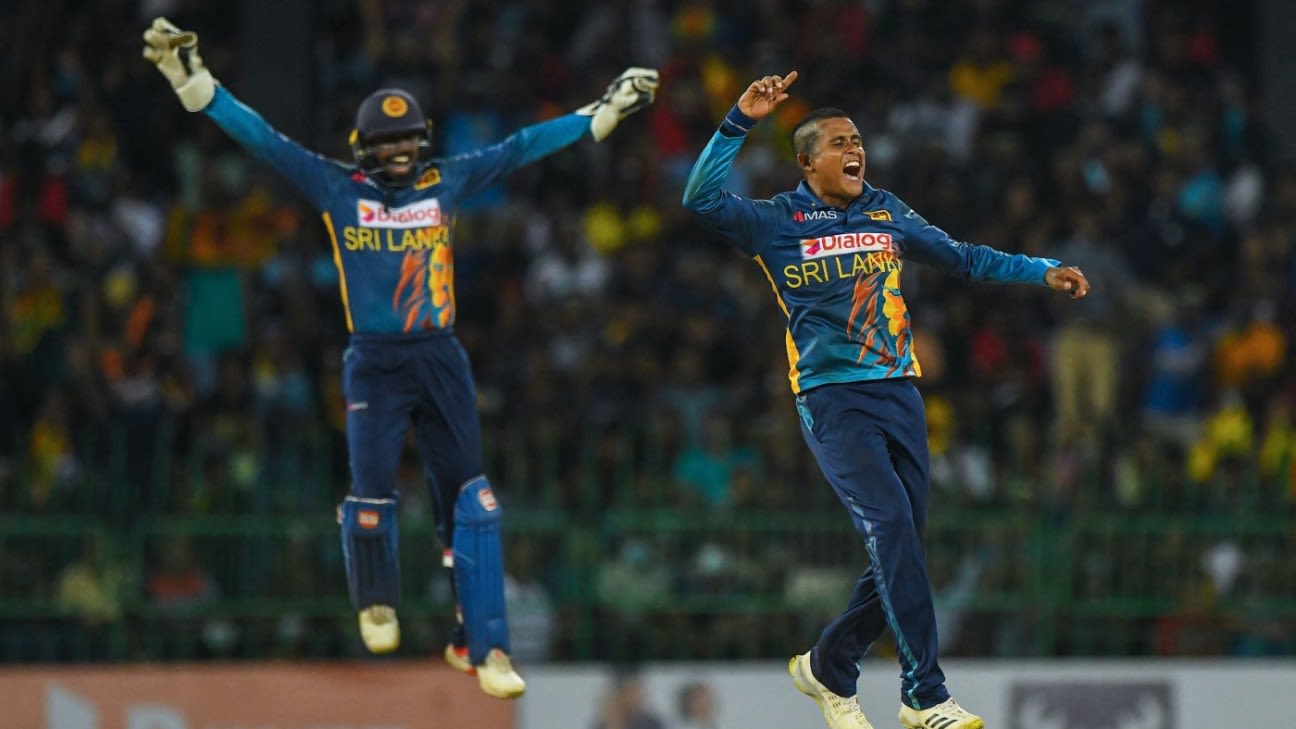 Australia seemed to be flying towards their target at one point, but were ambushed by Sri Lanka’s spinners with 70 to get. They limped their way through the late overs, and fought valiantly to take this twisting match to the last ball. But Sri Lanka held on by their fingertips to send a raucous Khettarama into raptures.

Having let what seemed like a comfortable final over become dire by conceding three fours to Australia’s No. 10 Matthew Kuhnemann, Dasun Shanaka bowled a slower ball with five to defend and had the batter sky the ball to Charith Asalanka, who took a comfortable catch at cover.
Sri Lanka’s phalanx of spinners, especially Dhananjaya de Silva and Jeffrey Vandersay, scripted the victory, but the biggest contribution came from the bat of Asalanka, who scored his maiden ODI century after he and de Silva lifted Sri Lanka from 34 for 3 with a century-stand, de Silva making a smooth 60 off 61.
De Silva then claimed two wickets in a crucial middle-overs passage that sucked the air out of Australia’s chase. Among his victims was David Warner, whose 99 off 112 seemed to have set Australia on track for a series-levelling victory.
The four-run win sealed the series 3-1 – Sri Lanka’s first bilateral series victory at home over this opposition in 30 years.

That Shanaka was bowling the final over at all was somewhat counterintuitive. With Australia needing 19, perhaps the thinking was that a No. 10 could smear a spinner out of the ground with more ease than a seam bowler. Legspinner Vandersay, however, had been bowling beautifully from that end, having claimed two wickets in the night, and conceding only 10 from his two previous death overs.

Having missed the first ball, Kuhnemann blasted a four past point, shovelled Shanaka over his shoulder to the fine leg boundary, then bashed him over mid-on to set up the last-ball finish. Following several mid-pitch conferences and messages from bowling consultant Lasith Malinga, who was prowling the boundary, a Sri Lankan heartbreak was avoided.

Australia too may reflect that they were surging toward victory at one point. With Warner closing in on a well-deserved hundred, and Travis Head batting comfortably, they had 70 to get with 86 balls available, with six wickets in hand and likes of Glenn Maxwell still to come. The series seemed to be headed to a decider. But in nine balls the chase nosedived. Head was out first, as de Silva pushed one through quickly, and the batter played around it, his feet glued.

The next two wickets were huge: those of Maxwell, perhaps Australia’s best batter of the tour so far, and Warner, who had paced his innings beautifully. Maheesh Theekshana got Maxwell lbw through a review. He turned his googly sharply, and hit the batter above the knee-roll, pleading in appeal. When it was turned down he was adamant the decision be sent upstairs. The result was three reds – the ball hitting the batter in line with off, and projected to crash into leg stump.

Then, next over, de Silva pulled Warner out of his crease with a flighted, hard-spun delivery, which beat the batter’s outside edge. Wicketkeeper Niroshan Dickwella took the bails off before Warner could regain his ground. If he had hit that extra run, it would have been his 19th ODI ton.

Australia continued to fight, primarily through Pat Cummins whose 35 off 41, which comprised mostly singles, as he took the game deep. With 19 needed off 8, though, Chamika Karunaratne hit him in front of the stumps with a yorker, as he attempted to whip the ball to leg. With Australia’s No. 10 and 11 now together in the middle, that should have been the death of Australia’s chances. Then Kuhnemann made a stand in the final over.

Although de Silva’s half-century was full of all the delectable de Silva strokes – the square drives, the jaunts down the ground, and the sweeps, including the lofted one over midwicket that he used to particularly good effect – Asalanka’s innings began nervily. Having arrived while Australia’s quicks were dominant, he could have been out twice in his first six balls, most extraordinarily when a Cummins delivery shaved his leg stump but failed to dislodge the bail.

De Silva kept the bowlers at bay during their 101-run partnership, but after he left, Asalanka took control, peppering the midwicket boundary in particular, with runs generally flowing heavily on the leg side. It took him 60 balls to get to 50, then only 39 more to complete his first international hundred. He forged significant partnerships with Dunith Wellalage and Wanindu Hasaranga, and at one stage seemed to be taking Sri Lanka to a score of around 280. But then, he holed out to deep midwicket against Cummins, in the 48th over.

Then Sri Lanka lost their two final wickets to silly run outs – having earlier also lost Shanaka the same way – and ended up with a competitive total instead of an imposing one.

Australia’s bowling had largely been carried by their quicks. Cummins and Mitchell Marsh took two wickets apiece. While Kuhnemann also claimed two, he went at seven an over, where Cummins and Marsh maintained economy rates of a little over four. The other spinner, Maxwell, had provided the first wicket, but conceded runs at 6.12.

Sri Lanka, meanwhile, had fielded four frontline spinners, and no specialist quick. Eight bowlers were put to use in the defence of 259.