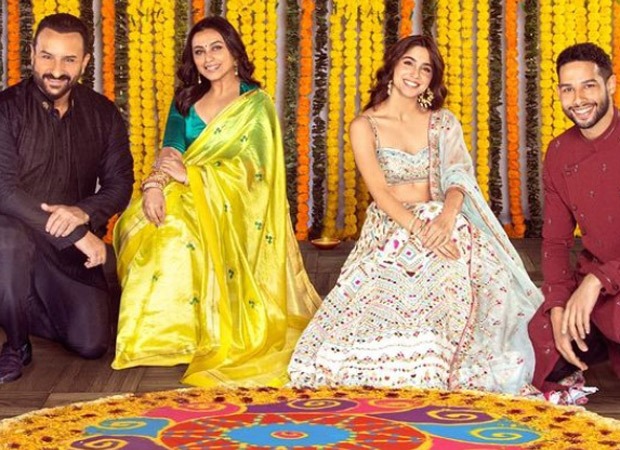 Yash Raj Films’ Bunty Aur Babli 2, which is set to release worldwide on November 19, 2021, is an out-and-out comedy that will pit two sets of con artists called Bunty and Babli, from different generations, against each other! Saif Ali Khan and Rani Mukerji play the OG Bunty Babli while Gully Boy hunk Siddhant Chaturvedi and the gorgeous debutant Sharvari, play the new Bunty Babli. The family entertainer is releasing this festive season and the cast members are thrilled that the industry is set to celebrate Diwali after two long years as big films start hitting the cinemas now.

Saif says, “As an industry, we are thrilled to be celebrating Diwali after two years! Our industry was the worst hit because of the pandemic and it is bouncing back now. We are confident that audiences will support us and come back to the cinemas to watch good films now that theatres have opened across India. Films have been a part of festivities forever as families come out to watch movies to celebrate the occasion. We are confident that it will be no different starting this Diwali.”

Rani says, “Diwali has always been about togetherness, and this year, it holds more meaning, more significance as we are celebrating this festival after 2 long years due to the pandemic. Movies are meant for a community viewing experience and now we can finally do that again. So, we are sure that audiences will come back to the big screen with their families to watch entertaining films starting this festive season. Bunty Aur Babli 2 is a full family entertainer and we wish to deliver on that promise.”

Siddhant says, “Cinema and celebrations have always gone hand in hand. All of us have so many happy memories attached to watching films in cinema halls. It’s been two years since we have done that together. It’s been two years since we have celebrated as a community. We are seeing a glimmer of hope now and I’m certain that people will love to watch great entertainers on the big screen. Let’s return to the theatres and enjoy movies the way they are meant to be.”

Sharvari says, “It is an amazing feeling that cinema halls have opened this festive season! The place that entertained everyone at every season, transported everyone to a whole new world, is back this Diwali. It is time that we celebrate movies on the big screen. Let’s celebrate togetherness this festive season. We are hoping to bring people back to the theatres because they have taken a lot of precautions to make things safe for audiences. We wish everyone a Happy Diwali and we promise that audiences will be thoroughly entertained by our film Bunty Aur Babli 2.”

Yash Raj Films’ out and out family entertainer Bunty Aur Babli 2, which is set to release worldwide on November 19, 2021, has been directed by Varun V. Sharma, who has worked as an Assistant Director in YRF’s biggest blockbusters Sultan and Tiger Zinda Hai.

ALSO READ:  “Humbling to receive the love that we are getting as a new pair”- Bunty Aur Babli 2 stars Siddhant Chaturvedi and Sharvari