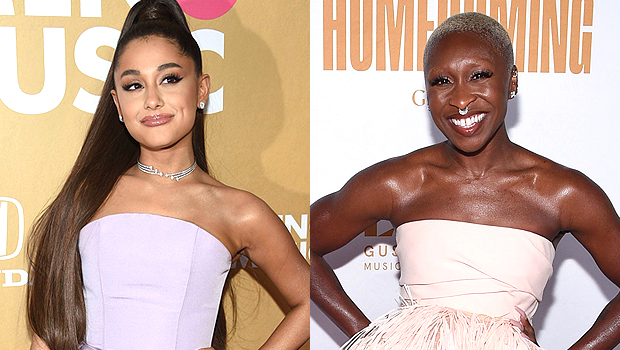 Ariana Grande is coming to the big screen! The pop star was just announced to play iconic good witch Glinda in a movie adaptation of ‘Wicked’!

Ariana Grande, 28, was emotional after finding out she’s going to be starring in a new Wicked film adaptation! The Grammy winner is set to play Glinda the Good Witch in the movie version of the iconic broadway musical, which is being produced by Universal Studios. Ariana had put her hands over her face as she sat in front of an Apple MacBook, presumably on a video call with director Jon Chu who delivered the news. “thank goodness,” she captioned the image posted on Thursday, Nov. 4, adding a heart with arrow emoji and tags for Jon, co-star Cynthia Erivo — set to play Elphaba (later Wicked Witch of the West) — and the film itself.

In the photo dump, Ari also shared a pic of a gorgeous pink flower bouquet from her new co-star Cynthia. “Pink Goes Good With Green,” a quote read, following a message from The Outsider actress. Pink refers to the character Glinda, while green is the signature shade of Elphaba. “Congratulations Miss A, the part was made for you — I look forward to sharing this musical journey with you. Love, Cynthia,” the inserted card said. The Sam & Cat alum also shared screenshots of a three way call between herself, Cynthia and Jon, followed by just a call between the ladies who were both beaming.

Cynthia also took to social media, clearly emotional over the massive career milestone. Holding her hands over her mouth, the English actress was in tears as she found out she got the role. “Pink goes good with Green,” she wrote with three green hearts. Ariana also sent her a stunning pink-and-green flower arrangement from legendary London florist McQueens Flowers. “Dear Cynthia,” the Florida native began in her card. “Honored doesn’t even begin to cover it. I cannot wait to hug you. See you in Oz. All my love, Ari,” she signed off in the handwritten card. Notably, Cynthia has had a decorated career with several awards — already having won a Tony, daytime Emmy and GRAMMY.

Wicked is a prequel to the iconic Wizard Of Oz, which follows the story prior to Dorothy’s arrival. Broadway legends Idina Menzel and Kristin Chenoweth respectively played Elphaba and Glinda in the highly successful original run, which began back in 2003. A film version has been in talks for some time, with Crazy Rich Asians director Jon Chu coming on board in February.