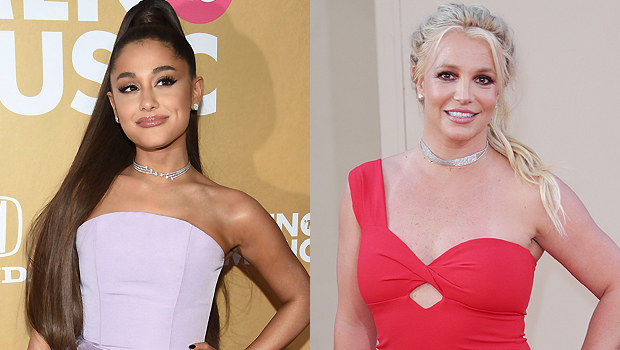 It’s a pop star love fest! Britney Spears, 40, and Ariana Grande, 29, shared love for each other on Instagram, after Brit gave a shout-out to Ari and her fragrance line on November 10. “I know I shouldn’t say this because I have my own line of perfume 🙈🙈🙈😬😬😬 … but I’m obsessed with @ArianaGrande’s fragrance line,” the “Circus” singer, who has released several perfumes over the years, wrote in the post. “I have the spray and two bottles from it !!! I guess I’m sharing this now that I can breathe better and it smells so good 🤷🏼‍♀️🤷🏼‍♀️🤷🏼‍♀️🙄🙄🙄 !!!” she added.

Ariana responded to Britney’s kind words in the comments section and shared some love back to her fellow pop star. “🫶🏻🧘🏼‍♀️🫶🏻🧘🏼‍♀️🫶🏻🧘🏼‍♀️i love yours as well ! always have and will. sending you so much love, queen ♡,” Ari wrote. The Wicked star has almost a dozen fragrances with Luxe Brands, including her Ari by Ariana Grande perfume.

Fans praised Britney and Ariana’s interaction in the comments. “OMG i love thisss,” one fan wrote. Another said, “ladies maybe one day we could get a collab.” A third fan told Ariana that she should invite Britney out to lunch. We agree that this would be such a sensational friendship!

This isn’t the first time that Britney has given a shoutout to another famous female on her Instagram. The “Womanizer” hitmaker has previously praised Selena Gomez, Drew Barrymore, and more women with kind remarks. But someone who Britney was a little upset with recently was Millie Bobby Brown, after the 18-year-old Stranger Things star expressed interest in playing Britney in a documentary. “Dude, I’m not dead,” Britney wrote in yet another lengthy Instagram post on Nov. 8. The “Baby, One More Time” songstress took a sassy tone in her Instagram post where she clapped back at Millie. Then, she turned her attention towards her parents Jamie and Lynne Spears, who she has no love for.

Ever since she was freed of her conservatorship last year, Britney hasn’t held back against anyone on Instagram. That definitely doesn’t seem to be changing anytime soon.