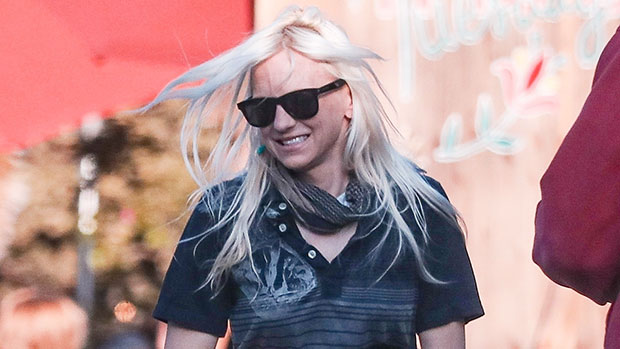 Michael Barrett wore a simple band on his wedding ring finger, as he got really cozy with his fiancé, Anna Faris.

Did anyone hear wedding bells? Anna Faris’s, 44, fiancé Michael Barrett, 51, prompted wedding speculation, when he was photographed wearing a band on his wedding ring finger to dinner in Santa Monica on Tuesday July 20. The actress and cinematographer were grabbing dinner at Tallula’s Mexican restaurant with Anna’s son Jack Pratt, 8.

In the photo, Michael had his left arm around the House Bunny star, and it looks like he’s wearing a band around his ring finger. Even though it looks like Michael could be wearing a band on his wedding ring finger, Anna looked like she was still only wearing her huge emerald-cut, yellow diamond ring. The couple looked like they kept their outfits casual for the dinner. Michael sported a black baseball cap and navy blue shirt. Anna rocked a striped polo and a pair of skinny jeans for the outing.

Michael and Anna have been engaged for over a year! The Scary Movie actress first revealed that she was engaged during a February 2020 appearance on The Late Late Show. Anna and Michael have been dating for almost four years now. The couple were first spotted together about a month after she separated from her second husband Chris Pratt, 42, in 2017. Before they’d even dated, Anna and Michael had worked together on the 2018 rom-com Overboard, which Anna starred in and Michael was the cinematographer for.

Anna was married twice before she got engaged to Michael. Her first marriage was to actor Ben Indra, 42, who she wed in 2004. Their marriage lasted three years, with them separating in 2007 and divorcing the following year. In 2007, she met Chris Pratt on the set of Take Me Home Tonight. The couple got engaged in 2008 and married in July 2009. Chris filed for divorce in December 2017, after the couple separated that summer. Despite the divorce, the pair still co-parent their son Jack together. After the divorce, Chris also met someone special and got married to Katherine Schwarzenegger, 31, in January 2019.

Shaima Reveals Why A Collab With The Weeknd Is Her Ultimate Goal: ‘I Have A Special Love For Him’