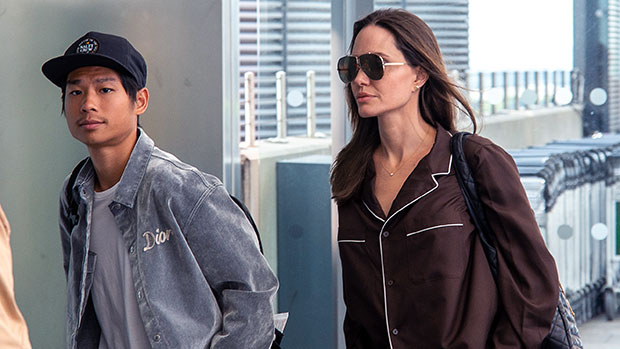 Angelina Jolie has a gorgeous wardrobe including even her pajamas. The 47-year-old actress wore a set of brown silk pajamas to London’s Heathrow Airport on Thursday, July 28. Angelina also wore a pair of light brown Valentino sandals and aviator sunglasses. With her son Pax, 18, by her side, Angelina carried a black bag over her shoulder as the pair headed to their flight after a quick getaway to England.

Pax wore a gray Dior jacket over a plain white T-shirt and a pair of black jeans. The teenager also sported a pair of grey sneakers and a black hat. Pax walked through the airport with a black backpack over his shoulders next to his famous mother, who has been spending a lot of time in Europe directing her new movie, Without Blood, in Rome, Italy.

On her days off, Angelina has been seen out and about in Europe with her children, which includes Pax, Maddox, 20, Pax, 18, Zahara, 17, Shiloh, 16, and 14-year-old twins Vivienne and Knox. She recently celebrated Vivienne and Knox’s birthday in Rome and her ex Brad Pitt (who is also the father of her children) flew there to reportedly celebrate with them.

The former couple once known as “Brangelina” have been in a heated legal battle over the custody of their kids. Angelina wants full custody over Zahara, Shiloh, Vivienne, and Knox, who all aren’t 18 yet, while the Fight Club actor wants to continue sharing custody. The exes have also been at odds over their previously co-owned winery, Chateau Miraval. Angelina sold her 50% share of the company which resulted in Brad filing a lawsuit against her. But the Maleficent actress’ team successfully subpoenaed documents from Brad which was a small victory for Angelina in the ongoing case.