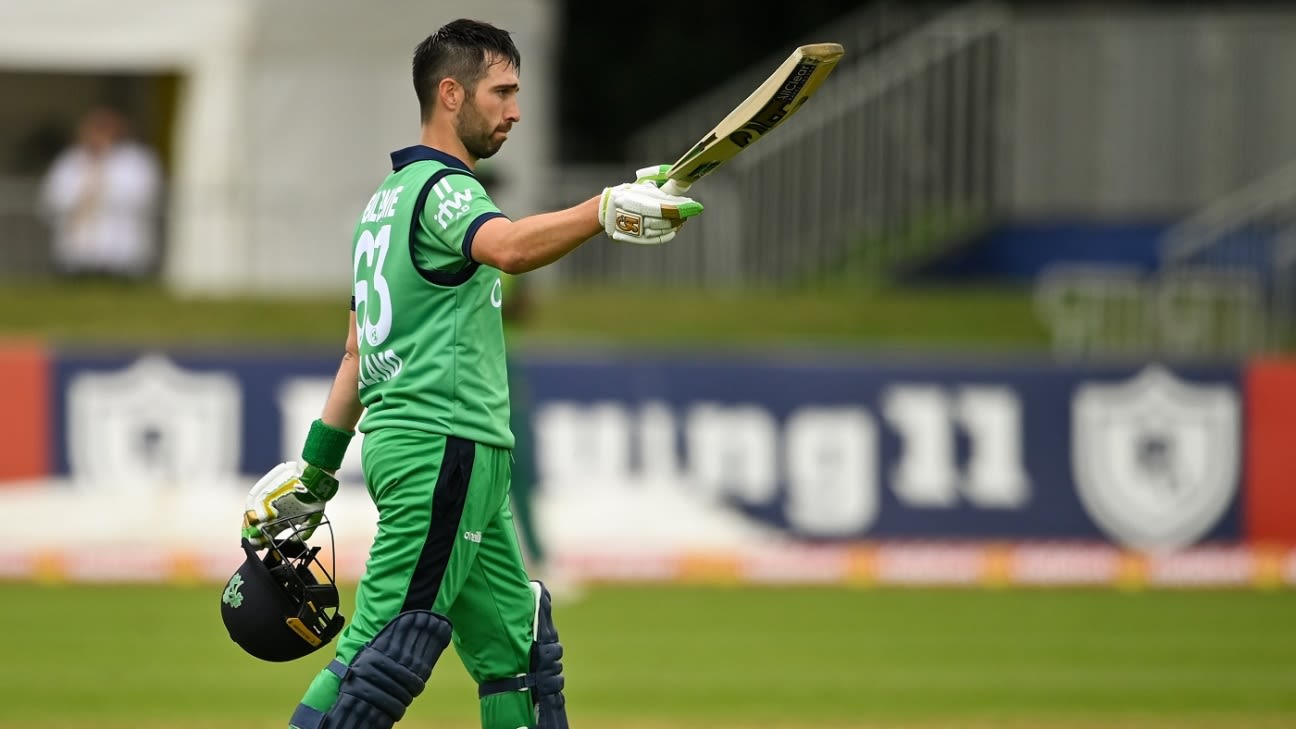 The captain, who scored a hundred, called Harry Tector’s knock “probably the innings of the day”

Ireland will celebrate their first home ODI win over a team ranked in the top eight with a “few beers,” but captain Andy Balbirnie wants their focus to be on overturning big teams more often in their own backyard.
Their 43-run victory in Dublin is the first time Ireland have beaten South Africa in seven ODIs, and the only the fourth time they have beaten a team in the top five after their victory over Pakistan in the 2007 World Cup and England in 2011 and last year.

“We’ve beaten big teams before but we haven’t beaten them consistently. We don’t have the players these teams have, we don’t have the infrastructure or the exposure. A lot of the South African team have played in the IPL. We don’t get that,” Balbirnie said. “So what we do, when we do play these big teams, we get the most of out of these games and we try to put in our best performance. We are thrilled and beating them once off is great but winning a series at the end of the week will be so important, because it shows we’re making strides.”

Already, Ireland have some claim on that. They have 15 points towards their World Cup Super League tally from the first two matches in this series, which Balbirnie admitted he would gladly have taken if offered pre-series, and put in what he called as “complete a performance since I have been involved,” in the second match.
Ireland posted their highest score against South Africa – 290 – built on Balbirnie’s century, and decorated by Harry Tector‘s 68-ball 79. Balbirnie promoted himself to open in the absence of injured William Porterfield and described it as “something different” and it continued his impressive returns against South Africa. Balbirnie has three fifty-plus scores from three innings against them, and this was one is his favourite. “It’s nice to get runs but they are a lot sweeter when you come out with a win,” he said.

Tector was playing in his 12th ODI and could prove to be the kind of player that will help Ireland accelerate their innings. “Harry is a quick learner and a very impressive person. A lot of our guys have been thrown into the deep end, playing big teams but these are the players we need to invest in and put time into,” Balbirnie said. “The last series in Holland, Harry has shown promise. He is looking really impressive in that No.4 position. That was probably the innings of the day.”

On a pitch that seemed to become easier for batting as the match went on, South Africa would have fancied their chances of chasing a tall total but “we managed to squeeze them and we took our chances,” Balbirnie said.

South Africa’s captain Temba Bavuma described the difference between the fielding displays as being “like chalk and cheese” after South Africa dropped two catches and gave away 95 runs in the last 10 overs. Ireland held on to all their chances, effected a run-out and forced a collapse of 8 for 88 to leave Bavuma frustrated.

He indicated that South Africa would make changes for the decider but insisted they had not taken Ireland lightly by resting star batter Quinton de Kock and fast bowler Lungi Ngidi.

“With Quinny, we are trying to manage his workload and get Janneman [Malan] into the side – he has done very well in white-ball cricket,” Bavuma said. “With Lungi, from a workload point of view, in the last game, his speeds were lower than normal. That was the thinking behind those decisions.”

Balbirnie expects South Africa to go back to what they think their strongest XI is for Friday’s finale and wants his own team to keep the foot on their gas as they hunt a series win. “We’ve played really good cricket over the last two games so it will be disappointing if we drop our standards for the last game. They have just come off a tour of West Indies so they are looking to rest people and rotate people but when we get opportunities to play these teams we want to come out all guns blazing and hopefully turn them over.”

Beyoncé leads a masterclass in how to ace thigh-high slit sexy...

Chrissy Teigen Bares All 6 Months After Removing Breast Implants As...