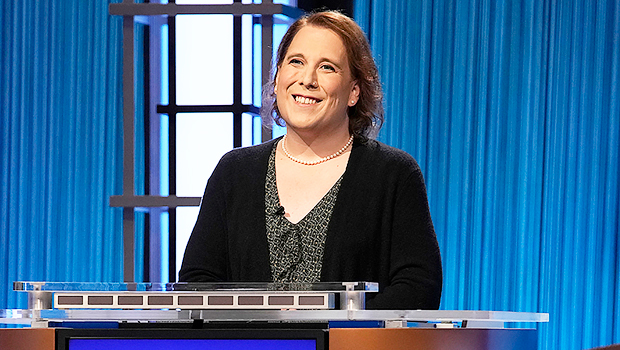 Learn all about Amy Schneider, the history-making ‘Jeopardy!’ contestant with over $1M in earnings whose personal belongings were stolen during a robbery.

Amy Schneider is kicking butt on Jeopardy!. The 42-year-old quiz show contestant has become an icon for the transgender community, winning n 28-straight games, as of the Friday, January 7 episode. Her winnings currently total over $1 million — becoming the fourth contestant to cross that mark. Amy won her first game on November 17, and since then, she’s been absolutely dominating.

Following Amy’s historical moment of crossing the $1 milllion mark, Nick Adams, GLAAD’s Director of Transgender Representation told HollywoodLife, “Amy Schneider’s incredible run on Jeopardy! allows families all over the country to get to know her as someone who is great at word puzzles, has in-depth knowledge on a range of topics, and who also happens to be a transgender woman. Amy is using her history-making appearances and new platform to raise awareness of transgender issues and share a bit of her personal story too.”

Below, everything you need to know about Amy Schneider.

Amy is from Ohio.

Amy is originally from Ohio, though she now resides in Oakland, California, according to her Jeopardy! profile. She lives in Oakland with her girlfriend, Genevieve, and their cat, Meep.

Amy has been open about being a trans woman throughout her appearances on Jeopardy!. However, in a Twitter thread at the end of November 2021, Amy explained how she didn’t want her stint on the show to be “too much about being trans.” She added, “The fact is, I don’t actually think about being trans all that often, and so when appearing on national television, I wanted to represent that part of my identity accurately: as important, but also relatively minor. But I also didn’t want it to seem as if it was some kind of shameful secret. While it’s gratifying to know that people didn’t necessarily know I was trans until they read about it, I do want people to know that aspect of me. I think being trans is really cool!”

She was recently robbed.

Ahead of her 25th game on January 4, Amy revealed on Twitter that she was robbed. “Hi all! So, first off: I’m fine,” she tweeted, before adding, “But I got robbed yesterday, lost my ID, credit cards, and phone. I then couldn’t really sleep last night, and have been dragging myself around all day trying to replace everything.” Amy then said that because of the robbery, she likely wouldn’t be writing her game thread for the Jan. 4 episode. “And if I keep winning, it may take a bit for me to get caught up,” Amy said. “Thanks for your patience!”

There’s a few ways that Amy has made Jeopardy! history so far. For starters, she’s become the first transgender contestant to reach the next Tournament of Champions, which previous champs like Matt Amodio, Jonathan Fisher, and Brian Chang are also eligible for. She’s also the first woman to break the top earnings spots and is the show’s top-earning trans contestant. Plus, Amy has broken former contestant Julia Collins‘ record of most consecutive wins for a woman, after winning her 21st match on December 28. (Julia had previously set the record with 20 wins in 2014.) “In my highest of high hopes, I never dreamed of matching Julia’s streak,” Amy wrote on Twitter, after her historic victory. “It’s hard to say how I felt: proud, dazed, happy, numb, all those things,” she added.