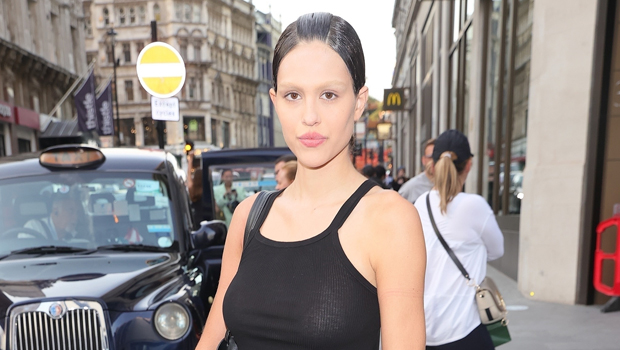 Model off-duty: Amelia Hamlin showed off a dramatic eyebrow transformation in London after walking the runway for Richard Quinn’s show.

Amelia Hamlin has ditched her brows! The model, 20, hit the streets of London on Tuesday, Sept. 21 amid London Fashion Week with a notable new beauty makeover: bleached blonde eyebrows. The daughter of Lisa Rinna and Harry Hamlin looked comfortable and stylish in a black crop tank and black trousers for the outing.

The model bleached her brows early on Tuesday ahead of the Spring 2022 Richard Quinn show, where she walked the runway. The dramatic new look was a part of the show, as several models, including Kate Moss’ daughter Lila, also hit the runway in ready-to-wear pieces with the same bleached blonde brows on Tuesday.

Amelia documented one of her looks on Instagram. “THANK YOU @richardquinn @kegrand @bitton so grateful to this whole entire team,” the model captioned the post. “i’m on cloud 9… pinch me.” In her snapshot, she wore a floral poof dress with black pants from the London-based designer’s new collection.

The look is a major departure from the revealing ensemble she wore over the weekend. Amelia attended a Perfect Magazine party in London on Sunday, Sept. 19 and wore a see-through Natalia Fedner metallic top that freed the nipple and a skirt to match. On her Instagram Story the following day, she shared a screenshot of her text message conversation with her family, in which she apologized to dad Harry for the risqué look. “sorry for my nipped dad it’s fashion,” she texted.

The model has been keeping busy following her split from Scott Disick. The two called it quits earlier this month after nearly a year of dating. While the breakup came amid the drama of Scott’s alleged leaked messages about ex Kourtney Kardashian and Travis Barker’s PDA in Italy, a source previously told HollywoodLife that while the messages shared by Younes Bendjima was the “final straw” for Amelia, other factors contributed to the breakup.

“Things between them were already on the fritz and this breakup was coming at some point regardless of Scott’s DM,” the source explained to HL. “The relationship had just run its course and Amelia was already thinking about breaking up with him before this whole situation unfolded in the public eye. . . She’s not holding onto any hope at a reconciliation. She’s simply looking to move on with her life and enjoy being single for a bit.”