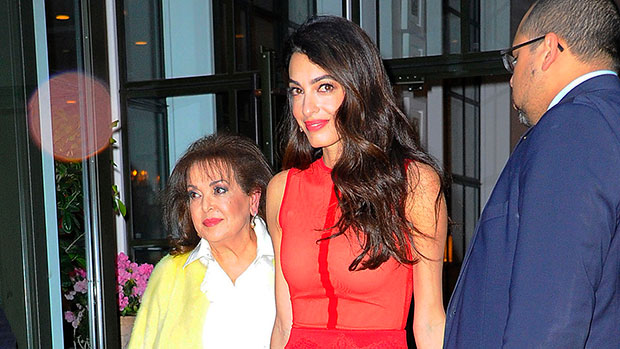 Amal Clooney was red out heading for dinner! The human rights lawyer, 44, stunned in a red dress with a sheer bodice featuring an opaque seam, attached to a skirt with an embroidered patterns on Thursday, April 28. She paired the stunning cocktail-length number with an on-trend pair of clear PVC pumps featuring a silver toe, and a gold and black box clutch.

The 5’9″ beauty kept her signature raven haired looks down and in a loose curl, showing off her glamorous diamond drop earrings. Amal was leaving the Whitby Hotel in Midtown with her mother Baria Alamuddin for dinner. George Clooney‘s mother-in-law was also looking gorgeous in a perfectly tailored pair of white dress pants with a center seam, along with crisp white leather booties and a blouse. She added a dash of color over top with a furry yellow cardigan, and held onto what is likely a pricey alligator skin handbag.

Just a day ago, Amal spoke out about the ongoing conflict between Ukraine and Russia during an informal meeting of the United Nations Security Council, also in New York City. “Ukraine is, today, a slaughterhouse,” the mom twins Alexander and Ella, 4, said in her powerful speech. “Right in the heart of Europe. Putin’s aggressive war is so outrageous that even after warnings from the US, and Russia’s long criminal record, Ukrainians could not believe this could happen.”

The Beirut native, who was raised in London, said she is still trying to “process” the horrific headlines that surface on a daily basis. “I still read news headlines not knowing how to process them. Could it be that thousands of children are being forcibly deported to Russia?” she questioned. “Are teenage girls being raped in the street in front of their family and neighbors? Was a building that had the word ‘children’ painted on it bombed? Are civilians in Mariupol being systematically starved and tortured to death? Unfortunately, the answer is yes.”

George Clooney’s Kids: Everything To Know About His Adorable Twins, Alexander & Ella