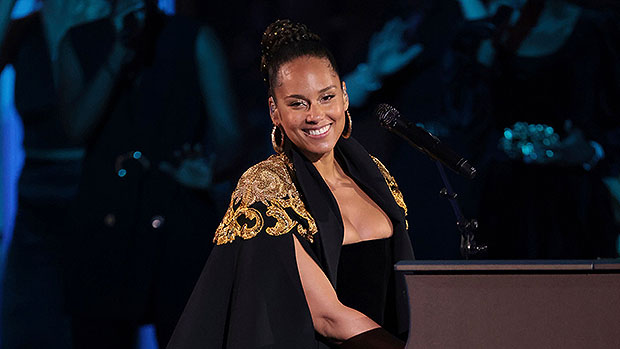 Queen Elizabeth officially welcomed some of the top musicians in the world for her Platinum Jubilee Concert! Among the many world-class acts who perfomed outside Buckingham Palace at the highly anticipated event on June 4 were Diana Ross, Sir Rod Stewart, Sir Elton John, Queen, Adam Lambert, Duran Duran, Ed Sheeran, and the immensely talented Alicia Keys. The beautifully styled Alicia, 41, sat down at a piano, and she looked naturally gorgeous wearing a cape with gold embellishments at the shoulders, a high ponytail braid, and dangly hoop earrings.

The “If I Ain’t Got You” icon performed “Superwoman” while a string orchestra and vocal chorus passionately accompanied her. She then sang “Girl on Fire” while bursts of flame erupted around her. She completed her set with a medly of “Empire State of Mind” in front of a massive crowd of 10,000 on the grounds of the palace, and even more via television and streaming services. The Saturday evening festivities were the culmination of several days worth of celebrations, beginning with the Trooping of the Colour Parade and commencing with luncheons, a church service, a classical concert, and a massive pageant commemorating Queen Elizabeth’s 70 years as a reigning sovereign — a distinction only she holds in the history of the U.K.

Alicia, a style icon at every appearance, is certainly a worthy choice for such a glittering celebration of the Queen’s distinguished accomplishments. She’s practically music royalty herself, with 15 Grammy Awards from 29 nominations, among other honors in the recording industry. “Tonight is celebrating the most magnificent superwoman” said Alicia while introducing her set. And she certainly wasn’t the only one to feel honored by the opportunity.

Alicia Keys Through The Years: Photos Of The Singer From The Start Of Career Until Now

“Queen Elizabeth has given incredible service to the United Kingdom over the last 70 years, and I’m delighted to be able to join her in celebrating her Platinum Jubilee with the Party At The Palace,” Sir Rod Stewart told Entertainment Tonight. “She has demonstrated to the world what a special person she is and how lucky we are to have her. This will be a momentous occasion.”

Diana Ross echoed the sentiment of her fellow performers, saying, “I have had the honor of meeting The Queen many times throughout my life, including when I was with my family,” she told the BBC in an official statement. “Her Majesty has and continues to be such an incredible inspiration to so many across the world, and I was absolutely delighted to receive an invitation to perform on such a momentous and historic occasion.”