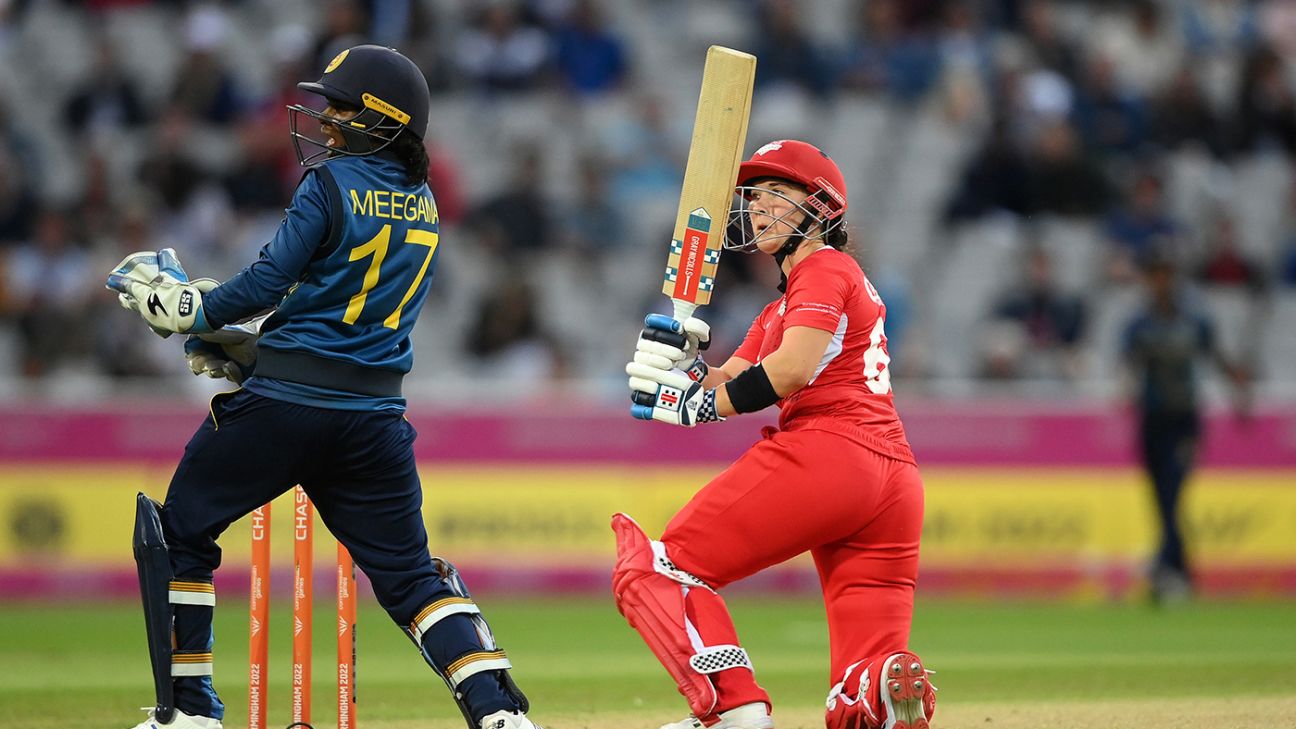 England deployed the youth-and-experience formula they hope will carry them to a home Commonwealth Games medal to good effect against Sri Lanka to open their campaign with a five-wicket victory at Edgbaston.

Between 37-year-old Katherine Brunt taking a wicket with the first ball of the match to Sophie Ecclestone‘s three wickets as the mainstay of England’s spin department and two wickets apiece for new seamers Issy Wong and Freya Kemp, qualifiers Sri Lanka never got going after winning the toss and opting to bat first.
But, after losing both openers early and then struggling to stem a steady flow of wickets, it fell to another newcomer, 17-year-old Alice Capsey, to help overhaul a paltry target of 107 with 17 balls to spare, her innings of 44 off 45 balls seeing England home by five wickets.

In with the ‘old’

Brunt, handed a commemorative cap to mark her 100th T20 international by former England team-mate Isa Guha before the match, struck with the first ball when she pinned 16-year-opener Vishmi Gunarathne with a ball that was on target to crash into her middle and leg stumps.

Ecclestone, another veteran of this England side at just 23 given her seven years of illustrious service so far, was steered away for four through third by Hasini Perera as soon as she entered the attack in the sixth over. But left-arm spinner Ecclestone responded moments later with a calm-as-you-like caught-and-bowled after Perera struck the ball hard back at her to depart for 17 and Sri Lanka ended the powerplay at 35 for 2. Ecclestone roared back in the final over, claiming two more wickets to end with 3 for 25 from her four overs.

In with the new

Kemp, the 17-year-old left-arm seamer who made her international debut five days earlier, struck with her first ball of the Games, taking the prize wicket of Sri Lanka captain Chamari Athapaththu for a cautious 10 off 18 with a beauty that straightened slightly off the seam to pluck off stump out of the ground.

Kemp had taken 2 for 18 in Monday’s third T20I against South Africa in Derby as England completed their preparations for this event. She had her second wicket of this match when Kavisha Dilhari spooned the ball straight to Capsey at short cover.

Then, carrying on the youth theme, Wong, the 20-year-old Birmingham local, returned to the attack with a double-wicket maiden in her second over. Wong had Nilakshi de Silva caught simply by Danni Wyatt at point and dismissed Anushka Sanjeewani with a short ball that found the edge as the batter attempted to pull and keeper Amy Jones grabbed the ball above her head as Sri Lanka slumped further to 74 for 6.

As if to tie the innings off with a bow, Brunt sat under a high ball as Ama Kanchana skied Sarah Glenn to mid-off, Brunt lying on the ground after completing the catch, arms spread in something resembling relief, or satisfaction, job done – although it wasn’t quite for England as Ecclestone returned to seal a commanding effort for the host side with the ball.

England didn’t have it all their own way with the bat. Wyatt fell in the second over of England’s pursuit, well caught by Kanchana off the bowling of Oshadi Ranasinghe at mid-off, but then Dilhari put down a chance off Sophia Dunkley, on 15, when, having struck Acchini Kulasuriya for two fours, the opener chipped straight to cover. But Ranasinghe claimed her second a short time later when she bowled Dunkley attempting to play across the line of a slower ball and England were 26 for 2.

After nine overs, England were 59 for 3, compared with Sri Lanka’s 52 for 3 at the same stage of their innings, after Nat Sciver added 17 runs off 14 balls and her attempt to overturn a plumb lbw decision off the bowling of Inoka Ranaweera failed. That became 63 for 4 when Jones provided Ranaweera’s second wicket, edging to Kumari at point.

But Capsey, sporting a huge shiner under her right eye after a fielding accident during the warm-up, marshalled the remainder of the run chase, in just her third international match and second innings with the bat. Having impressed with a 17-ball 25 against South Africa on Monday when she came in at No. 3, Capsey retained that spot and provided stability for England with a mature innings featuring four boundaries. She was joined by Maia Bouchier in a 42-run partnership for the fifth wicket and, after Capsey was stumped off the bowling of Ranaweera with England needing just two runs to win, it was Bouchier who brought up victory, slamming the next ball, from Athapaththu, for four through long-on.