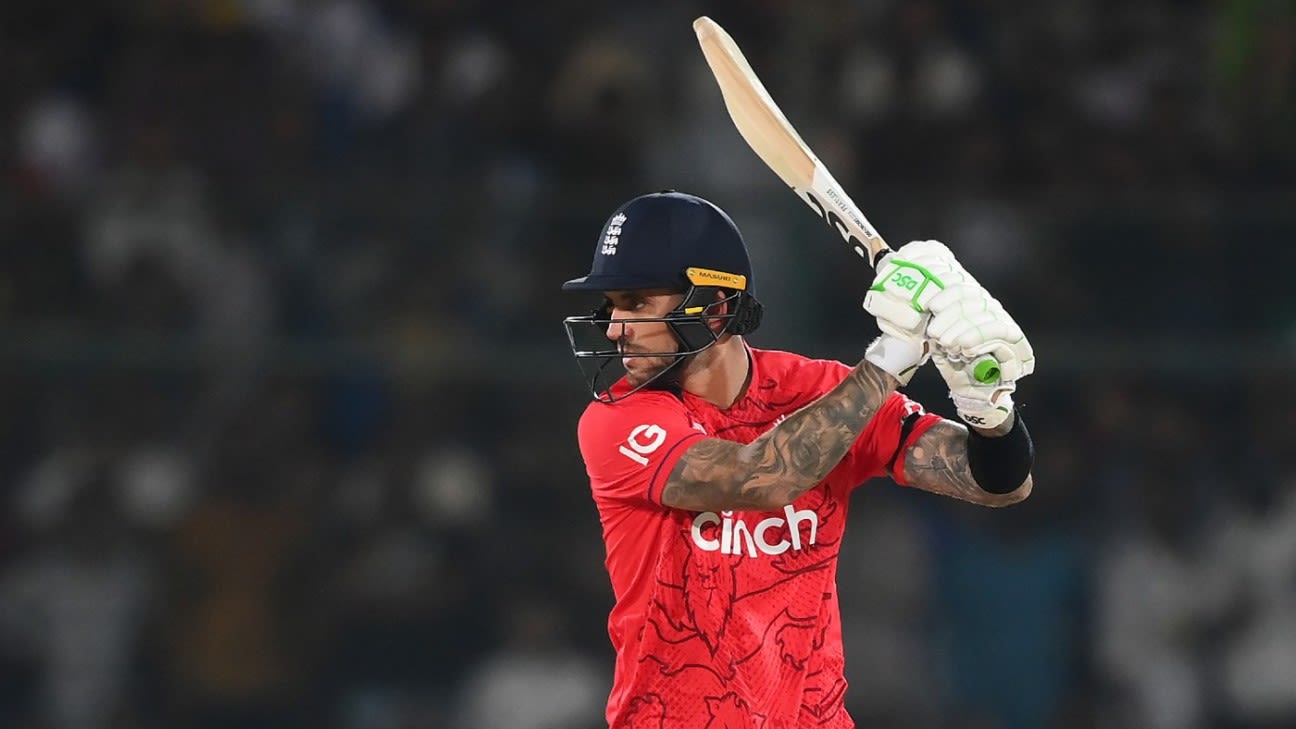 Alex Hales made a half-century on his first England appearance in more than three years as the tourists began their seven-match series by completing a comfortable chase under the Karachi floodlights. Hales fell for 53 off 40 with 17 needed but an unbeaten 42 from Harry Brook, in his fifth T20I, saw England home with four balls to spare.
Having been inserted at the toss, Pakistan’s innings was once again built around a solid opening stand between Mohammad Rizwan and Babar Azam. Rizwan continued his good form from the Asia Cup, top-scoring with 68 from 46, but the middle and lower order failed to fire, Iftikhar Ahmed’s three sixes in 28 from 17 providing only a flicker of the aggression needed on a placid batting surface, as England debutant Luke Wood finished with 3 for 24

In response, Hales was the glue that held England’s chase together. Phil Salt was brilliantly held at deep square leg and Usman Qadir struck with his second ball to remove Dawid Malan; but Ben Duckett swept and reverse-swept – with varying degrees of success – to keep the required rate in hand. Brook then produced perhaps the most fluent innings of the night, producing a number of eye-catching shots in his 25-ball innings, including the winning hit over extra cover.

Hales prevails after long wait
It had been 1291 days since Hales last batted in an England shirt, and plenty of water has flowed under the bridge in the intervening period. Plenty of runs have flowed from Hales’ bat, too, and he continued that prolific form in the shortest format with his first T20I fifty since July 2018 (1538 days ago, to be precise).

His second legitimate delivery was clattered through backward point in trademark, long-levered style and, although he was not at his most fluent, there was plenty of ringcraft about Hales’ innings as he anchored the chase. Three of his first seven balls went to the rope, as he looked to push England ahead of the required rate, but he was then content to tick along – although content might not be the right word, on the evidence of several frustrated yells as he struggled for timing during the middle overs.

Hales only managed one boundary with the field out between the seventh and 14th overs, and on 28 from 22 he was dropped in the deep by Shan Masood looking to manufacture a slog-sweep off Usman Qadir. But the target was always in range and, with 52 needed from 36, Brook and Hales suddenly clicked into gear, the latter going from 38 off 32 to 53 off 39 before holing out to cover with only the finishing touches required.

Pakistan’s opening statement
Despite their gluttonous exploits as an opening pair, there has been a little heat on the Babar-Rizwan combination recently https://www.espncricinfo.com/story/mohammad-wasim-backs-babar-azam-and-mohammad-rizwan-to-improve-strike-rate-1334809. Babar made 68 runs in six innings at the Asia Cup and, while he clearly needed time in the middle in search of some form, there had been a suggestion that Rizwan would be rested, allowing Masood to bat in his preferred position at opener and Mohammad Haris to take the gloves.

Instead, Rizwan’s was name was in its usual spot on the teamsheet at the toss, and the regular openers walked out together after England had opted to bowl. Rizwan was busy looking for singles and Babar stroked his first ball through the covers; boundaries were picked off around the ground as they raised their ninth 50-plus opening stand for Pakistan. Moeen Ali was smoked over long-on as Rizwan went to a 32-ball fifty.

But things began to go awry towards the middle of the innings. First Babar was unstitched by Adil Rashid’s googly, ending the partnership at 85 in the tenth overs. Haider Ali, playing his first T20I in nine months, struggled to get going before holing out off Sam Curran. And although Rizwan equalled Babar’s record as the fastest man to 2000 T20I runs https://stats.espncricinfo.com/ci/content/records/1213211.html, he was stumped off Moeen Ali just when Pakistan were looking to him to kick on. When Masood, on T20I debut at No. 4, top-edged a reverse-sweep to the edge of the ring for 7 off seven balls, Pakistan had lost 4 for 35 off 35 balls.

Once again, Pakistan’s top three had made more than two-thirds of the team’s runs – in this case 69% – but having faced 83 out of 120 balls (also 69%). Whether that is an ideal distribution of resources is a debate that will continue to rage.

Good Wood
Having been an unused member of the ODI squad in the Netherlands earlier this year, Wood finally won his first England cap in any format. The third left-armer in the XI, alongside David Willey and Sam Curran, Wood brought a few mph extra pace to the equation – as well as the confidence of an impressive season in the Hundred, where he led the attack for eventual champions, Trent Rockets.

Usually charged with the new ball in search of early swing, Wood was instead first change, but conceded just 12 runs from his two overs in the powerplay. When he returned later in the innings, he produced a beauty to clean up Mohammad Nawaz for his first international wicket, nipping the ball back past an expansive swing to flatten off stump. Just four runs came off the 18th over and although he started the 20th with a full toss that sailed for six, a sequence of W-1-W-dot-1 meant England finished in confident mood.

Alan Gardner is a deputy editor at ESPNcricinfo. @alanroderick