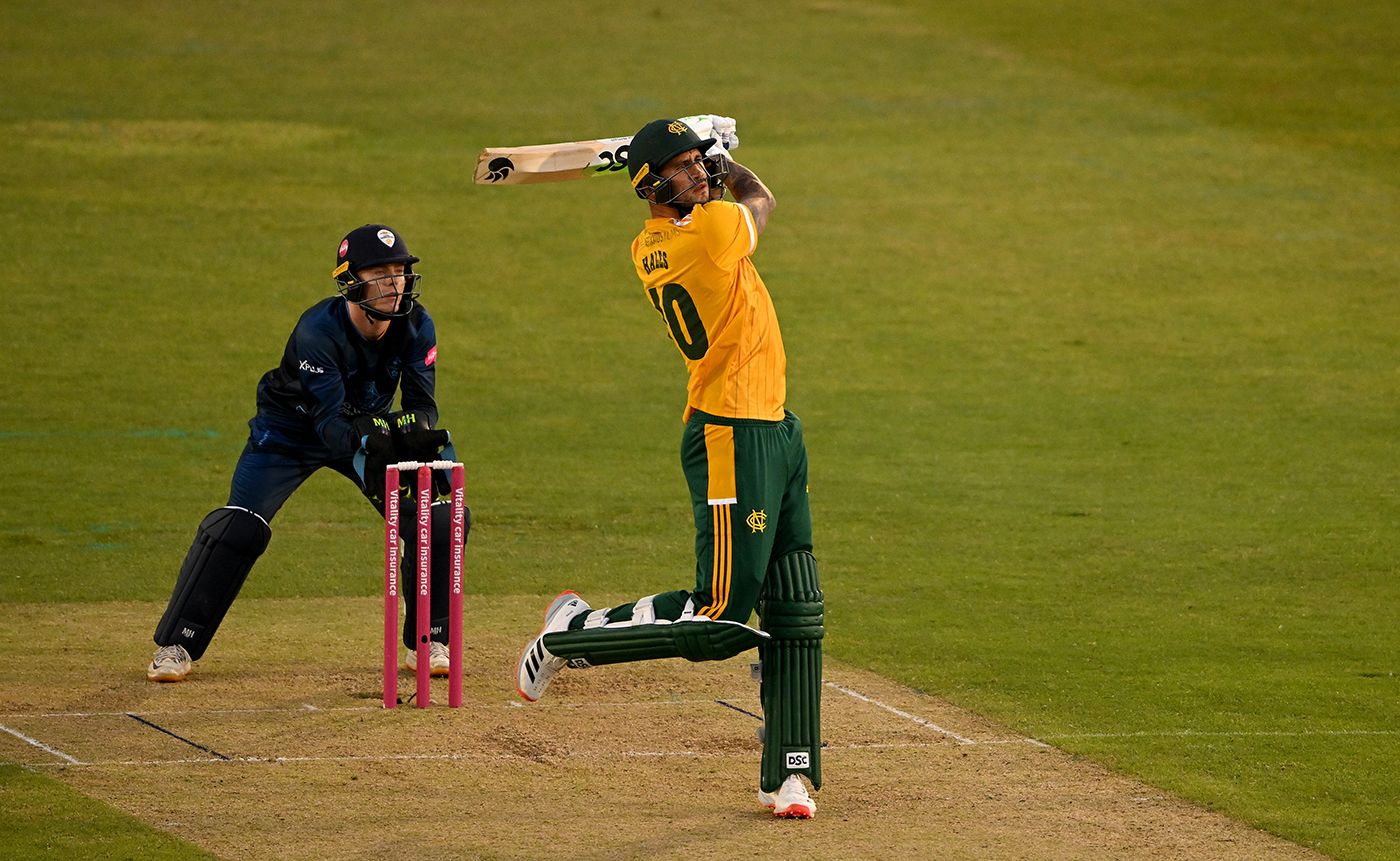 A stunning display of muscular hitting from Alex Hales powered Notts Outlaws to a seven-wicket Vitality Blast win over Derbyshire Falcons at Derby.

Hales demolished the bowling, smashing 12 fours and five sixes in a superb 91 which came off only 33 balls. He dominated an opening stand of 119 from 51 balls with Joe Clarke as Outlaws chased down Falcons’ 178 in the 18th over.

Leus du Plooy top scored with 51 and Wayne Madsen made 40 but Jake Ball pegged the Falcons back by taking three wickets in the final over to finish with 4 for 40.

Falcons started slowly after being put in but took flight when Luis Reece pulled James Pattinson for two sixes in the fourth over which cost 20. Shan Masood relied on pure timing to ease Matt Carter through the covers for four and the Falcons skipper scored three more boundaries when Ball returned in the last over of the powerplay.

Falcons were motoring at 60 for 0 but Outlaws slammed on the brakes when Calvin Harrison bowled Masood for 33 from 23 balls as he stepped away to cut.the legspinner.

Reece went for 27 in the next over, stumped charging Samit Patel, and the spinners conceded only 24 from four overs to leave Falcons on 84 for 2 at the halfway point of the innings.

Pattinson and Steven Mullaney kept up the pressure but Madsen reverse swept Matt Carter for six before du Plooy drove the offspinner over the ropes at long on with 17 coming from the 14th over. du Plooy went to 50 off 33 balls before he failed to beat Dan Christian’s throw from cover but Madsen drove and pulled Ball for three consecutive fours in the 18th over.

Ball responded by bowling Madsen but Harry Came lifted Pattinson over the midwicket boundary as 15 came from the penultimate over.

Ball took three wickets and conceded only four runs in a superb final over to keep Falcons under 180 but what looked a competitive total was shredded by Hales.

He launched the chase by driving Sam Conners for two fours and then swept Mark Watts for six before tucking into George Scrimshaw. The fast bowler was pulled for six and driven for three fours with 20 coming from the fourth over and another 18 came from the next over as Hales raced to 50 off only 18 balls.

Hales took Conners apart in the sixth over, smashing a six and four fours to take Outlaws to 95 for 0 at the end of the powerplay. He drove Matt McKiernan for two more sixes but the legspinner broke the stand in the ninth over when Clarke swept him to deep square leg.

Hales’s brutal innings ended when he skied Scrimshaw to long leg but Outlaws now needed just 52 from the last 10 overs. Scrimshaw removed Ben Duckett but Patel completed 25,000 career runs in all formats as Outlaws cruised home with 17 balls to spare.