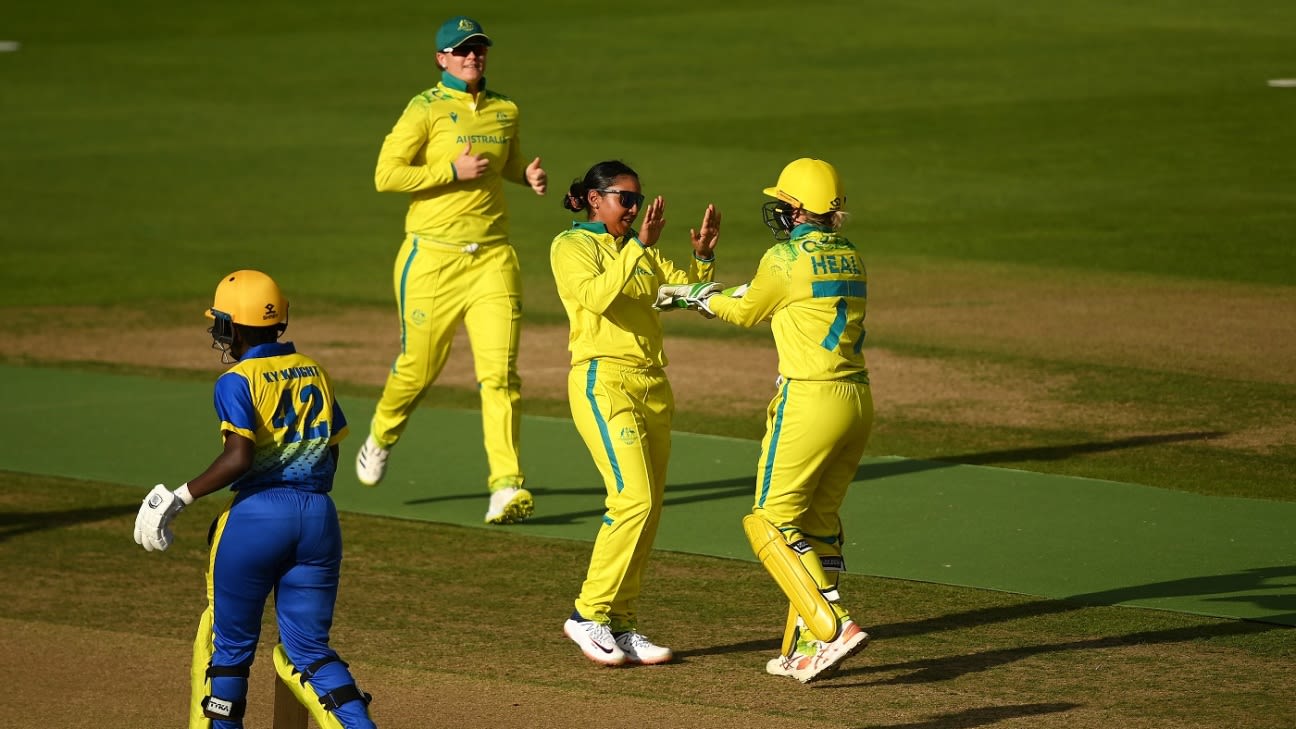 A career-best 4 for 8 – and a near hat-trick – for Australia legspinner Alana King led her side to an emphatic nine-wicket victory over Barbados and into the Commonwealth Games semi-finals.
Meg Lanning, the Australia skipper, went a good way towards making up for dropping the catch that would have given King her hat-trick with an unbeaten 36 from 21 balls as she and Alyssa Healy mowed down a paltry target of 65 with 71 balls to spare.

Tahlia McGrath and Ashleigh Gardner added three and two wickets respectively as Barbados’ experienced top order crumbled and Australia kept them to a total that was always going to be nigh on impossible to defend against such formidable opposition.

Gold-medal favourites Australia are top of Group A with two wins from as many matches and they face winless Pakistan in their final group game on Wednesday when India and Barbados, with one win each so far, face off for the other semi-final berth.

Not this time, captain

Having scored a half-century and shared a 107-run partnership with Kycia Knight in their opening victory over Pakistan, Barbados captain Hayley Matthews cashed in as Darcie Brown struggled with her line and length to begin with. Matthews cut Brown’s first ball through backward point for four like a rocket and unfurled a cracking cover drive to find the boundary again three balls later. She steered the first ball of Brown’s next over through the covers then swung her over the leg side for consecutive boundaries, but Brown responded when she had Matthews out attempting to swat her over the leg side again only to sky the ball to a waiting Grace Harris at mid-on. Matthews was furious with herself, falling for a 13-ball 18, which she wasn’t to know would make her the top-scorer of a dismal Barbados innings.

When Matthews’ opening partner, Deandra Dottin clubbed Brown over extra cover for four it was her first shot in anger after facing a maiden from Jess Jonassen in just the third over and she ended the powerplay with just six runs from 20 balls faced.

King entered the attack in the eighth over and struck with her second ball, brushing the outside of Dottin’s front pad as she knelt down to tuck the ball down to fine leg right in line with middle stump and umpire Sue Redfern’s lbw decision was upheld when Dottin reviewed, the ball clearly hitting middle stump a third of the way up. Dottin finished with just eight runs from 22 balls with a meagre strike rate of 36.36.

McGrath struck second ball when she had Kycia Knight, Barbados’ top-scorer in the first match with an unbeaten 62, easily caught by Megan Schutt at deep backward square. Kyshona Knight then chipped Gardner to Harris at midwicket as Barbados slid deeper into trouble at 49 for 4 and into their inexperienced batters. Gardner was excellent bowling her off-breaks, sending down 17 dot balls in her four overs and finishing with 2 for 6 after she removed 18-year-old Trishnan Holder for nought to seal a double-wicket maiden.

McGrath finished with 3 for 13 as she ate into the tail but it was King who ruled on a slow pitch that has now staged six matches in this tournament. King accounted for Aaliyah Alleyne, taking a wild swing across the line of one that ripped out leg stump and then pinned Shamilia Connell on the back leg next ball. King should have had her third immediately but 33-year-old international debutant Keila Elliott’s edge popped straight out of Lanning’s hands at slip. Usually so reliable in the field, Lanning lay face down on the turf for some time afterwards as King held her hands to her head, a brave smile painted on her face.

Lanning all but made up for her blunder when she led Australia past the target, letting loose after a sedate start. Healy was uncharacteristically quiet early – she faced 14 balls for her first four runs after Australia lost Beth Mooney, stumped by Kycia Knight off the bowling of Shanika Bruce in the second over of their reply.

But Lanning punished some loose balls from Dottin in the sixth over, which went for 25 runs to close out the powerplay with Australia needing just 23 runs more. Back-to-back sixes swung powerfully over the leg side – the second off a high full toss that was called as a no-ball – in Dottin’s first over set Australia properly on their way. A wide preceded an unconventional four as Lanning stepped back and stuck her bat out as she toppled forwards along her crease and managed to steer the ball to the boundary through third.

Healy then began to find the rope with back-to-back fours off Matthews and Elliott in the next two overs before Lanning swatted Shakera Selman to the square-leg boundary to bring up the winning runs and a resounding victory.